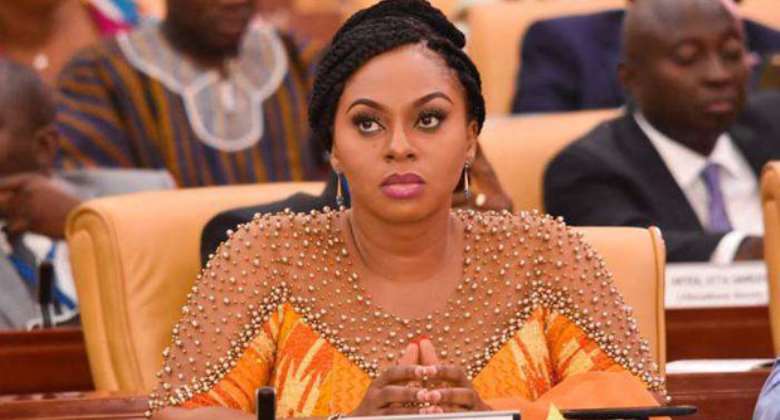 It is alleged that Adwoa Sarfo, the MP for Dome Kwabenya is holding her own party to ransom by tabling certain demands she expect fulfilled before she comes to vote for the E-levy bill

It is further alleged that She is demanding among other things; to be made the deputy majority leader before she comes out from her base to give the NPP that one important vote to consolidate their majority status in parliament in order to pass the "infamous" E-levy bill.

Some party stalwarts have called of the bluff of her by suggesting that she's blackmailing the party. In fact, others have asked for her seat to be declared vacant if she is unprepared to do the business for which she was elected to do.

The sack Adwoa Sarfo crusaders in her own party cite portions of the parliamentary standing orders and the Constitution to make the point that she should be sacked from parliament on the basis of her 15 or more days absent from the chamber without proper permission.

Already, we read in the news that the NPP leadership is meeting or have met to decide on the fate of madam Adwoa Sarfo considering the huge void her absence is causing the business of the government in the house.

In the interim, we do not know the official position of the party on this matter but it does appear the party is in a serious dilemma situation. Any decision on this matter comes with it own ramifications.

A careful look at the issue seems more complicated than many pundits have thought. Should the NPP declare Adwoa Sarfo's seat vacant, that could create a serious problems for the party. However, if nothing is also done about it, the party is also in a standstill for its policy advancement. I analyse the impact of this problem from these two possibilities;

1) should the party decide not to declare her seat vacant but chooses the path of diplomacy to get her come; which I suspect they may have tried, that may be good but until when will this diplomatic persuasion convince her to come vote. Time is of essence in this E-levy bill, every minute delay causes revenue lost to government and the big question is until when will the party win her mind.

2) should the party decide to declare her seat vacant, that will most likely create more division and political snafu in a party that is rumoured to be polarising each day due to the pending internal contests. There could also be legal tussle or a clearly divided front with pros and cons of Adwoa if the party chooses such an option.

Moreover, any decision to declare her seat vacant might not be politically wise as an option because she (Adwoa) might contest as an independent candidate which might split NPP's vote to give a clear advantage to the NDC to win the Dome Kwabenya seat for the first time.

A victory for the NDC in a Dome Kwabenya bye-elections will mean the NDC will have a clear majority in parliament that will stir matters more murkier for the NPP. Besides, by the time the bye-election processes are completed, time would have been far elapsed for the urgency needed for the passage of the E-levy.

Well, as we round our heads over this political quagmire, the woman in this whole case is tik toking with a beautiful dance steps and full of praise to God for, perhaps, "creating this type of parliament where every MP can use quip pro quo to bargain for his or her interest"

Bawku Conflict : NMC cautions against "weaponization" of med...
7 minutes ago