Who's Zooming Whom In SAP And HIPC? 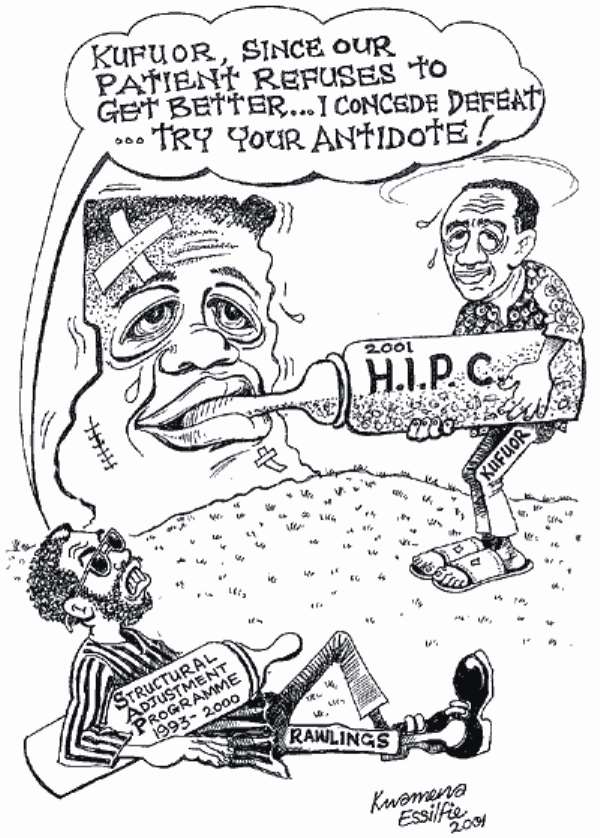 Socrates' declaration, “the unexamined life isn't worth living”, marking the beginning of human consciousness and introspective thought has never been so true in Ghana's 47 years of nationhood.

In human evolution a new kind of thought has always arisen because all the accumulated experience of the past hasn't been enough to help people cope with the increasingly complex world order. While many nations have looked backward at history for a sense of where they have been as a people, a new kind of thinking has arisen through introspection, one that looks at the pitfalls of the past and prescribes radical new ideas to solve problems of the time. This Ghana has failed to do as a nation, and is paying the price.

President Kufour and his NPP government promise of change in the 2000 elections, many thought, was a conscious and introspective approach different from Ghana under Rawlings and the NDC. As Ghana's main opposition party in the 90s, Kufour and the NPP were seen as the embodiment of Ghana's consciousness and sensibilities, and therefore the party's call for change, many thought, was also a call for national introspection leading to a new kind of thinking in solving the country's social and economic problems. One such introspection is Ghana's long history and sometimes-raucous relationship with the International Monetary Fund (IMF) and the World Bank (WB) dating back to Dr. Nkrumah's government. In the face of overwhelming evidence of serious economic hardship that has befallen our country in dealings with the IMF/World Bank under the Structural Adjustment Program (SAP), it is surprising that the present NPP government is at full throttle with the very programs that have caused so much hardship to many Ghanaians and destroyed everything we have gained as a country since independence.

Our history with the IMF/World Bank is a sordid one. In 1965, a year before the overthrow of Nkrumah's government, Ghana made her first approach to the IMF/World Bank for financial assistance at the time of declining cocoa prices. The IMF/World Bank prescribed non-inflationary borrowing and curtailment of government spending as preconditions for the loan. Nkrumah found these conditionalities unacceptable and declined the loan. Accepting the IMF/World Bank loans and conditionalities would not only have affected the momentum of Nkrumah's economic development strategy but would have scuttled it altogether, because it forbade Nkrumah from all capital spending, i.e. the schools, hospitals, and particularly his pet economic program; the import substituting industrialization.

Nkrumah's overthrow in 1966 paved the way for a cozy relationship between the new military government, the NLC and the IMF/World Bank. Within three months of the coup, Mr. J. H. Mensah (currently NPP's Senior Minister) who was NLC Finance Minister had satisfied the IMF/World Bank conditionalities sufficient enough to acquire a stand/by credit. During three years of the NLC rule, and in keeping with IMF/World Bank conditionalities, all economic projects that were started or in progress by Nkrumah were branded inefficient and suspended indefinitely or completely abandoned. The cozy relationship with IMF/World Bank continued under Busia even though his Finance Minister, the same J.H Mensah who implemented IMF/World Bank conditionalities under NLC, was strongly opposed to another IMF/World Bank interference in Ghana's economic affairs. Busia, however, ignored his Finance Minister and on December 27, 1971 announced the IMF packages including the devaluation of the cedi. Immediately, prices of basic items like sugar, rice, and milk shot up. Seventeen days later, on January 13, 1972 the government was overthrown by the military. The coup makers led by then Colonel Ignatius Acheampong capitalized on the general dissatisfaction of Ghanaians after the implementation of IMF policies.

Acheampong accused Busia of “permitting excessive international influence…” and dismantled the IMF draconian economic policies, repudiated Ghana's external debts, and launched the very successful self-reliant policy with the twin programs, Operation Feed Yourself, and Operation Feed Your Industries under the catchy slogan of “grow what you eat and eat what you grow”. He also seized 55 percent of equity shares in foreign mining and timber businesses, 50 percent shares in the breweries, and 40 percent shares in foreign owned banking and insurance companies. Acheampong was very successful with his nationalistic policies for the first three years and resisted IMF/World Bank until the palace coup in 1978. When General Akuffo took over power, the IMF/World Bank descended on the country once again and put in full force the conditionalities planned under Busia. Rawlings in June 4, 1979 terminated the IMF/World Bank structural adjustment program after his coup before transferring power to Hilla Limann. Limann's government also had to contend with IMF/World Bank, but dilly-dallied with the implementation of the latter's conditionalities for fear of public backlash until Rawlings' second coup in 1981.

Ghana, from 1983 to 1999, became the pet country and the darling of the IMF/World Bank as Rawlings employed his authoritarian, dictatorial powers to put in full force the most stringent IMF/World Bank structural adjustment programs ever known on the continent of Africa. Rawlings devalued the cedi, downsized public service, raised interest rates, sold off 75% of the 300 state-owned enterprises mainly to foreigners at bargained prices (after the devaluation of the cedi), liberalized trade, removed all subsidies, and reduced government spending in all sectors including health and education. As a result, Ghana forfeited control over its natural resources, especially in the mining sector, through foreign direct investment and destroyed its infant industries through trade liberalization and removal of subsidies. Devaluation and domestic inflation led to higher food prices, which were not matched by similar increases in wages. Good education and health care became the privilege of the rich, and youth unemployment and homelessness have never been worse in our 47 years as a nation. Yet the IMF/World Bank touted Ghana as being one of Africa's best success stories mainly because during the years 1983-1999, Ghana's GDP grew 5-6%.

Today we have a government under President Kufour, which, having lived through the devastating effect of IMF/World Bank policies as opposition party, is spewing out these same nonsensical statistical GDP numbers in complicity with the IMF/World Bank to justify the continuous strangulation of Ghana's economy and sellout of our sovereignty through HIPC. From 1983 to the present 2004, Ghana's domestic budget has been vetted, revised, and approved by IMF/World Bank technocrats in Washington with our government having little or no say whatsoever in how we manage our own affairs. How gullible and silly can we be? Our Finance Ministers from Kwesi Botchway to Osafo Marfo have been taking their marching orders from the IMF/World Bank since the inception of SAP and HIPC. So much for Ghana's hard won INDEPENDENCE. Yet the NPP spin-doctors are quick to point out to the suffering masses that the party is “laying a solid foundation for economic takeoff”, ignoring the fact that in 1990, after seven years of rigorous implementation of IMF/World Bank structural adjustment programs, Rawlings and his NDC government said the same thing when they established the National Development Planning Commission (NDPC) and charged it to “lay the foundations for accelerated economic growth”. So what are Kufour and his NPP government doing differently from what Rawlings and the NDC government did from 1983 to 1999? For Christ's sake, let us use our brains.

Three years into another IMF/World Bank structural adjustment programs under the NPP government, Ghanaians are worse off than before; our schools are in desperate need of repairs and improvement, our hospitals have become a graveyard for the poor and the most vulnerable members of our society, youth unemployment and homelessness continue to be a national tragedy, our state assets and natural resources are on the auction block for rich foreign buyers, our local markets are flooded with foreign goods killing our local industries, major government contracts are awarded to foreign companies, high inflation, higher interest rates, and a free-falling cedi. Ghana has literally become a beggar country as 40% of our domestic budget is financed through donations from the so-called “development partners”. This is the sad reality of our plight under Rawlings' NDC and Kufour's NPP in cahoots with the IMF and World Bank. If Kufour and his NPP government care to know, the IMF and the World Bank have promoted SAPs as a virtual religion for nearly 20 years in 75 countries including Ghana, yet they cannot even claim that they have achieved a reduction in these countries' debt burden. We should also not forget that it was Ghana's heavy debts that forced Rawlings and the PNDC to succumb to pressure from IMF/World Bank to pursue structural adjustment program in 1983. Yet despite these unprecedented harsh economic measures aimed at reducing or paying off the debt, Ghana's debt ballooned from $2 billion in the 1980s to $6 billion in 2000, and still climbing.

Why would any Ghanaian in his/her right mind vote for either NPP or NDC in the coming elections? These two political parties have demonstrated they have no new ideas, and we the electorate who have borne the blunt of their corruption and lack of direction, must bury our partisanship and tribal sentiments, and send them a clear message by voting them out in the 2004 elections. It is the only power we have to clean up Ghana politics and rid ourselves of these puppets. If we vote Kufour and the NPP out in 2004, and also prevent Atta-Mills and the NDC from regaining power, the IMF/World Bank and the so-called Paris Club will truly and surely sit up and review the draconian economic measures they have imposed on our citizens just as they did in 1974 when Kutu Acheampong's actions forced them to reschedule Ghana's foreign debts on liberal terms. We have both the human and natural resources to succeed as a nation; all we need is Kutu Acheampong's courage and ingenuity, Dr. Nkrumah's foresight and self-confidence, and economic development lessons from Taiwan, Hong Kong, and Singapore to move our country forward. Enough is enough. Yaw Oduro Ontario, Canada Views expressed by the author(s) do not necessarily reflect those of GhanaHomePage.

Government drinking from an empty calabash, debt forgiveness...
40 minutes ago