Blinken to meet Lavrov, but will first talk with French, German and UK counterparts after Kyiv visit 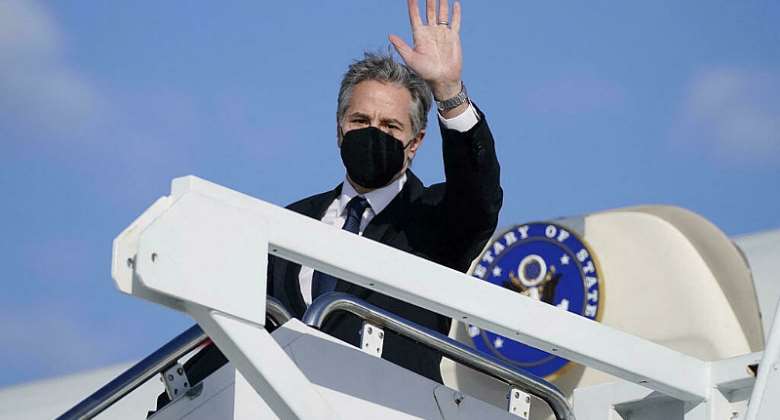 US Secretary of State Antony Blinken on Wednesday urged Russian President Vladimir Putin to choose the "peaceful path" on Ukraine, as he visited Kyiv to show support before crunch talks with Russia later this week.

But he will first travel to Berlin, where he will meet with German Foreign MInister Annalena Baerbock and their French collegue Jean Yves Le Drian. He will also meet British Foreign Secretary Liz Truss.

Blinken, who is due to meet Russian Foreign Minister Sergei Lavrov in Geneva on Friday, said he would not present a formal response to Russian proposals at the talks, despite Moscow's demands.

He said the onus was on Putin to dispel fears that Moscow is planning an invasion of its pro-Western neighbour.

"I strongly, strongly hope that we can keep this on a diplomatic and peaceful path, but ultimately, that's going to be President Putin's decision," Blinken said on a day-long visit to Ukraine.

With tens of thousands of Russian troops massed on the Ukrainian border, tensions between Moscow and the West have reached a post-Cold War high and there are growing fears of a major conflict in Eastern Europe.

Moscow insists it has no plans to invade, but is demanding wide-ranging security guarantees - including a ban on Ukraine ever joining NATO - in exchange for deescalation.

Little headway
Days of talks between Western and Russian officials in Geneva, Brussels and Vienna last week made no headway in resolving the crisis.

Days before Blinken travelled to Europe, French President Emmanuel Macron argued in a speech before the European Parliament that Europeans needed to build their own "collective security framework" and rearm themselves.

He appeared to be suggesting that Europe needs to work outside of the US-led NATO alliance that guarantees security for most EU states.

"Security on our continent requires strategic rearmament," he added, saying that "frank and demanding" talks with Russia were also needed.

"As Europeans, we need to collectively make our own demands and put ourselves in a position to enforce them," he said.

The European Union was not involved in the direct talks with Moscow last week.