Tigray conflict: A call for peace before Ethiopia is turned to a Libya of east Africa 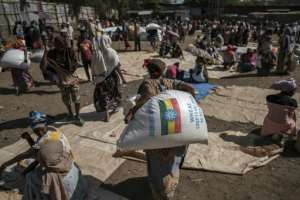 The ongoing Tigray conflict in Ethiopia has been described by observers as a taste of déjà vu and an impending balkanization. The East African country is sprinting toward a deep turmoil, and events of the past weeks are clear warnings that the two major warring parties, the Ethiopian federal government and the Tigrayan People’s Liberation Front (TPLF), and their allies must heed the calls for peace before they plunge the second most populous African country into another Libya-like state.

The conflict started on 4 November 2020 when Ethiopia's prime minister, Abiy Ahmed, ordered military operations in the Tigray region. He claimed he did that in response to an attack on a military base by TPLF rebels. The reaction was a culmination of months of feuding between the Abiy-led central government and TPLF leadership.

Since 1994, the country has run a federal system, with different ethnic groups controlling the affairs of 10 regions. One political party, TPLF, was the major element in setting up this system. It led the coalition that ruled Ethiopia from 1991 after the exit of a military regime. The four-party coalition brought many positive changes and stability to the country, but there were also growing concerns of human rights abuses and suppression of dissent voices.

This would later escalate to protest, leading to a major reshuffle that brought Abiy Ahmed as the current prime minister in 2018. Within his short term in power, Abiy made significant reforms that earned him national and international acclaim, including a Nobel Peace Prize in 2019. His liberalised politics and radical reform programmes brought an end to the long-existing territorial conflict with neighbouring Eritrea.

While his popularity grew for these laudable achievements, key Tigrayan government leaders felt sidelined and perceived his approach as a move to centralize power. The discontent escalated in September 2020 when Tigray held its regional election in defiance of the central government's postponement of national elections.

In its reaction, the central government stopped funding to Tigray, a move that the latter perceived as a "declaration of war." Unfortunately, what began as a political tussle has now resulted in a seemingly unending conflict with thousands of deaths and displacements.

A few days ago, as the TPLF rebel forces and their allies closed in on the capital, Prime Minister Abiy Ahmed travelled to the frontline and vowed to lead Ethiopian troops into battle himself. “We won’t give in until we bury the enemy,” he boasted.

In its response, a spokesperson of TPLF claimed Abiy’s leadership “chokehold on our people” and vowed to continue the rebels’ “inexorable advance.” The ego-driven adamance from both parties explains why the conflict is biting so hard on Africa's second-most populous country.

A joint investigation by the Ethiopian Human Rights Commission and the Office of the United Nations High Commission for Human Rights show that all parties in the conflicts have committed violations that may amount to war crimes.

Though the exact toll of the economic and humanitarian ramifications is hard to assert, there is glaring evidence that the downturns are devastatingly worrisome. In just a little over a year, thousands of people have been killed, including children who died by starvation. In addition, it has escalated the refugee crisis in East Africa, as over 60,000 people have fled the country and around two million people are internally displaced.

Appalling gender-based violence against girls and women and other human rights and refugee rights abuses have reportedly been committed. More than 5 million people are also said to be in urgent need of humanitarian assistance in the Tigray, Amhara, and Afar regions. The much-needed aids have been very slow in reaching the victims. In August, the United States international development agency accused Abiy’s government of "obstructing" access to Tigray at the time food houses were "virtually empty."

"This shortage is not because food is unavailable, but because the Ethiopian government is obstructing humanitarian aid and personnel, including land convoys and air access,” USAID chief Samantha Power alleged.

Instances like this explain why the country is experiencing its worst famine-like crisis in decades. Though the first humanitarian convoy (of around 40 trucks) in over a month entered the Tigray region, it is believed that there is still a need for 100 trucks a day to meet the current local population’s most basic needs.

The continental and intercontinental international community have called on both sides to toll the line of peace, but neither side appears to be willing to listen. Abiy’s body language suggests there is a suspicion that the international community wants to remove him, as his administration described efforts by foreign governments as meddling. He, therefore, seems to have resolved to a winner-takes-all measure in approaching the conflict. The TPLF and its Tigray Defence Forces (TDF) also seem to see no value in negotiations, especially given its recent advances.

The United States and the European Union have once halted aid to Ethiopia in a bid to see the conflict come to an end, but the sanctions have now been withheld to give rooms for negotiations to bear fruit. At the continental level, the African Union (AU) has also been making diplomatic moves to bring the conflict to an end. Meddling in the crisis is an unusual ally to the Ethiopian government, Eritrea, whose institutions and officials have played destabilising roles in the conflict. The United States recently sanctioned the Eritrean military for its peace-undermining roles in the crisis.

Abiy’s journey from enviable international commendation to condemnation has been so swift, and so is Ethiopia's status from a peaceful, progressive nation to a war-torn country. Its deep sense of independence and freedom as the only uncolonized country in the continent, coupled with its recent economic strides and political reforms, make Ethiopia Africa’s pride. Many countries in the horn of Africa and continent-wide look up to it for leadership. Its highly ambitious developmental measures have also been cited as a model worth emulating by other countries.

Unfortunately, the downsides of the war have battered the country’s economy and derailed its trajectory, as it now suffers some of the greatest humanitarian tolls, including famine. Fear also grows that the country is fast tilting towards a Libya of East Africa, especially as striking similarities can be drawn between the two countries in terms of growth and conflict-induced fall.

Like Ethiopia, Libya was for many years one of the fastest-growing economies in Africa and regarded among Africa's richest countries until the 2011 uprising that led to a civil war and international military intervention. Today, the once oil-rich prosperous North African country is now a shadow of itself, a socioeconomic retarded state, and a den of human trafficking and modern slavery.

The Tigray conflict could also be viewed as a taste of déjà vu, especially as the conflict took a similar dimension with the Eritrea bloody breakaway from Ethiopia three decades ago. Thousands of Eritrean soldiers and civilians paid the ultimate price, and several other human costs were recorded in the self-determination war that lasted between 1961 to 1991.

Given the vigour with which both sides have pursued the war and the successes recorded so far, compromise from either party may appear a sign of weakness to their followers. However, considering the already witnessed devastation and the impending turmoil, compromise at this moment should rather be seen as a show of strength. The post-military coup situation in neighbouring Sudan and the seemingly perpetual humanitarian crises in Somalia have placed enough burden on the Horn of Africa, and therefore adding the Tigray conflict to it is already unbearably devastating on the region’s teeming civilian population.

It is high time elites from all sides of the conflict came to the negotiation tables and reached a compromise for posterity’s sake. The negotiations shouldn’t end at just achieving a ceasefire but rather encompass reconciliations of conflicting historical narratives, mutually beneficial power-sharing formula at the regional and central levels, and settling territorial disputes and grievances fuelling the self-determination crisis.

Olusegun Akinfenwa is a political correspondent for Immigration Advice Service, a law firm based in the UK and operating globally. Most of his work revolves around spreading awareness about the harsh socio-political realities confronting African society, with a view to bringing lasting solutions to them.

The channel we used was the same channel Joy FM used to get ...
24 minutes ago