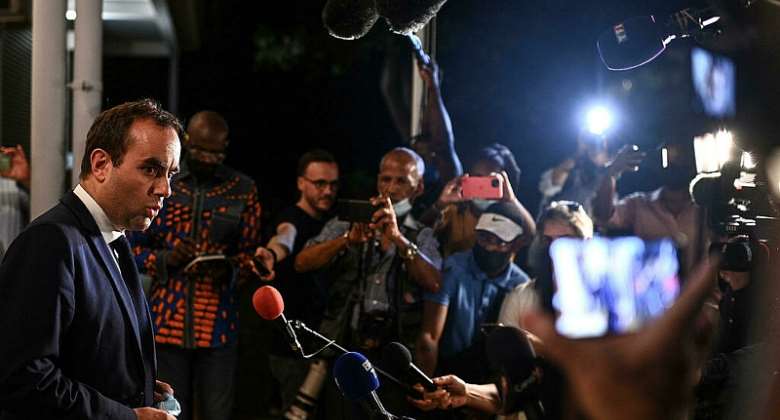 France's minister for overseas territories has arrived in the Caribbean island of Martinique in a bid to end more than a week of violent protests sparked by Covid-19 restrictions and other social grievances.

He made no headway with unions during his short visit to neighbouring Guadeloupe on Monday, and announced the deployment of extra troops to restore calm.

He also failed  to end an impasse in talks that aim to end more than a week of violent protests sparked by Covid-19 restrictions.

Before departing for more talks in neighbouring Martinique, Sebastien Lecornu told reporters that the Guadeloupe negotiations had been deadlocked over the "obvious and indispensable" demand that the various unions condemn the violence.

Discussions were not possible as long as the unions "do not want to condemn assassination attempts" against security forces, he said, referring to live rounds fired during street protests.

During his press conference, Lecornu also announced that a further 70 military police officers and 10 extra special troops would be dispatched immediately to the territory to support the local police force.

They will assist in clearing debris and dismantling barricades set up by protesters over the past week.

Mandatory vaccinations
Unrest in the former colonial outpost began with a protest over compulsory Covid-19 vaccinations for health workers, but quickly ballooned into a broader revolt over living conditions, and spread to Martinique, only 120 kilometres away.

Lecornu has vowed to stand firm on the vaccine obligation for health workers by 31st of December or face suspension without pay.

The vaccine mandate, which was enforced in September on the mainland, has met with greater resistance in Guadeloupe and Martinique, where vaccine hesitancy is high.

Islands under curfew
In the French overseas territories, each of which has close to 400,000 inhabitants, residents complain of greater poverty, higher costs for basic goods and poorer public services than on the mainland.

Lecornu said his talks with four union representatives in Guadeloupe were limited to the receipt of a list of demands.

Maite Hubert-M'Toumo, secretary general of Guadeloupe's main trade union UGTG, said the requests include a suspension of the vaccine mandate for health professionals, no convictions for protesters over the violence, and an improvement in living conditions for Guadeloupean families.

Lecornu, who laid responsibility for some of the issues at the feet of local elected officials, said he expects to make better headway in Martinique where the "republican prerequisite" for negotiations has already been met.

But some elected officials in Guadeloupe chose to boycott a meeting with the minister earlier on Monday.

"We don't really see any effort to calm the situation down," Guy Losbar, former president of the department, said.

However, some union representatives are doubtful of what such a visit can achieve.

"He must be willing to offer concrete measures for our problems. Fly-by courtesy visits are useless," Serge Ariba, a health union leader in Martinique told France 24 television ahead of Lecornu's visit.

The explosion of unrest on the islands has put the fate of overseas territories on the agenda of the campaign heading into 2022 elections, with President Emmanuel Macron's opponents accusing him of neglecting the former colonial outposts.

Ahead of his visit, Lecornu had floated the possibility of giving Guadeloupe, the more troubled of the two territories, more autonomy.

His proposal drew fire from the opposition, with centre-right presidential hopeful Xavier Bertrand accusing the government of being ready to let France "be broken up" and far-right leader Marine Le Pen accusing Lecornu of trying to "buy off" hardline pro-independence groups.

Lecornu's remarks also received a lukewarm response from lawmakers in Guadeloupe, who said the immediate priority was tackling high levels of youth unemployment and other social problems.