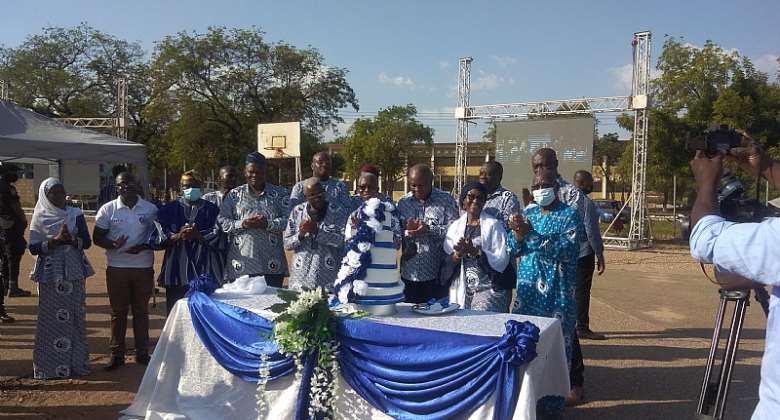 The Minister for Tourism, Arts, and Culture Dr. Awal Mohammed has announced plans to award yearly scholarships to the best-performing students of the Ghana Senior High School (Ghanasco).

Dr. Awal who was speaking at the 60th-anniversary celebration of the school on Saturday, November 27, 2021, said as part of his social responsibility and a way of giving back to his alma mater, students who will emerge best-performing at the end of the West African Secondary School Certificate Examination (WASSCE) every year from the school, will benefit from free tertiary education, to be sponsored by him.

"I am instituting for the next 10 years a scholarship for the overall best-performing students in this school over ten years. I will sponsor the child from here to any university in the country everything inclusive, if I am not there, my kids will continue, we have discussed it," he stated.

The 60th anniversary was under the theme "Ghanasco at 60: Celebrating Our Achievements, Charting Our Future."

The celebration brought together stakeholders including old and present students, teachers, management among others.

Dr. Awal who represented Vice President Alhaji Dr. Mahamudu Bawumia as Special Guest of Honor pledged the support of government to the development of education in Ghana.

He stated that the Ghana SHS has produced lots of people who are satisfying the manpower needs of the country in many different fields.

Dr. Awal promised that a 400,000 dollar ICT facility will be constructed for the school to help improve its infrastructure needs.

He further said an ultra-modern assemble hall would be provided for the school to facilitate student gatherings in the school.

"Beginning the next year 2022, myself and my partners from the US, we are going to build a 400 thousand-dollar ultra-modern ICT facility for Ghanasco, we will do it in 2022. Also, I have discussed with the education minister, we want to start to assemble hall project for the school, in the course of early next year, we will visit the school to start it," he intimated.

Former President of the Republic, H. E John Dramani Mahama in his delivery as Guest Speaker said though Ghana has done a lot in the area of education, a lot more were still lacking.

Mr. Mahama noted that despite the availability of the Free Compulsory Universal Basic Education(FCUBE) and the Free SHS, many youths in Ghana are not able to benefit fully from their education as there are no job opportunities for them to make use of the skills they have acquired.

"While the affordable and quality of education is important, the time has come for leaders and indeed all of us to avert our minds to the challenges of youth unemployment.

"It is not enough for us to trumpet on the successes of the Free Compulsory Universal Basic Education, or the successes of the Free SHS, or some free graduate education because our young people can't fully take advantage of the benefit of universal education if at the end of the massive investment that we make in these graduants, the training is not able to be deployed in any meaningful employment for society," he stated.

The former President called for nonpartisan investment in stem education and TVET to help equip the youth with the required skills and knowledge to position themselves well for employment or setting up their enterprises and employ others.

"We must expand the enrollment of more of our students into Science, Technology, Engineering, and Mathematics than the general humanities. But above all, we must expand investment in skills training of our youth in various vocational and career fields has a way of equipping our young people with the required skills and knowledge to position themselves well to be employed or set up their enterprises and employ others.

"This process must be absolutely none political and government should have no interest in seeking to know the political orientation of the potential benefactors before making them part of any such skill training programs," he added.

Headmistress of the school, Hajia Amina M. Musah in her opening remarks, thanked the members of the old Ghanasco Association (OGA) for their support to the school.

She called on the government to give more emphasis on TVET and STEM education to make the youth well prepared for the future industrial revolution.

Hajia Amina said the performance of the school at WASSCE over the years was very encouraging and pledged the continued support of the staff of the school to further improve the student's performance.

"It is commendable for instance, the reforms in the education sector and the emphasis given to TVET by the government to make more attractive and same commendations goes for government's plans to incorporate Tertiary Education on Science, Technology, Engineering and Mathematics popularly known as STEM. Indeed, we are in an era of a highly interdependent World and the speed with which Technology is evolving coupled with globalization calls for a proactive approach. The STEM approach I am convinced if carefully implemented will he'll to better prepare our youth to become active participants benefiting from the emerging 4th industrial revolution," she stated.