Corruption by Elite With Impunity .... 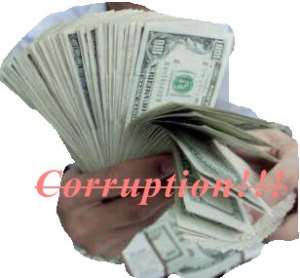 “If the elite continue to steal everything from the public chest with impunity how is Ghana going to move forward?” Above is the question posed by an American friend of Ghana, after reading and discussing a news item on Tsatsu Tsikata, his newly wedded wife (somebody’s ex-wife) and their contact person in Houston, Texas, Mr. Kwasi Sintim-Aboagye. (See: Ghanaweb.com, “Luxury Lifestyle of Tsatsu’s Wife and Pal”; General News of March 8, 2002). Tsatsu Tsikata, the central figure in the story cited above is the former chief executive of Ghana National Petroleum Corporation, GNPC, who was charged with a crime of misappropriating the Corporation’s funds but was exculpated by Ghana’s superior court system on the basis of legal technicalities. Associated with Tsikata’s legal victory is the likelihood that conviction against some public officials who have been found guilty for corruption recently by a “Fast Track Court” arrangement may walk out of jail without serving the sentences imposed on them. For Ghana, a post-colonial African country almost wholly dependent on foreign assistance, foreign aid, foreign investment and foreign everything for survival, the need to fight against corruption has become more imperative today than before. Reducing corruption and upholding the rule of law are among the current demands to be imposed by governments of the developed world in exchange for foreign capital inflow to developing countries, according to documents and matters arising from the UN-sponsored “International Conference on Financing for Development” that ended recently in Monterrey, Mexico. Most sincere Ghanaians, on both sides of political partisanship, know by now that Jerry Rawlings regimes in Ghana were characterized by elite thievery and thuggery.

While in power Rawlings’ appointed officials who engaged in corrupt practices were protected; they walked away with their loot of state assets unscathed. Out of office, it appears the Jerry Rawlings’ appointees and henchmen who used official positions to make use of public assets for their private interest are likely going to be protected by the court system stacked with learned ladies and gentlemen he put on the bench.

In the discussion of Tsatsu Tsikata’s court victories, one significant point manifests itself: Whereas Ghana’s elites may cover up their misdeeds through legal maneuverings, they have to face judgment in the court of public opinion.

To people with integrity and decorum, tarnished personal image by public opinion, relative to upholding the sanctity of family names, is important. However, with Ghana’s national character so much characterized by the culture of corruption, it looks as if a good name is no longer better than riches.

Indeed, as matters stand, it is defensible to state that corruption by Ghana’s elite has become the preferred way of life for people in public positions to conduct themselves to be accepted and appreciated by their families and friends. In other words, the elite in public positions who do not engage in practices that make them wealthy are not as appreciated by friends and relatives as those who do; after all, money is contagious.

Given that Ghanaians are more likely today to be offended by the corruption of the other person and quite accepting of that of a relative or friend, it is germane to ask this question: So, what can be done to have people with integrity to work for Ghana’s needed development; people who care about people and not just themselves; people who possess something called love of country?

Another phenomenon that has emerged out of Tsatsu Tsikata’s case, alongside the others, is that it seems a new model for corruption by the national elite in Ghana has been established since the Rawlings regimes: The elite use political contacts and connections to have access to top public positions, have access and control over state accounts and siphon what they want to offshore compatriots.

It appears the United States has emerged as the preferred safe harbor for the stolen public monies from Ghana. There must be reasons for the choice of USA as the leading country for the Ghanaian elite to stash their stolen loot.

Does anybody remember the case in which Mr. Selormey, Jerry Rawlings’ long term Deputy Minister of Finance, has been found guilty for transferring stolen monies to his friend Prof. Fred Owusu-Boadu in Texas?

When I met and spoke with Prof. Owusu-Boadu at a conference in Washington, DC April, last year, his beef was that the government of Ghana does not spend sufficient money to promote official regulations. In our brief encounter Owusu-Boadu did not tell me he was a business consultant who had received over $1 million to produce a compact disc, CD, for Ghana’s court system. If I knew Owusu-Boadu was a millionaire I would have asked him to pay for my lunch that afternoon; I only munched on my takeaway sandwich because the conference lunch was too expensive for my pocket.

While the discussion here is about the practices of corrupt elite in Ghana, those who use the power of the state to make appointments to top public positions of trust must be held responsible equally.

Individuals who have been convicted recently of corruption and those against whom there have been allegations of corrupt practices in Ghana have tended to attain the public positions they had through political patronage or sheer nepotism and cronyism. In view of the outcomes of the stewardship of those found culpable for corrupt behavior, it is fair to conclude that appointments to top public positions have not been on merit, not on the basis of competency and adroitness, but rather on social and political inside track. I shudder to say that Pres. J. A. Kufuor’s administration appears headed for the slippery slope of providing patronage jobs.

There is no evidence that Tsatsu Tsikata knew a thing about the business of petroleum exploration. It does not take just a law degree to qualify as an expert in petroleum exploration. Often, when square pegs are appointed to fill round holes in public positions, the appointees have no choice but to recruit people who know better than them about the specific job assignments thereby making them liable to manipulation by those with the expertise.

Tsatsu Tsikata whose arrogance as a lawyer matches his capacity to swindle Ghanaians into believing that he had something useful to offer at the helm of GNPC should not shoulder the responsibility for the enterprise he collapsed, in toto.

Tsikata had the chance to sit on top of the largest portion of Ghana’s liquid assets over a long period precisely because he was appointed to head the GNPC by Jerry Rawlings. It is defensible to assume that Tsatsu Tsikata was elevated from his teaching job at the University of Ghana to head the GNPC because of the position of his uncle Capt. Kojo Tsikata who had been the power behind Jerry Rawlings’ throne since the AFRC days.

Once at the helm of GNPC Tsatsu Tsikata had access to the coffers of the Bank of Ghana (the central bank) obviously with the total connivance of Jerry Rawlings and Prof. Agama, then-governor of the Bank. Does anybody know why Kwasi Botwe resigned as Jerry Rawlings’ Minister of Finance for several years? Why has Agama remained silent since leaving his post as governor of Bank of Ghana?

One of the baffling aspects of the looting of Ghana’s public coffers through the GNPC is the eventual participation of Quincy Kwasi Sintim-Aboagye, a man of humble family background from Asamankese in Ghana’s Eastern Region, described as Tsatsu Tsikata’s “pal” and “personal aid” in Houston, Texas.

When Sintim-Aboagye arrived in the United States as a dropout from Ghana’s Kwame Nkrumah University of Science and Technology, KNUST, his mantra was to lament over poverty in Ghana and the lack of adequate educational resources in the country.

In fairness, when Sintim-Aboagye left Ghana he was running away from poverty and chasing after greener pastures in the United States, the hub of world capitalism. Under the U.S. economic system, individuals are encouraged to accumulate wealth. Thus, given the press description of how Mr. Sintim-Aboagye flaunts wealth about in Houston, it appears he has been successful in fulfilling his American dream.

What cannot be seen as being fair is if Kwasi Sintim-Aboagye has become associated with Ghana’s elites who have no shame in stealing from the majority poor of the country.

Should the opportunity arise for me to meet Kwasi Sintim-Aboagye once again, I will urge him to explain to me how he expects Ghana to solve the problem of poverty he ran away from when he colludes with an individual of Tsatsu Tsikata’s ilk to milk Ghana of assets earned at the back of the poor cocoa farmers of Asamankese. This should be a fair question for discussion, according to my thinking.

On the popular discussion forum on Ghanaweb.com, a discussant challenged apologists for Jerry Rawlings to name any of his public appointees who was independently wealthy before jumping on his political bandwagon. The forumer who calls himself “Denise the Kinder One”, asked, “What was the worth of Ahwoi, Kojo Tsikata, Tsatsu Tsikata, Kofi Awoonor, Kpodorgue, Portuphey, Agbodu, Obed Asamoah, Totobi Kwakye, Hudu Yahaya, Goosie Tannoh, Asise ‘Nikanika’ etc? Most of these people were nothing but paupers, they had nothing they could call their own. But, what do we see now? They have all become wealthy overnight, all through the officially sanctioned stealing which permeated throughout the twenty years of Rawlings uncalled for interference in our constitutional dispensation.”

“Denise the Kinder One” has made his point, except that he forgot to include some other names that were popular in the Ghanaian press in the ‘corruption with impunity’ column during Jerry Rawlings’ rule. Stay tuned!

While in parliamentary opposition, Hon. J. H. Mensah, currently a Senior Minister, who describes himself as the “Senior Prefect” of Ghanaian economists, had the chance to stop Tsatsu Tsikata from doing further damage. Mr. Mensah chaired a parliamentary committee that investigated Tsikata’s investment initiatives from GNPC and gave him a clean bill indicting that returns were to be expected. Is J. H. Mensah in a position, today, to back-up the findings of the Committee on GNPC he chaired? While talking about corruption, technically an act of malfeasance by public officials, it is important to point out the significant role played by individuals in the private sector who often are accomplices of the primary culprits. A case in point is the “ghost names” syndrome whereby government checks are written out in favor of non-existing employees. Sources in Ghana indicate that the “ghost name” checks are cashed at a discount, by businesspeople in the private sector! So, is Ghana going or coming?