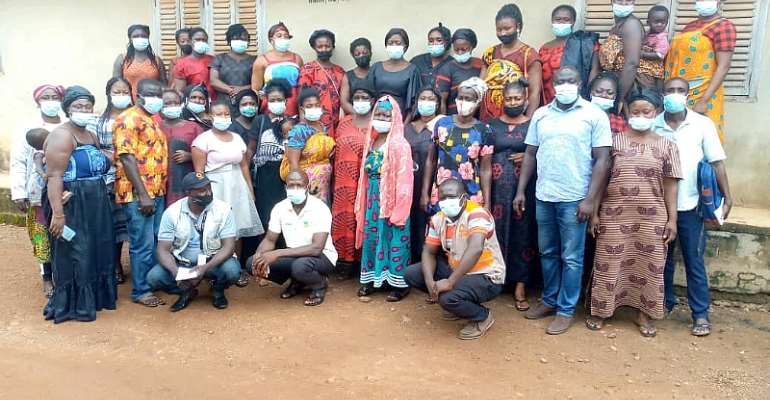 Care International in Ghana has heaped praises on Wacam for its good works aimed at empowering and helping to improve the lot of people in mining communities across the country.

The Project Coordinator of CARE International in charge of the Yensore Programme, Zakaria Yakubu, made the commendation on Tuesday, August 10, 2021 during his outfit’s monitoring visit to Kenyasi, a mining community in the Asutsifi North District in the Ahafo Region.

The visit formed part of a five-day monitoring exercise (from 9th - 14th of August 2021) in mining communities in Ahafo and Tarwkwa in the Western Region.

It afforded the CARE International team led by Mr Yakubu together with a Monitoring and Evaluation (M&E) Officer, Mr Alexander Buunaaim, the chance to also know in the Ahafo Region the various Wacam groups, and how they were benefitting from supports being offered to them.

Addressing members of Wacam women group, Village Savings and Loans Association (VSLA), in Kenyasi after being educated on their operations on Tuesday, the CARE International project coordinator contended that he was very happy with the way VSLA was going about their activities.

He was also delighted to learn from the women that soaps donated by CARE International through Wacam reached them.

According to him, CARE International has a long working relationship with Wacam, stressing that the VSLA was a good initiative.

Mr Yakubu said even though his organisation works with other partners on different projects across the country, they take keen interest in working with women especially.

“One thing we like about Wacam is their working with community groups to help improve their standard of living,” said Mr Zakaria.

CARE International, Mr Yakubu says he believes strongly the need to address gender issues in the country which can bring about development. “…and Wacam is doing exactly that,” he noted.

Again, he commended other organisations which were also into community empowerment.

“We like it when other organisations are also supporting to empower communities across the country,” he said.

Mr Yakubu used the opportunity to remind the women to keep adhering to the Covid-19 safety protocols, cautioning that the virus was still lurking in the country.

He donated some boxes of nose masks and bottles of alcohol-based hand sanitisers to the women and urged them to use them properly.

Members of VSLA expressed their gratitude to Wacam and CARE International for their continuous support towards improving their wellbeing.

Some of them disclosed that through the VSLA, they have been able to save and access loan facilities to send their children to universities and senior high schools. Others also said the VSLA has helped them expand their businesses.

The team later visited Dormaa Kantinka residents at Kenyasi No. 1 where some of them recounted very harrowing experiences they suffered at the hands of Newmont prior to their resettlement.