A/R: KATH runs out of bed for patients, admission ward filled to capacity 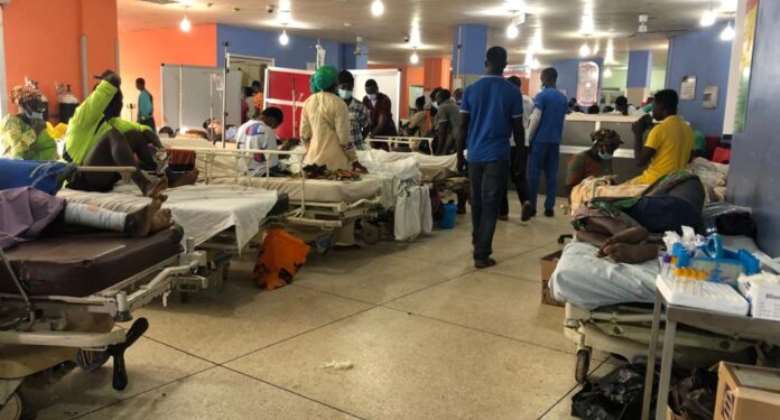 The sick risk being turned away when they visit the Komfo Anokye Teaching Hospital in Kumasi with the admission ward at the facility currently filled to its capacity.

The health care facility in the Ashanti Region is one of the topmost in the Region and attends to hundreds of sick people on a daily basis.

Unfortunately, the hospital may not be able to accommodate patients referred from other districts to the facility for medical care from today onward.

This is because the admission ward is full with some people already being attended to on the corridors of the facility.

As a result of the unavailability of beds, the Hospital is also compelled to treat some of the patients in wheelchairs.

Speaking in an interview with Starr News, a nurse in charge of the Orange Ward at the Hospital, Irene Owusu indicated that KATH is in serious need of beds.

“We are in dire need of beds. Because there are a lot of people sitting there, because of lack of beds we can't even admit those who are sitting on chairs.”

“Like now, we have about three patients who are unknown and they’ve occupied the beds for a long time. But if the beds are there those who are sick will be able to occupy those beds,” she said.

She continued, “another problem is we have a lot of people at the main wards who have been discharged but are not able to pay their bills, so they are still there and they are occupying the beds.

“So, I think it’s one of those things that is escalating to lack of beds.”

Nurse Irene Owusu further expressed worry over the situation as she stressed that treating people while sitting in wheelchairs and other inconvenient places could worsen their situations.

“It’s not today only, every week we have that problem. It’s something that is happening here,” she concluded.

Reports suggesting we have accused police of 'hiding' interc...
39 minutes ago