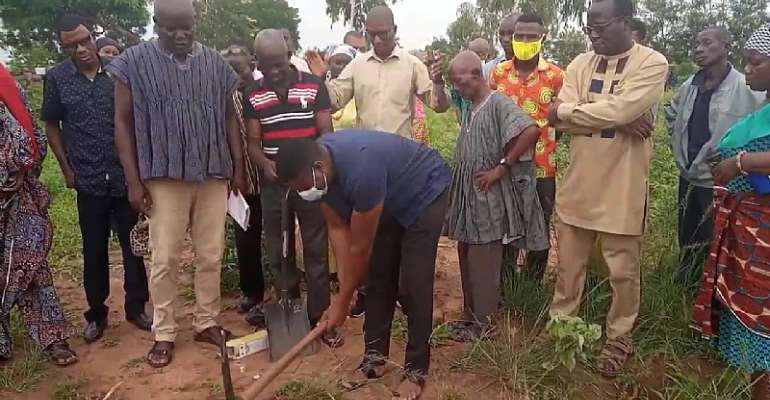 The 1994 year group of Sogakope Senior High School has finally begun implementing their social intervention program, thanks to pictures of the deplorable state of the Agave-Avergome D/A Basic School on social media.

On Tuesday, 29th June 2021, a team led by Mr. Duncan Titiati break ground for the construction of a 6-unit classroom block for the basic school.

The project is expected to be completed by June next year, which according to the contractor will depend on the availability of funds and building materials.

Mr. Kennedy Ametorglo, the contractor said if these things are made available, the project would even be completed in less than a year.

Funds for the classroom block are however not a problem.

Mr. Duncan Titiati has assured the school authorities that funds would be made available for the construction of the classroom block. He said the only thing they expect from the school community is their support through communal labour.

In a brief interview, Mr. Duncan Titiati called on masons, carpenters, and artisans to support the project.

‘We are going to provide funds for the project, and all we want is labour. Masons, carpenters, and artisans should help us,’ he said.

Labour is also not a problem as some individuals have already assured us of their support.

The Agave-Avergome Basic School has for the past years resorted to soliciting funds to address their challenges. Mr. Emmanuel M. K Vadze, the school management committee chairman who first thought of this idea said he is grateful to SOSA ’94 year group for their intervention.

He added that the school has other needs which also needs to be addressed. He said they need a Junior High School block, a teachers’ bungalow, and a good road network.