The Mosque That Opened The Moss Of Ghana's Projects Cost 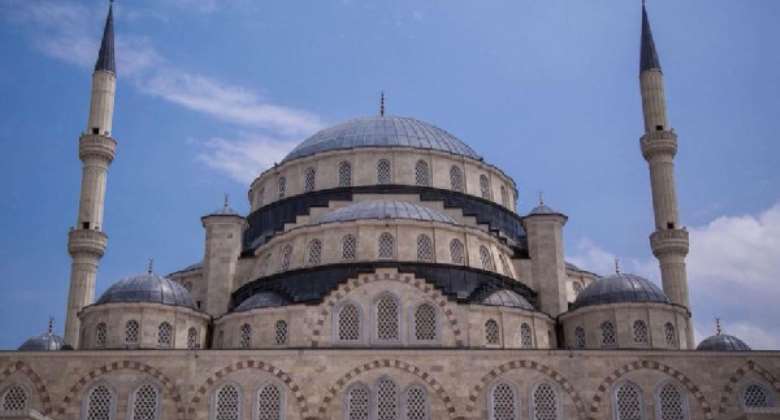 I sincerely believe that every Muslim and indeed every Ghanaian was very excited to know that the long-awaited day finally arrived when the Kanda National Mosque was eventually commissioned by His Excellency, President Nana Akufo-Addo and opened to the general public.

People in and around Accra have testified how the “luminating” environment of the biggest mosque in West Africa of its kind located in Ghana present a sparkling beauty in religiosity ever witnessed anywhere in the country. I understand the monumental project sits on a 40 acre land and comes with ancillary services such as a research center, a library, a secondary school, a clinic with laboratory, a pharmacy, a morgue, an office space and a befitting residence for the national chief Imam.

The 15,000 capacity mosque at Kanda is a replica of the blue mosque in Istanbul, Turkey. The sterling elegance of beauty and a masterpiece of the arts and civilization of the Ottoman empire brought to Ghana present an architecture wonder sitting right in the heart of Accra. The interior decor alone is a luxury worth celebrating the pride of the Islamic faith and tradition. Glory be to ALLAH for this blessing in Ghana.

All these magnificent descriptions of this project came at a cost of 10,000,000 dollars (ten million dollars). A multi-sourced finance project hugely supported by the Turkish government. I must admit that when I first read that this whole project cost 10 million dollars, I had some nostalgic feelings in that regard. On one hand, it was about the edifice and on the other side, it was about the cost.

I was happy in the sense that Ghana has been lucky and blessed to have this project sitting in our country. It could have been located in a different country with a larger Muslim population. My excitement also spurred from the fact that a project like this kind is an honour done to the national chief Imam who has been a great leader and an inspiration to the Islamic community in Ghana. On the other side, I was apprehensive with the cost relative to what we are slapped with in this country.

I asked myself that if this beautiful project with all these many parts could cost 10 million dollars, then it provides us with a prima facie evidence that our politicians have robbed us and continue to rob us seriously. Just reflect and count the many two or three storey building projects put up as classroom blocks that relatively cost much higher than it should have cost us. Again, look at the various district hospitals that do not come close to the luxury and mega size at Kanda, yet, such projects always cost us more if you did the cost analysis.

I have always wondered why a simple village community basic school of six classroom units should cost us between Gh￠800,000 to 1 million plus to put up. Sometimes these facilities even come without a toilet facility. The cost-benefit analysis of other government projects isn’t any better to say the lest. You remember MTN put up a six units classroom block with a bungalow facility at a cost of GH￠ 200, 000 at a time the Mahama government was putting up similar facility without a bungalow at a cost of GH￠500,000. Nana Akufo-Addo’s government builds six unit classroom block at a cost between GH￠ 800,000 to 1 million when Airtel built similar facility at a cost of GH￠300,000 with furniture fitted in the classrooms.

I have come to understand that politicians (both sides) know that this country doesn’t have any future to thrive so the surest way to safeguard their sustenance is to milk this poor country and build themselves and their families. Ghana is sick and continue to suffer from this rob and rake attitude of these politicians. It will take you and I to correct these wrongs. The first solution to this problem is to depoliticise our thinking and put Ghana first.

More from Feature Article
ModernGhana Links
What Legacy Are You Leaving Behind For Your Children And Your Society?
A quick note to the astute and affable founder of Grandma International, Valarie Wood-Gaiger OBE
All those participating in the ongoing brutal gang-rape of Mother Ghana must beware
TOP STORIES