The murky link between DR Congo's ADF and Islamic State 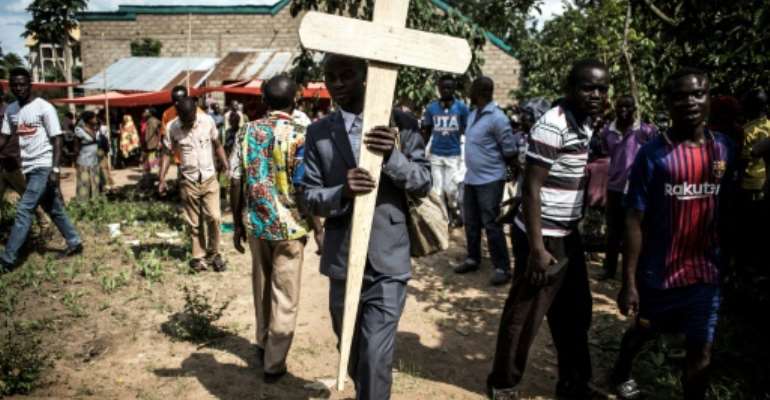 Grief: A relative of a woman killed in a suspected ADF attack in Beni carries a cross to her grave. By John WESSELS (AFP)

Its hallmark: Attack a remote village, massacre its inhabitants and abduct survivors.

Not for nothing has the Allied Democratic Forces (ADF) become a name that inspires widespread dread in eastern DR Congo.

Suspicions are growing that this historically Ugandan Muslim group has linked up with the so-called Islamic State, also called ISIS, although experts say the depth of the involvement remains unclear.

According to the Kivu Security Tracker (KST), a respected monitor, the ADF is one of an estimated 122 armed organisations that roam eastern DRC -- the legacy of two regional wars that ran almost back-to-back from 1996 to 2003 and claimed millions of lives.

Troops patrol the village of Mwenda, which recently came under attack by the ADF. By ALEXIS HUGUET (AFP)

The DRC's Catholic church says the ADF is suspected of killing 6,000 people since 2013, while the KST blames it for more than 1,200 deaths in North Kivu province's Beni area since 2017.

On the weekend of June 27-28, Beni was hit by three bomb attacks, including a blast at a Catholic church, that came just hours after a suicide bombing outside a bar -- the region's first such attack.

The IS, monitored by the US-based SITE intelligence Group, identified the suicide bomber as "Abu Khadijah" who targeted "Christian disbelievers at a liquor bar."

On March 10, the US State Department branded the ADF a "foreign terrorist organisation" known as "ISIS-DRC" or "Madina at Tauheed Wau Mujahedeen."

It said the group was led by Seka Musa Baluku and had become IS's so-called "Central Africa Province" -- an entity that the IS declared in April 2019 as it was losing ground in Syria and Iraq.

The IS is also affiliated to jihadist groups in the Sahel and northern Mozambique -- two other poor, remote African regions with struggling governments.

In a report dated June 10, the UN experts said Baluku pledged allegiance to the IS in July 2019.

He deepened the commitment last September, declaring that the ADF no longer existed and was part of the "Central Africa Province" operation.

According to the Bridgeway Foundation, a US NGO that works on preventing mass atrocities, Baluku turned to the IS in 2017 when the ADF ran short of money.

The cash crunch weakened morale and virtually ended its operations.

An injection of IS funds and propaganda boosted recruitment and encouraged the group to take bolder operations, helped by an influx of motivated foreign jihadists, says the foundation's Laren Poole.

However the UN experts are cautious about the extent of the IS-ADF association.

They say they are unable to confirm any "direct" IS role in either commanding ADF operations or in providing it with financial, human or material support.

The ADF has been under US sanctions since 2014 -- the designation of the ADF as a "terrorist organisation" provides additional legal tools for US law enforcers to prosecute members of the group.

Casualty: A young man who was shot in the arm in an attack on his village north of Beni. By ALEXIS HUGUET (AFP)

Jason Stearns of the Congo Research Group, an organisation based at New York University, suggests the announcement was "probably political, making the ADF part of the American war on terror."

But the designation carries several risks, not least the propaganda boost for the IS, Stearns warns.

Another peril is that the ADF becomes simplified to a military problem, thus enabling DR Congo President Felix Tshisekedi to sidestep more complex options, such as a programme to demobilise militia fighters.

"Two years after his inauguration, his government has not been able to articulate a strategy for dealing with armed conflict," Stearns wrote in a blog.

"It is difficult to see a solution to the conflict around Beni, or indeed to the violence in the DRC in general, without a transformation of the Congolese state," he added.

Our members are dying, pay us – Contractors lament
30 minutes ago