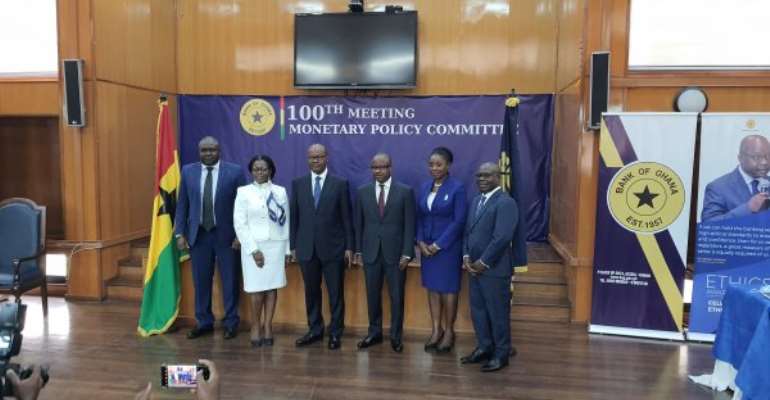 The Monetary Policy Committee (MPC) has cut its benchmark rate by 100 basis points to 13.5 per cent from 14.5.

MPC cited signs of economic recovery and the easing of inflation pressures for the cut.

This is the first reduction since November 2019, according to the bank of Ghana published data.

Addressing the 100 MPC press conference in Accra on Monday, Dr Ernest Addison, the Governor of the Bank of Ghana, said a rebound in economic activity and easing of inflation pressures informed the decision of the Committee.

Headline inflation dropped sharply from 10.3 per cent in March 2021 to 8.5 per cent in April, almost back to pre-pandemic levels and within the medium-term target band of 8±2 per cent, driven mainly by lower food prices and base drift effects, a tight monetary policy stance and stable exchange rate conditions.

“Risks to the inflation outlook appear muted in the near-term, but pressures from mostly rents and transport fares, would require some monitoring to anchor inflation expectations,” he said.

“On the domestic front, economic activities have picked up strongly, evidenced by the high-frequency economic indicators,” he said.

Dr Addison said although consumer and business confidence had softened, triggered by the new revenue measures and recent instability in power supply, but are viewed as temporary and should improve in the near term.

"The cut in the policy rate reflects the confidence of the Committee that the recent increases in fuel prices and taxes will not necessarily lead to increases in the rate of inflation," Dr Addison, said.

Dr Addison said the COVID–19 policy and regulatory response measures had helped to mute the effect of the pandemic on corporates and households and are being maintained in the near term.

He said there were signs that the execution of the budget for the first four months point to some improved revenue collections and expenditure containment to ensure real re-alignment to the consolidation path.

“The fiscal data shows that fiscal revenues have significantly outpaced developments a year ago but slightly lags behind target,” he said, adding that the gap in revenue performance vis-a-vis the budgeted target has been compensated for by expenditure containment measures.

However, he said, in the near-term the Committee noted risks in the fiscal outlook surrounding wage settlements, energy IPP payments, the potential for arrears build-up, potential for scaled-up expenditures associated with COVID-19 waves and mass vaccination efforts, and the implementation of the Ghana CARES programme.

These he said would have to be carefully managed in a time consistent manner to minimize any deviation from the path of fiscal consolidation.

On growth outlook, he said, the Committee's view was that projected growth in the extractive industries, steady rollout of the vaccination programme and recovery in industry and the services sectors should work their way in supporting a faster closure of the output gap in the medium-term.

The Governor said the provisional data on budget execution for the first quarter of 2021 indicated an overall broad cash budget deficit of 2.6 percent of GDP against the target of 2.5 percent of GDP.

Gross International Reserves stood at US$10,990.3 million at the end of April 2021, providing cover for 5.1 months of imports of goods and services.

The reserve level compares with a stock position of US$8,624.4 million, equivalent to 4.1 months of import cover recorded at the end of December 2020.

Cumulatively, the Ghana Cedi appreciated by 0.5 per cent against the US dollar in the year to April 2021, compared with a depreciation of 1.2 per cent in the same period of 2020.

Commenting on the rate cut, Mr Collins Appiah, Financial Economist with Services Integrity Savings and Loans, said, “Looking at the economic fundamentals like the Inflation rate which dropped from 10.3 per cent in March to 8.5 per cent in April 2021, a relatively stabilised, exchange rate, a consistent drop in governments T'Bills rate and the need to support the private sector through economic growth, it is not surprising for Bank of Ghana to cut the policy rate.”