Thirty years after his death, Serge Gainsbourg’s house to open as a museum 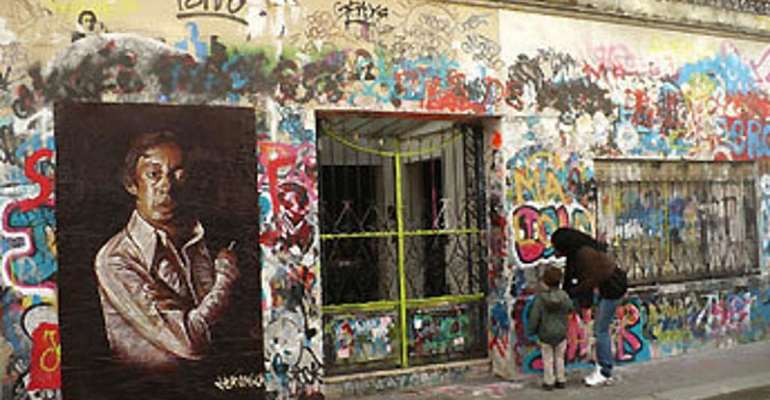 Number 5 bis rue de Verneuil, where iconic French singer and songwriter Serge Gainsbourg lived for more than 20 years until the end of his life, has remained virtually untouched since he died suddenly from a heart attack on March 2nd 1991.

His daughter, actress Charlotte Gainsbourg, was only 19 at the time and has since often spoken of her difficulty in dealing with the death of her turbulent, alcoholic father who was also the ultimate French 1960s icon.

She bought the building in the 7e arrondissement soon after his death and has preserved it with care ever since.

Charlotte is now ready to open it as a museum. She had hoped it would be ready in time for the 30th anniversary of his death but the Covid pandemic has delayed work on the project and it is now scheduled to open in October.

She told AFP news agency that the museum will give visitors a feel of the environment where Gainsbourg produced his work, and she hopes it will become part of the “heritage” of Paris.

Black walls, drunken rows
Visitors will be able to see the large living room, with its piano and art deco bar and the composer's significant collection of sculptures.

“I don't know what it is: a sitting room, a music room, a brothel, a museum,” Gainsbourg would apparently tell guests who came to visit.

The interior of the house, with its black walls and rooms stuffed with memories, can be seen in numerous photos of the time.

Charlotte lived there with her parents for much of her childhood, amid parties and drunken rows until Serge Gainsbourg and Jane Birkin, one of the most famous couples in France, eventually separated in 1980. Serge remained in the house while Charlotte lived mostly with Jane but continued to spend time at the house in rue de Verneuil.

She says the house had few objects while Jane was there but that after she left, Gainsbourg accumulated more and more until it began to look like a museum “even while he was alive”.

One of Charlotte's favourite objects is a bronze casting of Jane Birkin's body.

The rooms have remained untouched since Gainsbourg died, with even his cigarette butts still in the ashtray according to Jane Birkin.

“Nothing has been moved since the day he died. Everything is still in its place, it's as though he had just gone to sleep. Charlotte has been looking after everything, the heating [and everything else] she is extraordinary, she has preserved everything like in The Sleeping Beauty.” she told the French media outlet Jack recently.

Letting go
Charlotte planned to create a museum when she bought the house but the project became bogged down in obstacles. Then she became unsure of the idea and decided she would rather just hold on to the house and its memories. 'It was sort of what I had left of him”, she told AFP.

She decided to go ahead again with the museum while living in New York, from where she has just returned to Paris after a period of six years.

She said her decision was “for other people but also for my mental health – I needed to detach myself from him.”

The building on Rue de Verneuil is unmissable. Fans have covered the walls in mural portraits, tributes, lyrics and messages to the songwriter.

Over the years, amid complaints from residents of the street, the fans' work has been scrubbed off – only for the walls to be covered again within weeks. Now the spot is a tourist attraction.

Sensitivity, provocation
Reflecting on the influence her father has had on subsequent generations of musicians, she wonders now how he would have fared in today's world. “Would he have been banned from our screens?

“He had so many facets, he expressed his dark side. He had no secrets," she says.

“He was such a rich personality, whose great sensitivity coexisted with a great sense of provocation. You never see that today."