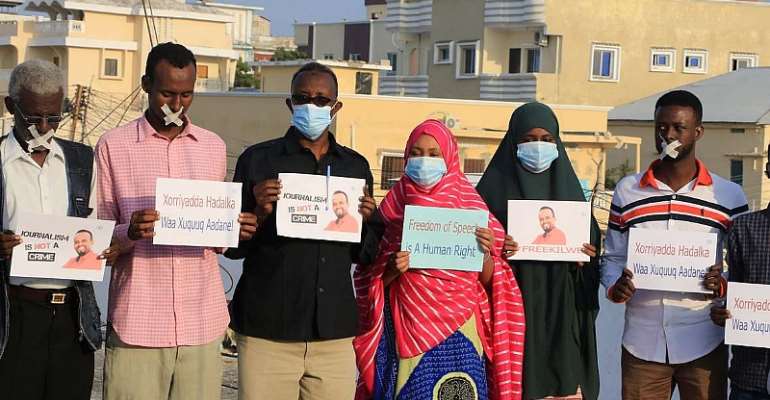 Members of the media community protested against the prolonged detention of freelance journalist Kilwe. Photo: SJS

On the evening of 27 December 2020, officers from PISA (Puntland Intelligence and Security Agency) in Garowe, the capital of Puntland State, detained journalist Kilwe, who reports for Kilwe Media Inc , a Facebook news page he co-founded. The arrest came a day after anti-inflation protest hit Garowe town, which Kilwe covered. Mr Kilwe’s broadcast of the protests were shared widely and it is believe that this is why he was seized. He was held at undisclosed PISA detention without the access of family and lawyers in contravention of Article 27 of Puntland’s Constitution which provides that an accused person shall not be detained in a facility that is not legally recognized and that the accused be brought before a court of law within 48 hours.

On Monday 11 January 2021, without the knowledge of his family and without the presence of lawyers, Kilwe was transferred to Garowe central prison and was reportedly charged with “attempted murder” by the Puntland military court. Family members said they did not see the charge sheet but that the charges were only read to them by a military court official. Further, no information as to who Kilwe was alleged to have attempted to murder was provided and it is understood that no evidence exists.

According to defense lawyer Avv. Mustafe Mohamed Jama, Kilwe appeared before the military court on Tuesday morning 2 February 2020, but the Prosecution was not able to provide enough evidence in regards to the charges pressed against the journalist for the court to accept the case. The lawyer also wrote the military court questioning the court’s jurisdiction over Kilwe case.

Barrister Michael Polak from Church Court Chambers and Justice Abroad who is working as a team with Mr Jama and the Somali Journalists Syndicate has submitted applications to the United Nations’ Working Group on Arbitrary Detention, UN Working Group on Enforced and Involuntary Disappearances, the UN Special Rapporteurs on Freedom of Opinion and Expression, and the UN Special Rapporteur on Torture. The legal team has also reached out to Somalia’s international partners to raise Kilwe’s plight.

On 1 February 2021, Kilwe was nominated among the 10 Most Urgent Press Freedom cases for February 2021 by the One Free Press Coalition, which is an international coalition of media houses and organizations that stand up for journalists under attack for pursuing the truth worldwide.

“Curtailing press freedom through intimidation and false charges is alarming and is against both Federal and Puntland constitutions which guarantee the freedom of the press. We call for the Puntland authorities to immediately and unconditionally release Kilwe and allow him to freely exercise his journalistic duties without fear or reprisals.”

“It is frightening that someone like Kilwe can be disappeared for 16 days simply for reporting the news. This is in breach of Puntland’s legal provisions as well as the obligations of Somalia under international law. It is imperative that the Puntland Authorities heed the call to release Kilwe so he can return to his wife and children. “