2020 elections debased Ghana's credentials as beacon of democracy in Africa 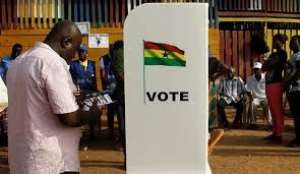 As a country that is made much of as a beacon of democracy in Africa, Ghana has held eight successive elections in a row under the fourth Republican dispensation from 1992 to 2016.

We again went to the polls on December 7,2020, hoping to successfully elect a president and members of the 9th parliament.

Many,including the Jean Mensah led electoral commission christens this year's just ended polls as very peaceful,free,fair and most transparent in the history of the fourth Republic.

To emphasize,they say it's the best ever organized polls under the current political dispensation.

Indeed, that could well be said....After all,a disputed president and at least, Members of Parliament have been pronounced as elected amidst the political firestorm.

But the mere ability to eloquently announce a president whose legitimacy is currently being contested and some MPs at the end of a keenly contested polls is not enough to describe this year's election as the best ever since 1992?

It's well to however state that events that unfolded after the voting leading to the counting and the collation of the results where the EC was directly involved make it practically impossible and disingenuous for anyone to describe this year's polls as anywhere near the tenets of a good democracy.

It would be a betrayal of conscience if in the midst of the brute force meted on innocent citizens by bearded police and armed military personnel,you glorify the electoral commission for holding one of the most successful elections under the fourth Republic.It is unheard of to say the least!

In the full glare of the cameras,armed military men were seen gunning down unarmed innocent civilians who sought to make their vote count.

Unfortunaly,the media and the international community including,religious bodies just went silent as these brazen attrocities were unleashed on innocent citizens with impunity.

Techiman South,Ablekuma Central,Awutu Senya East,Savelugu and Odododiodoo are glaring examples of constituencies where lives of some five innocent citizens had to be taken away by those decorated irresponsible security men in uniform.It is clear this apology of harum scarum police and military men are not going to answer for soiling their hands with the blood of innocent citizens.But I can bet them,no sin will go unpunished on the face of this earth.The day of reckoning is coming and every man would pay dearly for his/her sins.

Why must the ambition of a single man be worth the blood of some five citizens?Shame on you!My condolence to the bereaved families.

(God is in control).

Shamefully,both the president and the EC largely turned blind eyes to these unfortunate occurrences and failed to condemn same in their individual speeches.

They got the power through whatever means,so lives don't matter.Right?

The leadership of the Ghana Armed Forces and the Ghana Police Service must bow their heads in dishonor and shame. You have allowed some unscrupulous and machiavellian characters to debase the police and military uniform.We grew up learning that a military man only shoots when his/her life is in danger,not when innocent civilians are peacefully demanding a protection of their mandate.

The regime seem like a hellacious and a fearful storm to you.Your allegiance is to the regime and not the state.But the all merciful God is watching all of us.

Your sins would catch up with you soon.

It is important to point out that,the Coalition of Domestic Observers (CODEO) recorded 235 cases of various incidents from all the 4,400 polling stations where it deployed observers.

It said the top five of these reported incidents are intimidation/harassment, violation of COVID-19 health and safety protocols, violence of various kinds, unauthorised persons at polling stations and malfunctioning of biometric devices”.

The Ghana Police Service reported 21 cases of electoral violence consisting of six gunshots related incidents and five deaths.So which other "most peaceful" are the experts and the EC ascribing the just ended elections to?

Let me also say and categorically so,that the just ended polls cannot be described as most credible, transparent,free and fair when the Electoral Commission hurriedly announced wrong figures to the nation and failed to address the genuine concerns of all parties involved prior to the declaration.It later came to admit to its own computational errors, clearly putting the credibility of the EC on the line.

Agreed,we are all humans,but this all important escapable error in this era of numerous statistical software is unacceptable.

In announcing the results,the electoral commissioner indicated that the results so announced excluded that of Techiman South,since in her own estimation the results of the said constituency would not affect the outcome of the polls.How weird this sort of explanation can be?

Jean Mensah has insulted the legitimate will of the people of Techiman South.It is implied that there was no need for them to register as Ghanaians and queue in the hot sun to vote.In a democracy,every vote must count and every vote represents the wishes and aspirations of people no matter the statistical significance.

Mind you,we are not just counting votes,but we are counting the future of this country manifest in our collective decision.

This is basic;even a single vote can change the percentage tally and by large the future of this nation,not to talk of votes in sum of 128,018.Jean Mensah needs to seriously go back and revise her basic mathematics.She got it totally wrong.

I dare say,we can never be proud of this kind democracy where unprofessional millitary personnel are deployed to intimidate civilians.

Just imagine what is happening to the Keta MP-elect.But for timely intervention,he would have been guned down.

The country is not secured and the regime ought to wake up and be responsible enough for the lives of the ordinary citizen.

Truth be told,the just ended elections would go down the history of this country as the worst ever.And I can tell you,the many infractions has debased the credentials of this peaceful country of ours as a beacon of democracy in Africa.

We need to be forward looking in picking the fallouts in this error ridden 2020 polls to build this democracy strong once again!

All in all,peace must prevail.I explore the two leading candidates to think Ghana first.

In fighting for what they think is their legitimate count of votes,they must put the nation first.

Bullets in their nature have no clear direction and no ambition is worth more than the blood of any citizen.