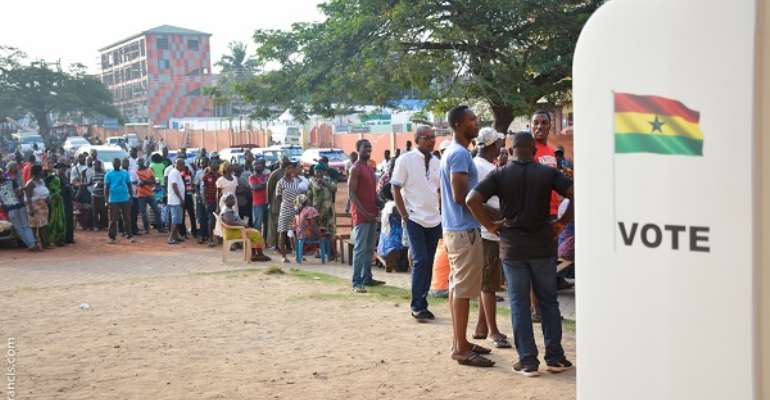 News about electoral violence brings shivers down and up the spine of the common citizens.

“Say No to Electoral Violence” is the common campaign that is launched every electioneering year against the chaos of elections. If politico-electoral violence has not taught us anything in our own country, Ghana, the electoral crisis in Angola in 1992, Ethiopia in 2005, 2017/2018 election in Kenya, Cote d'Ivoire in 2010, Sierra Leone, Burundi, amongst other African countries have taught us that women, children, the disabled and all other persons are not at the mercy of the barrels of the gun or the edge of the cutlass.

There is no doubt that I fear for my life. But, come to think of it, I won’t start violence, but what if someone’s actions lead us to such a terrific point in our national electoral, political and social history?

Technology has been a great tool that has been leveraged by individuals, both public and private institutions, and in every aspect of our national life in Ghana. For the sake of that fact, the Electoral Commission's desire to digitize the electoral processes in Ghana was with less discontent.

Formerly when the manual system has been largely employed in the electoral processes, Ghana has had five successful elections between the periods of 1992 to 2008.

In 2012 when the Commission adopted the use of technology in the electoral process, the catch-phrase “No Verification, No Vote” ended the country into mumbo-jumbo of emotions because the results of even a technology-assisted election ended in the Supreme Court for eight months on the issues of irregularities, electoral malpractices, among other charges against the EC and the winning party, the National Democratic Congress (NDC).

For over decades, western countries have adopted and developed sophisticated technologies into their electoral processes. While most of these western countries such as the USA, Germany, and others are at risk of foreign infiltration in their technology-inclined electoral processes, their challenge is how to churn out results of a free, fair, and transparent election.

According to a research conducted by Pew Research Center, it was revealed that 75 per cent of Americans who participated in the survey anticipate the likelihood of Russia and other foreign infiltration in the US 2020 Elections. This follows after the issue of America’s 2016 election infiltration by Russia. Till date, this is a scare to Americans in the run towards their 2020 elections on 7th November.

So, if in Western countries where these technologies are invented are employed with great caution, what then should third-party users as Ghana expect?

Within the past few days, the Ghanaian media have been triggered by news of the automatic deletion and duplication of names from certain electoral constituencies and other irregularities associated with the exhibition of the voter's register which was compiled using technological means. These deleted names, as news have it, is occurring in the strongholds of some political parties and not others.

Whichever may shoulder the blame, there is an Electoral Commission in the equation which has been granted power by the citizens through Articles 45(c) of the 1992 Constitution of Ghana “to conduct and supervise all public elections and referenda”. This means that should there be any anomaly with the electoral processes of the country, the electoral commission shouldn’t miss being the first respondent as the Election petition of 2012 in Ghana taught us.

In spite of that, the maintenance of the peace of this country is the responsibility of every citizen. As the National anthem expressly and explicitly says “…bold to defend forever the cause of freedom and of right”. With particular stress on the word “right”, the Electoral Commission must ensure that the right things are done to protect the fundamental human rights of the citizens which may be under threat in the case of any electoral malpractices or anomaly.

As all political parties endorse the saying that “We will not accept the result of a flawed election” it is a clarion call on the Electoral Commission to do all it can to ensure the protection of the peace of this country by ensuring a free, fair, and transparent election and, this includes all the processes before, during, and after the election.

On that basis, it is strongly suggested to the Commission to ensure that the application of technological means in the electoral process in this 2020 elections should not be done blindly of its possible challenges.

In the same vein, the EC should ensure that there is not an over-reliance on technology especially in this very election where there are too much at stake. If for nothing, the political history of Ghana, Africa and the world has taught us the dire consequences of conservativism in elections.

Therefore, aside from the use of technological means in this election, provisions should be made for manual backups during every process of this election from the beginning of the polls, during the polls and after the results are declared.

The Electoral Commission should also do well to address issues raised by all parties involved in this election in a fair manner, rather than provide responses for the anomalies identified by the parties involved. Organizing meetings to offer explanations to the challenges may not necessarily resolve the identified issues unless pragmatic steps are taken to address the issues on the ground, and not engage in mere rhetoric with things that could threaten the peace of this country.

The EC must know that the 2020 election is not being organized for the Commission but for Ghanaians and that the EC is just a stakeholder of the election just as every Ghanaian. For that matter, the peace we cherish as a nation and the mutual respect we have for each other as Ghanaians must not be threatened because of the 2020 General elections.

Ghana shouldn’t cry for peace at the end of elections 2020. For that to happen, the peace we want depends on what we do as stakeholders of this election. The peace of this country should be preserved, but it requires a concerted effort by all its stakeholders especially the Electoral Commission, all participating political parties, the professional, impartial and resilient military, the ethical watchdog media, the various religious councils, the informed Civil Society Organizations, the peace-loving citizens, and all other state agencies.