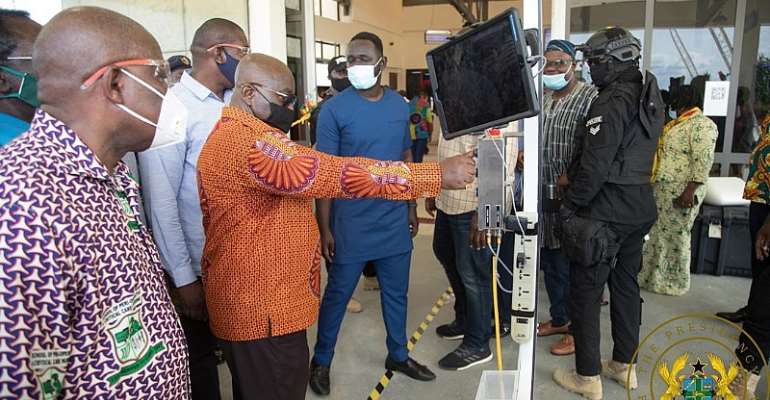 This was nearly a year after launching the second medical drone distribution centre at Mpanya in the Ashanti Region.

According to President Akufo-Addo, “the launch of the fourth medical drone distribution centre, is part of our broader commitment to expanding the reach of this service, and ensuring that we do not leave anyone behind in access to essential medicines. By this, it means that we now have the biggest medical drone delivery service in the whole world.”

Speaking at the commissioning ceremony, the President noted that even though some political actors went as far as making unfortunate, ill-considered statements about the drones, the Ghanaian people can all see how impactful this service has been, just within the past eighteen months of its operations.

“I am told that some one hundred and twenty thousand (120,000) medical products have been delivered to several health facilities across the country from the various distribution centres. With the coming on stream of this fourth centre at Sefwi Wiawso, Zipline will be able to serve about two thousand (2,000) health facilities within their range,” he said.

Citing the example of one Charles Coffie, a 44-year-old driver in the Eastern Region, for example, who was saved by the supply of emergency blood products after he suffered severe bleeding during an operation, the President stated that “this is the kind of impact we are talking about”.

He also noted that in the early days of the country's fight against COVID-19, medical drones were engaged to expedite the transportation of samples to laboratory centres across the country.

“We have also heard very positive stories from health practitioners of the various health facilities benefiting from this project. These testimonies point to one thing – we cannot afford to play politics with everything in this country,” he said.

The President continued, “The incessant politicisation of all issues does no credit to Ghanaian public life. When Zipline is called to supply blood products during emergency situations, it does not ask if the recipient is an NPP or NDC member before doing so. Health, like many other aspects of our national life, knows no party colours.”

With the coming on-stream of the fourth distribution centre, Zipline now has the capability of serving about two thousand (2,000) health facilities within their range.

The President was excited that the Ministry of Health and the Ghana Health Service and other key stakeholders have already initiated discussions with Zipline towards the possibility of expanding the drone services to other deprived and hard-to-reach communities.