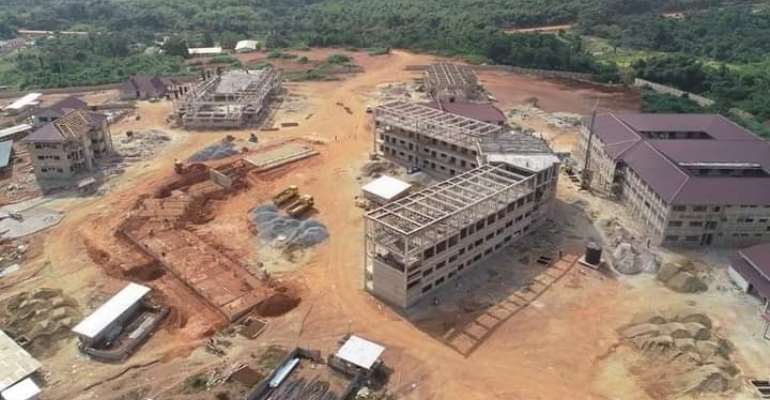 The ruling New Patriotic Party (NPP) has stated that President Akufo-Addo has constructed a total of 2,729 classrooms with capacity to accommodate 109,160 pupils and has commenced the construction of seven (7) brand new modern Senior High Schools across the country.

The NDC Presidential Candidate John Dramani Mahama has consistently challenged President Akufo-Addo to show to Ghanaians a single Senior High School constructed during his tenure despite the huge borrowing.

But addressing the media at Akyem Abomosu in the Atiwa West Municipality in a series dubbed “the Youth Must Know”organized by the youth wing of the NPP in Eastern Region, the party explained “In less than 4 years, President Akufo-Addo has built 2,729 Classrooms that can accommodate an extra 109,160 pupils whereas Mr. Mahama in 4 years built 840 Classrooms that accommodated just about 33,600”.

“This magnificent, state of the art buildings you have seen here in Abomosu, in the Atiwa West District in the Eastern Region is one of the 7 ultra-modern New SHSs being built by the Competent Government of President Akufo-Addo. The people of Atiwa are grateful to President Akufo-Addo and Hon Kwasi Amoako-Attah, their affable MP for this significant investment. The rest of the projects and additional two (2) existing schools being upgraded to model schools are ongoing in Kwadaso, Dabaa, Akrodie, Koase in Wenchi, Diaso in Central Region, Weija in Ga South, Kpasenkpe in West Mamprusi District and Awaso in Tarkwa Nsuaem. Fellow Youth, the government is also constructing 21 sophisticated Technical and Vocational Education Training (TVET) Centers of Excellence across the country. One of the ultra-modern TVET centers is situated in Anyinam in the Atiwa East District in the Eastern region. The NDC in their 8 years stay in power cannot boast of even one of these.”

Jerry Osei Opoku, the Eastern Regional Youth Organizer of the NPP said, it is a palpable falsehood that Mahama’s administration completed 45 E-Blocks before exiting power on 7th January, 2017. According to him, official figures emanating from a thorough infrastructure audit done by GETFUND, the Mahama led Government completed only 29 E-Blocks.

“For emphasis, out of the 200 E-Blocks the deceitful NDC party promised to build as captured in their 2012 Manifesto, they could complete only 29 which translate to 14.5%. This is a total failure. Secondly, the boldness with which the NDC refers to the E-Blocks as New SHSs and engages in self-flattery is very laughable. Acknowledging the E-Blocks (some 24 classrooms, a library and few offices) as New SHSs and asking to be patted on the back is simply a glorification of mediocrity.

“Now the Youth, we are not oblivious of the facilities that qualify a school to be acknowledged as a New SHS. A standard SHS must have the following facilities: Administration block, Classroom blocks, Dormitory Blocks, Dining Hall, Assembly Hall, Laboratories, Library, Creative Arts/ Science Block, Staff Accommodation, Recreational Facilities, Roads and External works, Service and Maintenance Shed among other, as you can find on this premises. From the foregoing, it is clearly awkward for the Corrupt NDC party to suggest that the mere construction of a Classroom Block with one or two other ancillary facilities means they have built a new SHS”.

He said, “If building just a classroom block is all it takes to establish a new SHS, then-President Akufo-Addo could count not less than 500 “New SHSs” in less than 4 years. This is because the government has put up over thousand (1,000) infrastructure, comprising classroom blocks, dormitory blocks, libraries, laboratories etc. in existing SHSs across the country. If these infrastructural projects were to be isolated and converted into New SHSs by merely giving them new names as the logic of the NDC suggests, this government would have, as I said, constructed over 500 new SHSs.”

Jerry Osei Opoku said “analysis on the number of space (Classrooms) created by NPP (in less than 4yrs) and NDC (in 4yrs) to increase enrollment in SHS. President Akufo-Addo (in less than 4years) has constructed:

Assuming that the average capacity of the classrooms is 40 pupils:

The NPP said in the hastiness by the NDC to hoodwink Ghanaians with promises they have promised to make TVET free. “Our simple response to them are:TVET is already free and over 65,000 learners have benefited from

it. Free TVET is a component of the Free Secondary School Policy which has been running since 2017”.