The Real Witch-hunting In Africa 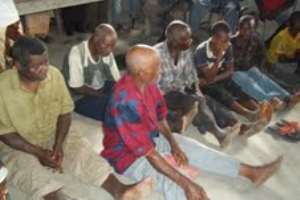 For westerners, witch hunting is a relic of the past, a phenomenon that belongs to early modern Europe, and 17th century Salem America. Witch-hunt features in contemporary discourses as a metaphor to describe the persecution of one’s political opponents. Otherwise, the term, witchcraft, encapsulates entertaining anthropological tales. But in many parts of Africa, this is not the case.

Far from being a metaphorical expression, witchcraft is a frightful reality. Witch persecution persists, rages, and manifests in most vicious forms across the region. In recent months, there have been horrific attacks and vigilante killings of alleged witches in Nigeria, Ghana, and Malawi. As in early modern Europe, alleged witches in Africa are still targeted. They are burnt, stoned, and subjected to various trials by ordeal. Here are some recent examples:

In May, a local politician set ablaze 15 persons suspected of witchcraft in Cross River State in Southern Nigeria. Among the victims were the politician’s mother, uncles, and other family members. According to eyewitnesses, the politician stormed the village with his witch finding team, dragged these relatives from their apartments, and threw them into the fire.

He embarked on this witch cleansing exercise after he claimed to have seen these family members in a dream threatening to kill him. Three of the suspected witches have died as a result of the burns while other survivors are battling for their lives. Local authorities have yet to arrest and prosecute the perpetrators. Justice continues to elude victims of this horrific violence.

In July, a local mob lynched Akua Denteh, a 90-year-old woman accused of witchcraft in Ghana. A diviner claimed that Denteh was responsible for the death of her children and intended to deploy her magical powers against persons in the community. Her accusers brought her to a public square where she was beaten, stoned, and eventually set ablaze while other community members looked on. Denteh’s granddaughter was among her assailants.

Like Nigeria, Ghana is notorious for persecuting witches. Hundreds of victims have taken refuge at some protective shrines known as witch camps in the country’s northern region. Unlike the Nigerian case, the authorities in Ghana have arrested and are prosecuting the witch bloodletters.

In a related development, some angry mob reportedly stoned a man to death for allegedly killing a relative through witchcraft. The incident took place in Dedza in Central Malawi on September 1, 2020. The ‘bewitched’ relative bewitched was living in South Africa. Western anthropologist, Peter Geschiere, aptly described this transnational bewitchment as ‘African witchcraft going global’, as opposed to the localized, village-bound witchcraft manifestations. Witch believing African migrants who take ill or who experience difficulties in far off places due to lack of documents, inability to access to social benefits, lack of jobs and employable skills ask family members back home to consult local diviners, pastors, prophets, and mallams.

Very often these charlatans, based on the information that witchcraft fearers provide, point out these ‘enemies within’ who are usually family members. Certified witches are attacked or murdered in cold blood as the above-mentioned cases have vividly illustrated. These attacks and killings are not isolated incidents but frequent occurrences in many African societies.

Witch persecution predates colonialism and is linked to ‘primitive’ health/security management and healing practices. Witchfinders are social/health care providers. Before the introduction of orthodox medicine, the line demarcating magic and medicine was blurred. Knowledge of medicine was quite rudimentary.

Herbal concoctions and rituals were the main components of the health care enterprise. Malevolent witchcraft was widely accepted as a narrative for making sense of death and diseases that defied natural understanding of the common sense of medicinal knowledge of traditional priests and healers.

But colonialists brought some change. They introduced orthodox medicine and enacted legislation that prohibited these harmful practices. Incidentally, the measures taken during the colonial era had limited impact; they fell short of realizing a sea change in understanding, and the management of causes and cures for various misfortunes. The colonial policies were unable to contain and dispel occult fears and anxieties. Instead, these measures drove witch finding and persecution underground consigning this medieval European throwback to rural communities and places with little or no contact with the colonial administration.

In postcolonial Africa, foreign political hold and influence on Africa weakened and in some cases completely disappeared. Limited police presence, poor health infrastructure, and a school system that mixes education and indigenous, Christian and Islamic religious indoctrination, a habitual disdain for critical thinking have yielded a reinforcement of magical potencies and efflorescence of occult fears.

This postcolonial climate provided a subsoil for the manifestation and valorization of witchcraft beliefs. For instance, police posts exist in these communities in Nigeria, Ghana, and Malawi where vigilante groups lynched or stoned alleged witches to death. But the police did not intervene. Very often there are few officers at these police posts and they lack the equipment to tackle the lynch mobs. Many of these police officers believe in the reality of witchcraft. Witch hunters execute their violent campaign at the invitation of community members including students and teachers who strongly believe in the reality of witches.

But I must acknowledge that nothing has testified to the intellectual rot and corrosive effect of witchcraft fears more poignantly than a protest by Christian university students in November last year. Christian students at the University of Nigeria, Nsukka opposed the organization of an academic seminar on witchcraft at the university. They claimed that the event was an open invitation to witches and wizards to take over the campus. These students organized a parallel prayer conference to spiritually counteract the event. The program went ahead but after the organizers moved the event to another venue because the initial venue was canceled. The organizers also changed the theme of the seminar from, Witchcraft: Meaning, Factors, and Practices to Dimensions of Human behaviors.

In addition to the widespread horrific attacks of alleged witches and impunity including the unimaginable torture and abuses that are meted out to suspected witches, the controversy over this academic conference on witchcraft was for me the tipping point. I could not believe that university students, petrified by occult anxieties could rally against an academic event in such a bizarre and embarrassing manner.

So in response to this outrageous situation, I launched in January the Advocacy for Alleged Witches (AFAW) project. I outlined the vision of ending witch persecution in Africa by 2030. AFAW seeks to realize this objective by defending and empowering alleged witches; educating and enlightening witchcraft accusers and believers, pressuring state authorities to protect citizens and maintain law and order, and fostering critical thinking in schools.

Since January, AFAW has organized two campus meetings at universities in Ibadan and Nsukka on the theme: Who is afraid of witches/witchcraft on campuses? AFAW has intervened in cases of witch persecution in Nigeria, Ghana, and Malawi. In fact, in less than a year after the launch, AFAW is overwhelmed by requests to respond and intervene in cases of persecution and abuses liked to the belief in witchcraft and occult harm.

Since April this year, AFAW has successfully intervened in a case where a man was almost lynched for 'stealing' the destinies of youths in the community through occult means. AFAW has supported victims of witch-burning in Cross River state, child witch victims in Plateau, and Ogun states. We continue to draw the attention of local authorities to the disgraceful witch-hunting activities in Mokwa Niger state.

In this case, a local Muslim witch hunter, Hassan Patigi performs witchcraft exorcism using sachets of water and subjects alleged witches to torture, inhuman and degrading treatments. AFAW has petitioned the authorities in Ghana, Zambia, Nigeria, and Malawi drawing their attention to witch persecution in these countries.

We continue to urge the government of Malawi to take urgent step to end vigilante killing of alleged witches in the country. AFAW has asked the police to investigate the activities of a local witch hunter who imposes heavy fines on alleged witches and abducts those who are unable to pay, holding them hostage until they pay up. Plans are underway to organize critical thinking workshops in schools and to encourage African youths and students to question ideas and beliefs. To realize a witch-hunting free Africa, a critical mass of Africa must embrace the habit of critical examination of beliefs.

We warned gov’t against reckless borrowing, wasteful spendin...
46 minutes ago