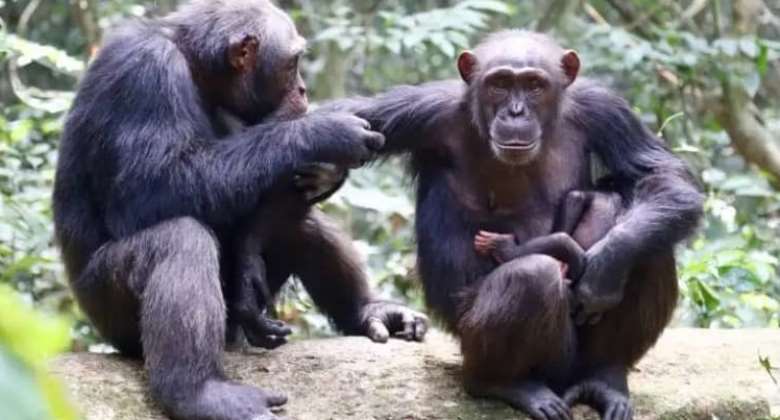 Do you know that human beings and their primate cousins, chimpanzees, share almost the same DNA (Deoxyribonucleic acid)?

DNA, is the king of molecules as Wikipedia says. It is a self-replicating material, which is present in nearly all living organisms as the main constituent of chromosomes and carrier of genetic information.

Humans share 98 percent of their DNA as chimps, and are susceptible to some of the diseases confounding human beings. Chimps are known to have caught human respiratory diseases including a type of human coronavirus that can prove fatal according to a mongabay.com

A team of African researchers have set out to find out the correlation between the diet of wild chimps and its medicinal or nutritional potential to cure ailments ranging from worm infestations to bacterial, fungal and viral infections such as cancers in ‘wildlife pharmacy’ search for therapies.

An Ivorian Botanist and Phytochemist,, Dr Constant Ahoua, and lead investigator disclosed to the Ghana News Agency that the team had identified compounds that are able to kill bacterial and yeast infection in petri dish and even some that seem to inhibit cancer development.

He said a total of 27 plant species eaten by wild chimps, specifically targeting those not already known to be used in traditional human medicine, indicating with the extracts from the plants, 18 percent were active against bacteria and five percent against yeasts.

He is optimistic the research would lead to the discoveries of new antibiotics and antifungal or cancer treatment or therapies.

For the study on chimps, the Phytochemist said ‘’we tried to study the therapeutic potential of plants consumed by chimps and the results showed that, these plants have high antioxidant, antimicrobial, anticancer and nutritional potential.’’

Chimps are not the only animals that self-medicate. Pregnant elephants in Kenya seek out certain tree leaves to induce labour. Wild boars in India seek out and eat a root used by humans too to get rid of parasitic worms.

Cats are found to regurgitate to eliminate all indigestible matter from its digestive tract, making it to feel better by nibbling those long-green blades of wheat grass, according to a pet library, pets.webmd.com.

Michael Huffman, a professor at the Primate Research Institute in Kyoto, Japan highlighted the essence of medicinal plants that have been discovered from the study of animal diets are mostly also recorded in traditional human medicine.

“For this reason I think the work in progress in Côte d’Ivoire is very valuable,” Huffman says indicating “We can never have enough of these kinds of studies since the plant flora across Africa is diverse and animals in one part of Africa will definitely be exploiting different species than the same or related species in different parts of the continent.”

Prospects from the research

Prof Alfred Oteng-Yeboah, formerly of the Department of Plant and Environmental Biology, University of Ghana said ‘’This is very important study, which must convince all researchers in chemistry, biochemistry, pharmacy and bio-medical research and centres in the tropical world to undertake. In so doing, they will bring attention to healing heritage, which are found in our forests.’’

He said the tropical plant species screened in the study observation of such biomedical, biochemical and biomolecules, whose properties show potential activities for anti-inflammation, anti-oxidant, anti-microbial and also showed the presence of Quinone Reductase-inducing compounds that have cancer chemo-preventive properties was revealing.

That many important medical discoveries came about through trial and error, serendipity and also through various forms of observations on the use of plants by wildlife, in this case the Chimp diets, or the characteristic features portrayed by the plants in form and structure especially of leaves and flowers, behaviour, growth, associations with insects and other pollinators and other plants.

Prof Oteng-Yeboah said ‘’Traditional knowledge must be fully documented for use by the next generation of researchers, this means we should save our forests and sustainably use them’’ to derive the huge potential of the ‘jungle pharmacy’ to benefit mankind.

Dr Ahoua said ‘’it is important to take care of chimps and their environment because they are sources of medical knowledge and their diets could be used for the search on new molecules usable in humans.

‘’The next step is to produce improved traditional medicine and for this purpose, contact has been established with an Indian firm for collaboration.

Currently, with the support of Afrique One-ASPIRE, we are working on a project on the utilisation of local plants, including those from the diet of chimps in the fight against COVID-19 virus.’’

The Director of West African Centre for Cell Biology of Infectious Pathogens (WACCBIP), Prof Gordon Awandare said the ‘’studies are interesting ....we have many plans that are known to have some of these effects, so that by itself is not a big deal.’’

‘’What Africa needs is investment in more advanced research to take this type of studies to the next level of isolating active compounds and developing them into drugs.’’

Scientists at WACCBIP and the Noguchi Memorial Institute for Medical Research have collaborated to sequence the whole genomes of SARS-CoV-2, the virus responsible for the coronavirus pandemic.

Mr Luri Kanton, Acting Director of Operations, Wildlife Division of the Forestry Commission of Ghana said population of chimps are concentrated in Ankasa near the Elubo border in the Western region and Bia in the Brong Ahafo (Bono or Ahafo) are known to eat from soft shrubs, flowers, fruits, cocoa pods to small rodents.

Conservationists estimate population of chimps (Pan troglodytes versus) declined by 80 percent between 1990 and 2014. Large tracts of chimps habitat have already been lost and much of what remains is in the crosshairs of agriculture, industry and infrastructural development.

Drivers who drive more than 8hours nonstop to pay over GH¢60...
6 minutes ago

"Obviously reluctant and insincere public apology" — GRNMA b...
6 minutes ago