Restoration of Demolished Nigerian High Commission Building Is Only A Gesture 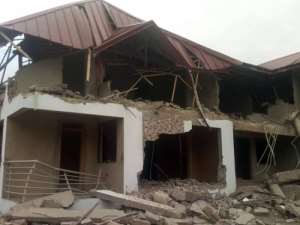 The Ghana’s Foreign Affairs Minister, Honorable Shirley Ayorkor Botchway, announced on Wednesday, 24 June, 2020 that the Government of Ghana would restore the building of the Nigerian High Commission that was demolished by a Ghanaian businessman on June 19 to the position it was before the demolition.

But this is a friendly gesture, and not an obligation. Investigations have confirmed that the Nigerian High Commission did not legally acquire the parcel of land and also failed to respond to Ghana Lands Commission request to settle the matter with the right owner.

A Ghanaian businessman claimed that the Nigeria High Commission had trespassed his plot of land in the capital Accra. The High Commission elected the building on his parcel of land, so, he hired a bulldozing firm to bring down the structure after the High Commission refused to respond to his queries and a letter from the Lands Commission of Ghana.

The businessman, who had previously claimed that he owned the land where the Commission’s building was put up, led the demolition operation, according to an article posted on the Nigerian High Commission’s website in Ghana.

"The man showed up last week with some papers to support his claim and began to knock down the fence surrounding the building," the article quotes a source at the ministry of foreign affairs as saying. Nigeria's Foreign Affairs Minister Geoffrey Onyeama said a bulldozer was used during the 19 June incident which destroyed two residential buildings.

The Nigerian Foreign Commissioner called the demolition "outrageous and criminal" and urged Ghanaian authorities to protect Nigeria's diplomatic buildings. Nigerians living in Ghana held a demonstration on Monday June 22 to condemn the demolition.

Ghana's foreign ministry issued a statement that it regretted the incident and guaranteed that an investigation would be conducted, adding that security had been "beefed up" at the facility.

The country's former President John Mahama, however, condemned the demolition and criticised his successor's government.

“It beats my imagination how such a violent and noisy destruction could occur without our security agents picking up the signals to avert the damage," Mr Mahama tweeted.

Nigerian newspapers reported on the matter with various tones. Ghanaian authorities arrested two persons in connection with the incident and have been charged with unlawful entry and causing unlawful damage.

Some Nigerian journalists are of the opinion that the demolition could spark a diplomatic row between both West African neighbors. The Pulse of Nigeria reached out to Ms. Sarah Sanda, the Special Assistant on Media to Foreign Affairs Minister Geoffrey Onyeama for a reaction. But “she promptly cut off our calls”, says the newspaper.

A text message sent to her on the development also received not reply.

The Pulse reported, “The man showed up with evidence to support his claim and began to knock down the fence surrounding the building. The action of the man was not opposed. The Nigerian High Commission petitioned the Ghanaian government about it, but there was no response.”

“Days later, he (the businessman) returned to the premises of the staff quarters and this time, with a bulldozer,” ChannelsTV reports.

Joy News in Ghana reports that “some armed men stormed here with bulldozers and threatened staff of the embassy and while doing that, they pulled down the building.”

The businessman erred in that he did not obtain court order before embarking on the exercise. He needed an order from the court before he could embark on such action. In Ghana, one cannot demolish a disputed building without court order.

The silence position of the Nigerian High Commission showed that it was trespassing on a private citizen’s property and simply acting at will, disrespecting Ghanaian authorities and abusing the right of a Ghanaian citizen.

The situation has sparked expressions and opinions. Several Nigerian citizens has tweeted their reports and opinions on the matter. One Ms. Nefertiti tweeted, “How did Nigeria get here??? Nowadays, smaller African countries disrespect the once African giant.”

Emmanuel Kabutey, who is in charge of security at the Nigeria High Commission in Ghana said when police officers arrived at the scene, they did nothing to stop the demolition.

“When the police came, with the bulldozer outside, they had a friendly chat with the leader of the bulldozing team, exchanged phone numbers with him and allowed him to go,” Kabutey said.

The Ghana Police can only act to restore order. In Ghana, if a person produces a land title of a parcel of land, he or she is the legal owner. It means, the person has every right to do whatever on the land. In such case, the Ghana Police has no power to intervene or stop the action.

If the police are called to the scene, they would ask the accused to produce the title of ownership. If the accused shows the valid document, the police cannot hinder his action.

The Cable of Nigeria showed the video of the moment the building of High Commission was demolished in its internet site.

The Nigerian Minister for Foreign, Geoffrey Onyeama, on Sunday, June 21, said in a tweet that the demolition was the handiwork of criminals.

"We strongly condemn two outrageous criminal attacks in Accra, Ghana, on a residential building in our diplomatic premises by unknown persons in which a bulldozer was used to demolish the building.

“We are engaging the Ghanaian Government and demand urgent action to find the perpetrators and provide adequate protection for Nigerians and their property in Ghana.”

The BBC reports that recent incidents serve as a reminder that the diplomatic ties between Ghana and Nigeria haven't always been smooth. The report tabled last year’s disputes over the status of foreign traders that led to the temporary closure of some Nigerian-owned shops in Ghana.

Another recent source of contention was Nigeria's decision to close its border with Benin, which affected traders across the region, including Ghanaians.

However, few people expect to see the type of tensions that were witnessed between the two West African nations in 1969-70 and 1983, when both sides expelled large numbers of the other's citizens.

On November 1969, Ghana expelled Nigerian migrants from its borders.

As far back as the early twentieth century, Nigerians had been well-established in Ghana and had contributed immensely to the socio-economic development of Ghana before and after independence. Nigerians constituted the largest single group of immigrants resident in Ghana as at 1931.

Adepoju argues that Ghana’s relative affluence at that time had made her the “gold coast” for thousands of immigrants from West Africa, particularly Nigeria, Togo and Burkina Faso. The immigrants were engaged as traders, cocoa farmers, farm labourers and farm contractors, factory workers as well as menial workers in construction sites.

It is not surprising therefore that beginning from the mid-1960’s, the overwhelming migrant stock of

mounted enormous pressures on government for increased participation of native peoples in the economic life of their country.

unemployment that had befallen Ghana. These aliens, mostly Nigerians, were quickly accused of posing a threat to the economic survival of the country.

In order to deal with the problem of Ghana’s economic malaise, attributed largely to the presence and

dominance of the migrant stock in Ghana’s economy, government decided to introduce a number of intervention policies aimed essentially at controlling the number of immigrant population and restricting the exercise of certain activities by non-nationals. One of such policies was the “Aliens Compliance Order” of 18 November, 1969, which affected some migrants from other West African Countries such as Togo, Burkina Faso, and Ivory-Coast, a majority of the victims were Yoruba’s from South-Western Nigeria numbering about 140,000, out of an estimated 191,000 Nigerian immigrant stock in Ghana then.

In 1983, the President of Nigeria, Shehu Shagari issued an executive order mandating immigrants without proper immigration documents to leave the country or they would be arrested according to the law in apparent retaliation to Ghana’s action in 1969. The order was in alleged response to the religious disturbances that had engulfed parts of Nigeria in 1980 (Kano Riots in 1980) and 1981. Most of the immigrants were West Africans and mainly Ghanaians. Over 2 million men, women and children were affected.

These Migrants were mostly attracted to Nigeria because of the oil market of the 70's, but in 1983 when the "Ghana Must Go" revolution started, the economy had weakened and was fast falling apart. It was also the election year.

“Ghana Must Go,” the Nigeria's 1983 expulsion of Ghanaians, comes into mind in the present matter. But any such situation as Shehu Shagari's orders in 1983 could not be justified in the present instance. Because the Ghana Mission in Nigeria cannot disrespect Nigerian Authorities nor abuse the rights of Nigerian citizens in a way Nigerian High Commission did.

Besides, both sides recognise the need for strong bilateral ties. President Nana Akufo-Addo apologised to Nigeria and ordered an investigation, a statement from the Nigerian government said after Nana Akuffo-Addo’s telephone call to President Muhammadu Buhari after the incidence.

Nigeria and Ghana are two countries that are spearheading various reforms to establish West Africa as an economic hub in Africa. There are a lot of projects, such the common currency, the ECO, trans-West African Roadway and Railway and Trade Pact, which demand close ties and cooperation between the two.

The recent closure of Nigeria’s western borders was a slap at the West African project, as well as Nigeria’s foot-dragging on ratifying African Continental Free Trade Area (AfCFTA) pact. Nigeria sighed the pact in 2018, but has since failed to ratify.

AfCFTA is a free trade area which, as of 2018, includes 28 countries. It was created by the African Continental Free Trade Agreement among 54 of the 55 African Union nations. The free-trade area is the largest in the world in terms of the number of participating countries since the formation of the World Trade Organization.

As of July 2019, 54 of the 55 African Union states had signed the agreement, with Eritrea the only country not signing the agreement. Of these member states 27 have deposited their instrument of ratification.

The demolition of the Nigerian High Commission’s building deviates from what can be described as a war between Ghana and Nigeria. This is a trespass of a Ghanaian citizen’s personal property by the High Commission, the businessman is a legal owner of the parcel of land, but the Government of God has rather resolved to let the Commission retain it.