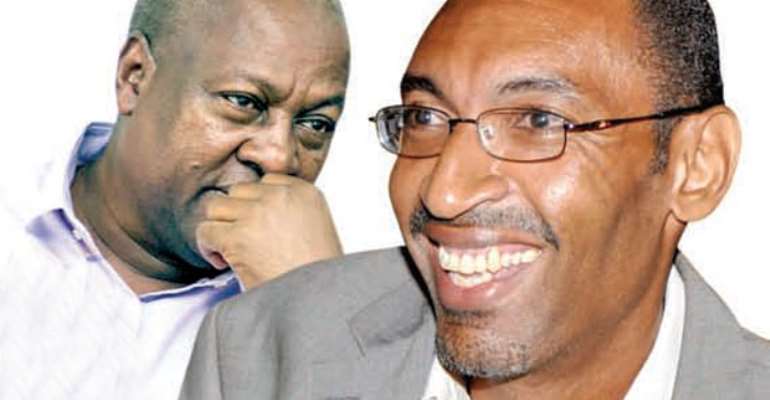 Dr. Sekou Nkrumah, a son of Osagyefo Dr. Kwame Nkrumah, has not given the National Democratic Congress (NDC) a dog's chance of winning the December polls with former President John Mahama as its flag bearer.

He said the party should go back and organize itself with a different candidate for the 2024 polls and forget about the 2020 contest.

For him, it is a mystery that the party did not change its leadership ahead of the polls, a direct hit at the choice of the former President as the party's flag bearer, who is staging a comeback after being trounced in 2016 as an incumbent.

In a series of social media posts which are anything but charitable about the performances of the NDC in opposition, Sekou said, “NDC should wait for another four years! Change Mahama and come back strong!”

This constitutes one of his most virile remarks about what in his estimation is the unsuitability of the party's flag bearer.

He officially joined the NDC on the day John Dramani Mahama was introduced as the running mate to the then candidate Prof. John Evans Mills at the National Theatre in Accra for Election 2008. But he subsequently resigned from the party after it took power.

He expressed worry that the NDC would think about returning to power considering the freshness of the memory about its incompetence and corrupt activities during its eight years at the helm.

Imbued with his late father's political rhetoric, he appears to have noted the journey of the NDC throughout its history, with this fact showing up in his literary presentations which he does with brevity yet comprehensively.

His poor rating of the opposition party's performance spans the tenure of both the late President Atta Mills and his successor, former President John Mahama, which he presented in one of his scathing posts on Sunday.

Sekou, who was sacked by the then President Mills as National Youth Coordinator, fired “it baffles me that the NDC leadership thinks Ghanaians have forgotten so soon their corrupt and incompetent eight years in government (under Mills and Mahama).”

His position that Ghanaians have not forgotten about the abysmal performance of the NDC when the party was in power is at variance with former President John Mahama's remarks a few years ago when he said “Ghanaians have short memory.”

With a touch of humour, his tweet last Monday riveted on one of the party's elders, Ato Ahwoi, whom he showed deference to with 'uncle'.

Life for 'Uncle Ato Ahwoi' has been halcyon, as he attributes this to the politician having what he describes as a 'sidekick'.

“I see life is good for Uncle Ato Ahwoi's sidekick! He has grown so fat that you cannot see his neck again!” he tweeted.

Being serious once more, Sekou turned to raw politics taking a swipe at the recent polemics over the performances of the New Patriotic Party (NPP) and the NDC when Okudzeto Ablakwa triggered the subject.

“But on a serious note, I think Ghanaians are more interested in what NDC has to offer and not what NPP has not!” he pointed out.

Corruption has appeared multiple times in his tweets, a drawback which many associate with the tenure of the former President.

He wondered how the former President would not tread on the same 'corruption' tangent when he returned to power.

“Again, how can they convince us that with the same leadership we will not have the same corruption we had under them?” he asked rhetorically.

With hindsight, he recalled the dark chapters of the National Youth Empowerment Programme (NYEP), which he has vast knowledge about.

“Personally, I have not forgotten the rot at NYEP and the subsequent jailing of the boss over there!” he said.

Sekou has punctured the underbelly of the NDC in a manner which should send shockwaves to the party's campaign managers.

With no end in sight to the negative posts and tweets about the NDC, the party should consider the behind-the-curtains engagement with the son of Ghana's maiden president over the possibility of a cessation of the damaging remarks and observations.

On the hullabaloo over an NDC manifesto, which is yet to see the light of day, he said “why are people asking for the NDC manifesto? They should just get the NPP one and just read the opposite!”