Bawku Decides; A Dawn For Hon. Gabiana Or Supremacy Of Ayariga? 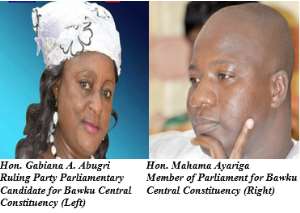 The Bawku Central constituency has been one of the swing seats since the return to constitutional democracy in 1992. The interesting dynamic has been the two major parties of NDC and NPP occupying the seat in different sessions. The narrative of Bawku central constituency will be inconclusive with the mention of Madam Hawa Yakubu the iron lady whose name became a household in the body politics of Ghana. She first came to the scene as an independent candidate and later through the NPP as a member of parliament.

It is important to juxtapose that, the issues of gender which remain a big challenge in the socio-economic and political spheres of Ghana, where women representation is very low, Bawku central constituency has for the past demonstrated maturity and intellectual concise to overlook gender dynamics as a panacea in voting a parliamentary candidate. Hajia Fati Seidu of NDC and Late Hon. Madam Hawa Yakubu of NPP once represented the good people of Bawku in the house of parliament.

The emergency of young vibrant Lawyer Mahama Ayariga in 2004 was welcome with high hope and aspiration as a firebrand intellectual that will help influence the course of Bawku as a parliamentarian. The cry of the ordinary people of Bawku reflected into an election victory. This offered Hon. Mahama Ayariga to rise from the ranks to become a spokesperson to President Atta Mills; Minister of Information to Ministry of Youth & Sports and later Environment, Science & Technology Minister. Collectively 12 years in parliament (2005- 2008, 2012- 2015 & 2016- 2020). The question; with all these years what can he show as his major achievement? does Hon. Mahama Ayariga deserves to be in parliament beyond 2020?

We must embrace election 2020 with a high sense of nation-building, honesty, and the future of our society and be more discerning enough. The upcoming general election must be a test of integrity, track record and development thinking. The electorate must demand answers from honourable Mahama Ayariga to the following questions;

How many young people have Hon. Ayariga empowered as an MP for Bawku central?

Of what benefits was his role as high profile government appointees to the good people of Bawku?

What is his achievement in women empowerment initiatives?

How many farmers or businessmen has he influenced to become successful?

How many young people did he influence to attained high education?

What track record does he have as a legacy

Why should we send him back to parliament as 12 intermittent years as our MP?

These salient questions would enable every young man, women, adult, farmers and every voter at large to be more focused on making a wise decision. We have come to the age in our life that, political leadership must be bestowed through merits, competence and passion for development. We cannot continue to be pushed by political orientation to vote on sentiment, ethnic orientation or tribal solidary, gender perspective and religious sentiments.

The inter-ethnic situation in Bawku indeed has been compounded by party politics in the early struggle to Ghana's independence. We cannot deny the historical antecedents preceding to party politics. However, embracing the 4th Republic, Bawku has entered a stable atmosphere with traditional authority well respected and devoid of the party- politics. The fundamental question to ask is having an incumbent MP who paternity is a Kusaasi and Maternity is a Mamprusi, it is an era to draw the curtain down that, tribal solidary cannot push us to elect MPs of convenience. We must show solidarity in supporting a candidate with the conscious of development, women empowerment and youth-focused.

The role of women in party politics in Bawku central constituency has been laudable, the contribution of Late Hon. Hawa Yakubu as MP and Minister has projected Bawku central as the land of women and men with courage, intellectual quality and vigor. Madam Hawa Yakubu is gone. Are we seeing the rebirth of Late Hon. Hawa Yakubu in Hon. Madam Gabiana. If we have missed Late Hon. Hawa Yakubu as a development MP, them the good people of Bawku must utilize this an opportunity to rewrite the political history of Bawku. Party colour must not matter; NDC and NPP must not be our decider; Being Male or Female Candidate must not be our priority; Being a Kusaasi and Mampruli must not be our concern. What we should focus on is the politics of tolerance and respect to structures and development centeredness.

Taken into consideration my electoral area (Kpalwega), the previous administration has extended the rural electrification to many households, it is not significant enough to applaud Hon. Mahama Ayariga for it because it was a central government policy to empower rural areas. Let me stressed that, women of my electoral area and many parts of Bawku need proper skill empowerment, highest educational attainment for young people and basic needs for a dignified life. His track record as an MP is not enough to send him to parliament in 2021.

Hon. Mahama Ayariga 'MP-ship' is only benefiting his cronies and few loyalists who designed the grand agenda of solidarize campaign strategy. We must rise to the occasion and vote with moral maturity and desist from the conspiracy theory of ‘tribalized solidarity’ a season political tool of allegedly Mamprusi dominated NPP and Kusaasi led NDC political divide have exploited us over the previous political seasons. This has cost us the quality of good leadership.

Let nobody be deceived that, academia or qualifications such Professorship, PHD holder, business entrepreneurship, being a Lawyer and or ability to speak excellent English 'big' grammar is a recipe for quality leadership. If one zeroes his understanding to this level, then it is a shame, because our grandparents who never had formal education institutionalized our traditional political systems that is still part of our modern system of governance. They were full of wisdom, knowledge and a sense of humanity than our era. The simple question is; what use is the value of intellectual quality if it doesn't profit your people?

Our elders toldus that, "a chick that will grow to become a cock can be sported the very day it is hatched ". 12 years is too long a time to deliver hope to your people. The reality must be told and the debate should be settle. Hon. Mahaya Ayariaga has paid his dues as a political figure in the Bawku Central constituency and it is time for fresh leadership. Bawku must show leadership once again in gender inclusion and a model constituency that has always believe in the power, voice and quality of women representation. We must espouse the ‘Skirt and Blaws’ approach if that is the last resort to retire Hon. Mahama Ayariga who doesn’t represent the good people of Bawku Central satisfactorily.

Concerning Hon. Gabiana A. Abugri, appears in the political scene and reminds all of the iconic Hon. Madam Hawa Yakubu who was more discerning, development-oriented and focused on women empowerment. Hon. Gabiana A. Abugri even as a party candidate was critical to women empowerment initiatives, youth engagement and above all transformational. Given the Kusaasi proverb, 'the chicken that will grow into a cock will be spotted from the first day it hatches'. I have no doubt that Bawku central will give the mantle to madam Hawa Yakubu in Hon. Gabiana A. Abugri. Zekula. We need vibrant woman who will remind us of Hon. Hawa Yakubu whose influence on Zekula has never been the same since her demise.

Admittedly, I am a gender advocate and for that matter, women's leadership is key in my development campaign. However, I won't just advocate for any woman to be elected. This is a candidate of a political party and I don't ascribe to any political party. She is a candidate that can be described as an Entrepreneur, Developer, and Change Agent and well-deserving of the hot seat of Bawku Central constituency.

Let me spare a paragraph and to called on the Bawku Inter-Ethnic Peace Committee to call for bi-partisan and none tribal political solidary going to election 2020. This will help in sanitizing the electioneering campaign season and to voting and electing our MP. The inter-ethnic peace committee has been credible and their contribution to sustaining peace in Bawku is highly commendable. This will give a lot of well-meaning young advocates and voters who will never think in the line of politics of continence, rather politics of inclusive, development, and fast forward match of Bawku central.

When water stays too long in a bottle it smells, Hon. Ayariga has stayed too long and must be retired by the good people of the constituency