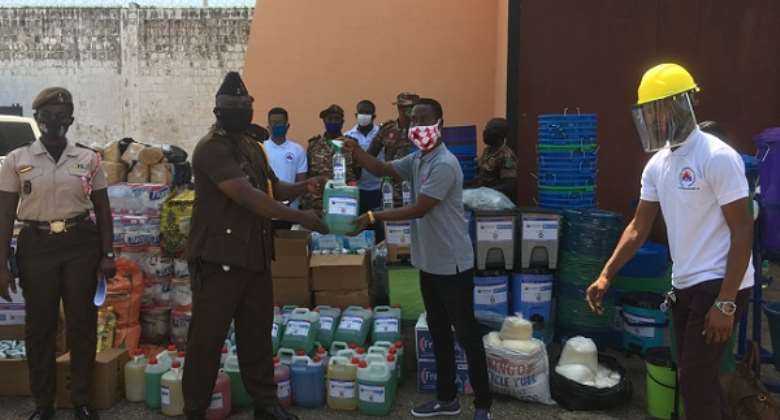 POS Foundation, facilitators of 'Justice for All' programme, has appealed to government to grant amnesty to non-violent convicts who are serving jail terms in prison for drug use in order to decongest the prisons in the midst of the Covid-19 pandemic.

According to him, the consequences can be dire if an inmate contracts the virus which has killed thousands across the world, as there can be no proper social distancing in the overly congested prisons.

The Executive Chairman of POS Foundation, Jonathan Osei Owusu, made the appeal when the organisation donated some personal protective equipment (PPE) to the Nsawam Medium Security Prison.

Besides, the organisation organized an orientation programme for the prison officers on the emerging trends of the Covid-19 outbreak.

An amount of GH¢2,000 was donated to the prison authority as part of support for transportation of some of the items to the Akuse and Koforidua prisons.

Speaking to the press after the donation, Mr. Owusu noted that one of the ways to decongest the prisons is to grant amnesty to non-violent convicts who are serving time for drug use who, according to him, pose no danger to society but themselves.

He commended the President for granting amnesty to some 808 prisoners in the wake of the growing numbers in the Covid-19 cases in Ghana but added that more can be done as seen in other parts of the world.

DSP Adamu Abdul Latif, who received the items on behalf of the Prison Service, thanked the foundation for the gesture and called on others to support them to ensure that no case of the virus is recorded in the prison.

He also called for amnesty for the aged and convicts battling chronic diseases, such as diabetes and hypertension, who are those who suffer the most when affected.

“Social distancing is a problem in the prisons. By helping to decongest the prisons, I think it will help lessen the challenges of managing the prisons. But our authorities are in control; they are in consultation with the government and they will do what is right for the prison and the prisoners,” DSP Adamu added.