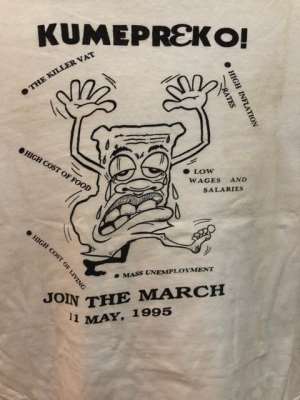 This is not a rejoinder but my reflection on a story and images that came to my attention a day after the 25th anniversary of the Kume Preko protest marches which fell on the 11th of May 2020…A sizeable percentage of the Ghanaian population was not even born.

I was present at the conception, gestation, birth and death of Kume Preko/AFC. It seemed such an unlikely proposition when we first discussed it at the Dansoman residence of Mr. Adjiri Blankson in early 1995. The first words leading to arguably Ghana’s biggest protest marches sounded like a joke or mere bluff and were spoken by Dr. Yves Charles Wereko-Brobby (Tarzan). Those words, the words that would lead to the earth-shaking events of 1995 still give me the goosebumps.

It happened this way: We had gathered, as guests of Mr. Blankson to celebrate with him some important event in his life – a birthday party, I think. As providence would have it, I was seated at the same table with Tarzan, Shey Shey Akoto Ampaw, and a couple of others. That was the period of the introduction of the Value Added Tax (VAT) and it was the talk of the country, so naturally, our chit chat turned to that subject. And then, in his inimitable way – call it even impulsive – Tarzan said in Twi, “we are tired” – “ya bre”! Already, an idea was germinating in that very fertile mind of his, and immediately started sketching plans for a public protest. They could as well kill us, he thundered and that was “Kumi Preko”! It was pure genius. He did not use the plural but personalised it so each individual could own it hence kume not ku yen.

As the night wore on and the lubricating fluids watered our thirsty throats, we got quite brazen with our hopes of getting people out to protest – something up to that time was rare in Rawlings’ Ghana – except for another Tarzan inspired public show of disapproval in the November 1994 Radio Eye demo which was violently suppressed.

During our chit chat, I let drop a suggestion that was to prove very crucial in the planning and execution of Kume preko. As editor of The Statesman I offered the paper as a media partner. For starters, I would do a story about an impending demo to hit Accra.

I subsequently discussed a story outline with the late Ferdinand O. Ayim (Ferdy to some, Freddy to others), God rest his soul, and we produced a short catchy story, purely speculative, and put it on the front page of the next edition of the paper. The exact wording of the heading eludes me now, but it went something along the lines of “Big Demo to rock Accra”. The archives of The Statesman of March or April 1995 can be cross-checked for accuracy. The story must have spiked public interest and spooked the authorities’ sense of doom as the demo now assumed a life of its own. There was no dillydallying, it had to come on…

Dr. Wereko-Brobby went into high gear putting an organization together to turn the dream into reality and the Alliance for Change (AFC) was born. The original membership included, Dr. Brobby himself, Kweku Opoku, Kweku Baako, Kakraba Cromwell, Nyaho-Nyaho Tamakloe, Shey Shey Akoto Ampaw, Nana Akufo-Addo, Victor Newman and Kwesi Pratt. Through consultation and acclamation, they selected Nana Akufo-Addo as spokesperson, NOT leader. In fact, all the members were erudite and politically savvy enough to qualify to play the spokesman role but deferred to their collective decision. Members like Kwesi Pratt, Wereko-Brobby, Nyaho Tamakloe and Kweku Baako were already well known accomplished public speakers on political platforms and sharp debaters on the electronic media. Kweku Baako and Kwesi Pratt, as foot soldiers for the AFC were very effective in moving around to canvass the support of different political constituents and critical individuals. Kweko Opoku, a designer by training who later would become the Managing Director of a major advertising agency put the Kume Preko image together, with a cartoon (shown above) by Zingaro, one of Ghana’s finest. He also designed the Radio Eye logo. The station’s jingle was composed by the late Jon K and performed by Nana Yaa, Pat Thomas’daughter. I am also aware of some initial sketches for an AFC logo Mr. Opoku was working on.

Some AFC members like Kweku Opoku and Victor Newman were not political platform performers but the likes of Kakraba Cromwell were gold medallists! Tarzan’s house at Ridge became the command centre coordinating all the activities, including fund raising, security, media, political liaison and meetings with the diplomatic corps. Amidst all of that he still made time to churn out numerous statements and other write ups for the media. The Statesman’s Ferdinand Ayim brought up the rear with his regular reports to the newspaper.

I produced a 20-minute documentary on the AFC and Kumepreko. My copy was sadly washed away during one of the mega floods of Accra. For the music and effects soundtrack, I used Gustav Holst’s “The Planets”, specifically “Mars the Bringer of War”.

The AFC was not as seamless as in its image presented to the outside world. There were suspicions and semblances of alliances among the members and I have been privy to some very scathing comments regarding the acts of omission or commission of some members, of which I am not at liberty to repeat here. If there were any meetings out of the main command centre, then they were presumably for such fissures.

The issue as to whether the AFC should be converted into a political party or not, was a contentious issue, and so was its relationship to the political parties jostling for Election ’96.

After running its course, the AFC lost steam and its mission became unclear. Those with ambitions towards Election ’96 like Nana Akufo-Addo drifted back to their mother parties – not that they ever left in the first place. Later the controversy surrounding the Great Alliance led Tarzan to form his own United Ghana Movement (UGM) to contest those elections. The AFC did not end in a blaze of glory of a Kume preko march, but simply fizzled away with the members pinning their individual interests to the masts of their political traditions.

The history of Kumepreko/AFC would fill volumes and no doubt provide many different angles, but one fact that cannot be airbrushed away, is the role of one man, its architect, whose sustaining enthusiasm led to the formation of a unique milestone in Ghana’s post-independence history: Dr. Yves Charles Wereko-Brobby – Tarzan!

But that history will also completely miss the point if it left out the real heroes – the hundreds of thousands of Ghanaians who heeded the call of the AFC and took to the streets of our national and regional capitals to protest, with some of them paying the ultimate price with their lives: 14-year-old Ahunu Hongar, 17-year-old Jerry Opey, 23-year-old Kwabena Asante, and 43-year-old Richard Awungar were killed on the first march in Accra 25 years ago. They are the martyrs of Kuma Preko and it would be most unfair, unjust and insulting, if 25 years later, any politician tries to desecrate their memory with his own messianic delusions…