Dowry Not Same As Bride Price 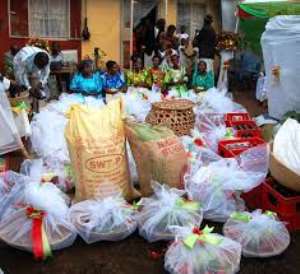 Dowry vs. Bride Price
Bride Price (or Bridewealth)
So what is the difference between the dowry and the bride price? The bride price is what it sounds like—a specific price (property, money, etc.) paid by the bridegroom (or his family) to the bride’s parents.

Depending on the society and the period, this could be either a set price for all brides (virgins having a higher price) or a negotiated price based on the perceived worth of the girl (beautiful or especially industrious women being more highly valued). In the biblical Torah, the former (a set price) seems to be assumed (cf. Ex 22:16–17; Deut 22:28–29), though this certainly does not rule out negotiation. In Classical Greece, it appears to have been a matter of negotiation, as indicated in the Odyssey. The practice continues today in various forms in many (usually Eastern) countries. (EDIT: As a commenter below who knows more than I do about this pointed out, I should probably have mentioned that the common anthropological term for this is “bridewealth,” not “bride price,”which was abandoned some time ago in the scholarly literature due to its implication of “buying a bride.” I chose instead to stick with the more common popular term for simplicity’s sake, while pointing out that it didn’t equate to buying a bride as chattel.)

In a large amount of anthropological and feminist literature, the bride price has been interpreted as a “market transaction,” recouping the woman’s family/kin group for the loss of her fertility and ability to work within the family unit, but I think this interpretation is significantly flawed in most cases (especially in societies that practice the dowry, as will be explained below). A better interpretation of the bride price is that it is a means for the bridegroom to prove his worthiness as a suitor, that he is capable of adequately providing for his bride. This is especially the case in those societies that practice a set bride price—often a nominal, quite attainable price. (Given that most Western women are expected to be capable of providing for themselves, this explanation also accounts for why the practice would be unnecessary in the West.) So, in effect, the bride price is the groom’s way of demonstrating his suitability as a provider for his wife. In modern (but still relatively conservative) terms, this would be the equivalent of a young woman’s family requesting that a young man get a job and have some financial stability before marrying their daughter—the bride price would be an agreed-upon attainable sum (perhaps a few thousand dollars) to be presented to the young woman’s family as a demonstration of this financial stability.

(A few problems have crept up with the institution of the bride price in some cultures over the years. On the one hand, some, usually poorer, parents have exploited the bride price as a means to attain wealth, asking for astronomical sums. An additional problem has been that as young men are not able to provide the bride price, it has often led to “marriage by abduction,” in which the girl/woman is kidnapped and sometimes raped in an attempt to force the parents to reduce the bride price and agree to the marriage—incidentally, this is one of the very problems Deut 22:28–29 attempts to address. Another problem is that women can come to be treated as “merchandise” to be bought or sold; this is not necessarily an inherent problem, but it can certainly accompany the practice.)

Ironically, for all the criticism the practice of the bride price receives from many modern people who regard it as a misogynistic practice, the now nearly ubiquitous Western practice of buying a woman an expensive diamond engagement ring serves as the modern equivalent to the bride price—only the money goes to De Beers instead of to the parents. So instead of “keeping it in the family,” the money is paid to the gods of consumer culture. Which practice is better, again?

Dowry
The dowry, on the other hand, is the wealth a woman brings to her husband as a part of the marriage. The dowry has usually been provided by the woman’s family at the time of the marriage; the idea behind the dowry is to aid the beginning of the new household, aiding the new husband in the provision for his wife. Interestingly, the dowry has usually been greater than the bride price in those cultures practicing both traditions, suggesting that the concept of “buying” a wife misunderstands the reasoning behind such transactional marriages. Consider the following scenario: a young man must pay a bride price of $10,000 to the bride’s parents before he marries his choice of a bride. When he marries her, she brings a dowry of $25,000 from her parents as “seed money” for the new marriage. How exactly would this work as “buying a wife”? That would certainly be the best mail-in rebate I’ve ever seen!

In addition to helping the young marriage start off well, the dowry also aimed to provide for a young woman in the event of her husband’s untimely death or a divorce (generally the dowry would need to be returned by the husband, making it financially difficult to divorce—modern “alimony” payments derive from this concept and the related concept of the “dower,” which was sort of like an ancient pre-nuptial agreement). Also, since in many past societies, women did not receive an inheritance from their parents, the dowry served as a substitute for the woman’s inheritance. Upon the death of a woman, the value of her dowry was to be divided only among her children—it was not to go to any of her husband’s other children, if he had any.

The practice of the dowry continued in Western culture significantly longer than the bride price, continuing until around the dawn of the Industrial Age. It features prominently in the novels of Jane Austen, for example; in Pride and Prejudice, the Bennet girls’ small dowries make them less attractive to suitors, while Darcy’s young sister is nearly the victim of an insincere and profligate suitor who wants access to her substantial dowry. In more modern times, at least in the USA, the wedding registry has taken the functional place of the dowry, with the friends and family of both bride and groom providing gifts to help better establish the new home.

(As with nearly any legal or traditional practice I can think of, dispensation of the dowry has also led to some abuses, such as bride burning and dowry death .)

Conclusion
So, let no reader of this blog make this mistake again: the dowry and the bride price are entirely different things, though each has an eye toward improving the success of the fledgling marriage. The bride price was paid by the groom to the bride’s parents, while the dowry was brought into the marriage by the woman, usually through the provision of her parents.

Latest Photo Reports
Catch up with all the political quotes from our politicians.
Advertise here
More from Love & Relationships
ModernGhana Links
Glorious Happy birthday to Mama Nahid Egala
Rebecca, Please Do The Needful
When there's a Breakup (Part 2)
TOP STORIES