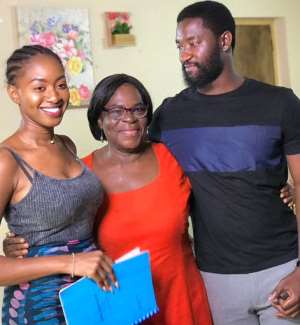 In photos sighted online, Dela Yawo Seade appears to have worked on a project alongside veteran Ghanaian actor Dzifa Glikpoe.

Dzifa Glikpoe began professional acting in 1983, and is one of the fifteen founding members of the resident company for the School of the Performing Arts at the commencement of the National Theatre in the same year. She won ECRAG Best Actress award in 1993 (Entertainment Critics and Reviewers Association of Ghana).

She has also twice been the Acting Director of the National Company and is currently the substantive director. Performance tours have taken her round the world including the UK for the Edinburgh Fringe Festival, France, Spain, Las Palmas, Texas, Nigeria, Burkina Faso and Togo. She is one of the few people to win a Presidential Award (Grand Medal Division) for Drama.

Dela Yawo Seade is an Actress, influencer and serial entrepreneur. She has been in movies and shows like Sugar the movie with Kidi as Afia Adiepena, Public figure as Wonder, Famous as Naya, Stryke as Joan, Infatuations as Mildred and Inspector Bediako as Ama.