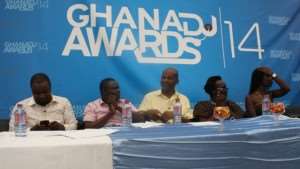 Organizers of Africa's biggest DJ festival, the annual Ghana DJ Awards, Merqury Republic, wish to announce to all Disc Jockeys and the general public that nominations have been opened for the 2019 edition of the awards.

At this first phase of the nomination process, interested DJs or their representatives are expected to submit an entry form, along with mixtapes, music releases, or two-minute videos showing a scratch session.

Other items to submit include:

These should be attached to submissions online or enclosed within an envelope addressed to Ghana DJ Awards Nomination, PO Box 2863, Kaneshie, Accra, Ghana. They may be emailed to [email protected] with links to mixtape or performance(s).

DJ fans also have the opportunity to nominate their favorite DJs and MCs across the world who promote Ghana music.

Besides the categories for which submissions are required, the awards, which is organised by Merqury Republic, bestows an individual or group a Lifetime Achievement Award. "The prestige associated with induction and receipt of the Lifetime Achievement Award is projected to exceptional individuals and/or groups who are recognized as leaders of our industry," says Felicia Bazie, Events Coordinator at Merqury Republic.

"Induction is not limited to any one (1) candidate(s) per year. Inductees will receive an official Ghana DJ Award inscribed with their name, and will be recognised with a synopsis of their history and contributions through a formal segment presented by selected peers and colleagues during the Ghana Awards gala."

Work submitted for consideration must have been released between 1 February 2018 and 1 February 2019. The public nomination process will take place from 2nd April to 10th May 2019.

The prestigious Ghana DJ Awards was created to celebrate and appreciate the talents of Disc Jockeys (DJs), as well as to foster the development of the Ghana music industry by rewarding and celebrating Radio, Mobile and Club Disc Jockeys who have excelled in their fields of endeavor. It is, actually, the only national award scheme in Africa that appreciates and celebrates DJs for their work. It is also a platform that rewards veteran DJs who have blazed the trail in the music industry over the years.

The main objective is to recognize the electronic dance music scene, and seeks to let the world know that the art of DJ’ing is a respected craft, with DJs playing a major role in the overall Music and Entertainment industry.

Ghana DJ Awards Festival 2019 is under the theme ‘Party In Ghana’.