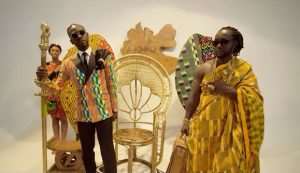 Okyeame Kwame has released the visuals to his single ‘Bra’, taken off the ‘Made in Ghana’ album. ‘Bra’, features Afriyie of Wutah fame. It touches on the theme of leaving the one you love just to realise you cannot do without them.

The song is a perfect blend of Okyeame’s thought-provoking rap and Afriyie’s glossy vocal delivery.

The contains scenes that perfectly jibe with the theme of the song, as well as showcase the rich Ghanaian culture.

This comes after the release of the theme song ‘Made in Ghana’ last year.