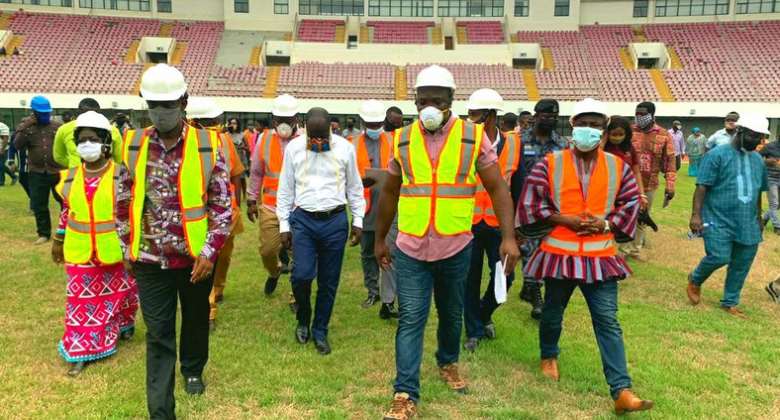 The Minister for Youth and Sports Hon. Isaac Kwame Asiamah (MP) and other dignitaries have inspected renovation works at the Essipong Sports Stadium on Monday.

Hon. Isaac Kwame Asiamah (MP) and other dignitaries conducted an inspection exercise at the Essipong Sports Stadium which has over the years has been left unattended.,

The Essipong Sports Stadium and the Tamale Sports Stadium were built by President John Agyekum Kuffour from 2006 and commissioned for the 2008 Africa Cup of Nations (AFCON).

The Essipong Stadium has served the needs of football clubs such as Hasaacas, Eleven Wise, Medeama, etc since its construction and commissioning in 2008.

The Essipong Stadium was closed down due to its deplorable state with the roofing of the VIP worn out and tattered.

The MYS has undertaken a number of renovations works in the various stadia in the country and some new community stadia have been put up across the country.

Minister for Youth and Sports, Isaac Kwame Asiamah disclosed in a media briefing that the renovation of the stadium will be carried out in two phases. The initial phase which is costed at GHC17,969,447.10 will cover the replacement of existing defective roofing sheets, sandblasting corroded roofing steels and application of heavy-duty coating system to guard against further deterioration of the metal structure from the mid-west to the south stand.

It will also include the replacement of damaged roof structural steel frame and bolts, waterproof treatment of leaking areas, general renovation of offices, plumbing and air-conditioning repairing works, renovation of all sanitary appliances, lifts, and fire fighting systems.

All these works are expected to be completed in a twelve-month schedule and is being executed by CISDAN Limited.

According to Hon. Asiamah Phase II of the project will cover the renovation of the spectators' seats, electrical installations, completion of hotel/hostel facilities and other works.