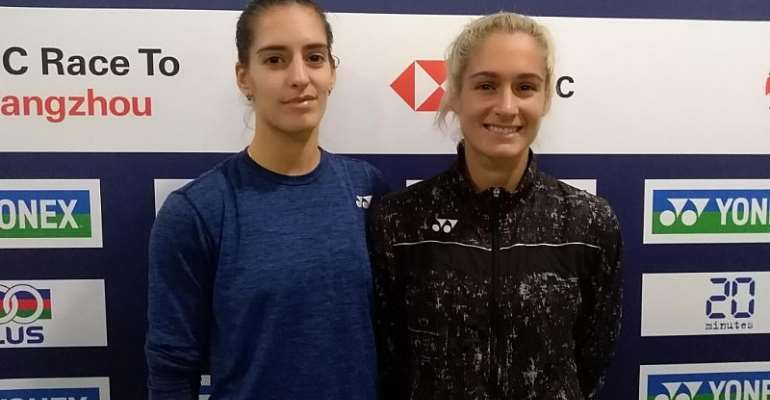 The delight on the faces of Bulgaria's Gabriela and Stefani Stoeva was evident as they triumphed over Thailand's Puttita Supajirakul and Sapsiree Taerattanachai in the French Open badminton tournament on Wednesday. Winning is special for the sisters in their new home of Paris.

It's just the first round of the French Open, in which they were finalists last year. But playing and winning in their adoptive backyard brings an extra sense of joy to the Stoeva sisters.

“This is our favourite tournament of the year. So many people are supporting us in what is our second home. Our parents are here and so are the friends from our club,” 25-year-old Gabriela said.

Their club, IMBC92, is situated in the Paris suburb of Issy Les Moulineaux which is a short distance from the tournament venue. “Our club, which is close to our apartment, is 10 minutes by bus from here,” she says.

The sisters' attachment to their club is evident from their jerseys, which bear the suburb's name.

“It's the city where we live. The club has supported us a lot especially when we were going through tough times. We are extremely thankful to them. That's why we have the name [on our jerseys],” Stefani, a year younger than Gabriela, says.

The Stoeva sisters, ranked 10th in the world in women's doubles, started their badminton journey from a little known place in Bulgaria.

“We come from a very small town called Haskovo, three hours from the capital Sofia. When we started playing badminton in 2003, there was no internet, smartphones or computers around us. The only thing we could do in free time was play with other kids outside or take up a sport. What helped us was that our father was keen on sports,” says Stefani.

Professional move
What started as leisure became a serious pursuit after 2006, when they won the under-13 Bulgarian national doubles title. The two moved to Sofia at the age of 15 to train under a professional coach.

After spending five years in the Bulgarian capital, Gabriela and Stefani decided to move to France to train under a new coach. “Our move to France was quite unexpected. We did so because of our new coach Mihail Popov,” Gabriela says.

Stefani said that Popov, a Bulgarian who moved to Paris in 1994, visited Sofia in 2014 to look for players keen on joining the IMBC92 club. “We came to France to play club team matches. Our coach saw some talent in us. He pushed us to put in a lot of effort and it worked. This was the best choice we made,” she adds.

Gabriela says since they had never played separately from one another, the coach asked both sisters to move to Paris. Their playing styles complement each other and make a formidable pair. “If she is good in the back court, I am good at the front,” comments Stefani. “It's a perfect match.”

So how has their game evolved since moving to France?

Gabriela says it's a sea change.
“Our coach made a lot of changes, not only in terms of technique but also our approach to physical and mental fitness. Earlier, when we entered tournaments and saw that our opponents were from Asia, we believed we had no chance. But since 2015, our thinking has changed and we fight for every point in every match.”

With that attitude, the Stoeva sisters have catapulted to the tenth in world doubles rankings, making them the only non-Asian pair in that top bracket.

At this year's French Open, they are hoping to build on the momentum from the first round and go one step higher than last year when they finished runners up.

Next up, the European championships in April and the 2020 Olympic Games in Tokyo.