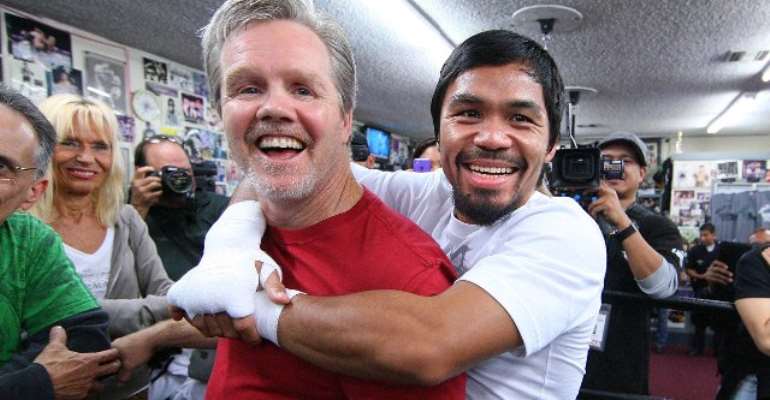 After guiding his son to win the world title, Paul Dogboe, the father of former Super Bantamweight World Champion, Isaac Dogboe, is ready to take the back seat as a legendary boxing trainer, Frederick Steven Roach takes over the 24-year-old pugilist.

In the aftermath of Dogboe’s second defeat to Emanuel Navarrete in their World Boxing Organisation (WBO) super bantamweight title bout at the Convention Centre in Tucson, Arizona, USA on May 11, many called for his dad to relinquish his role for a much more experienced and technically superior trainer.

It appears the camp of Dogboe has heeded to that call as Roach, who helped shape the careers of boxing greats such as Oscar De La Hoya, Julio César Chávez Jr, Miguel Cotto and Manny Pacquiao, becomes the Ghanaian’s new trainer.

“He will fight in featherweight in his next bout. He struggles with making weight in the super bantamweight division; this has been his blight all along,” Mr Quashigah stated.

Dogobe (20-2-0) will also move to California where he will attend the North Ridge University and practise his profession under the tutelage of Freddie Roach, popularly referred to as Freddie Roach.

Contrary to some views that it was about time Dogboe, a native of Keta in the Volta Region of Ghana, took some time off after his painful defeat to focus on his education, Mr Quashigah said the diminutive fighter would stage a comeback into the ring in due course.

“He is not going to stay away for too long as some persons are suggesting. It won’t be two years, it won’t be three years; he will come back soon,” he noted.

Mr Quashigah, who doubles as a boxing promoter and manager, believes Dogboe proved his mettle against Navarrete and even snubbed his father’s call for him to quit in the sixth round, but weight issues militated against him.

He believes Freddie Roach, who has trained other short boxers like Pacquiao to beat giants such as De La Hoya and the likes, can do same for Dogboe.

Mr Quashigah believes Dogboe is young and can come back to become a world champion again.