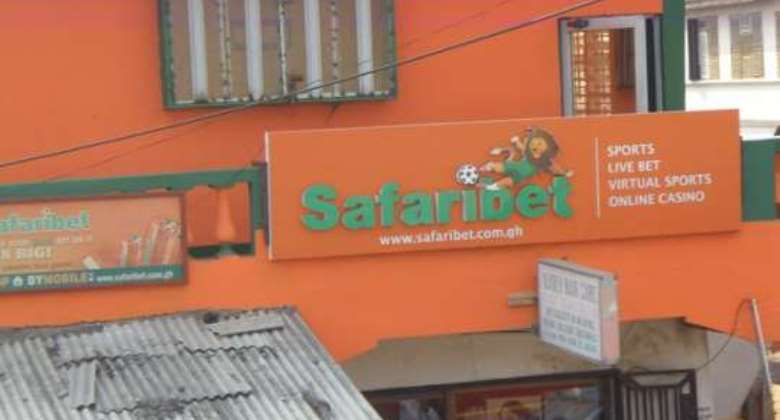 Accra, Jan. 29, GNA - The people of James town and surrounding communities have expressed worry about the rate at which sports betting facilities are springing up in the area within the last four years.

Sports betting, which is growing rapidly in Ghana was introduced about four years ago by some foreign businessmen including Chinese, Lebanese and South Africans.

Giant flat screens are provided by the operators showing some English premier league and other foreign sporting leagues around the world to enable the fans to place bets on the outcome of a particular sporting event with the payment of a small fee. If the bet comes true, one wins a bigger amount.

There is, however, an alarming increase in the popularity of the betting business in communities like Jamestown, Akoto Lantey, Jonshie, Bukom and Tafo Ohabula among others in the Asiedu Keteke districts of Greater Accra.

A number of the sports betting companies including Soccer bet, Safari bet, Premier bet, and Eurobet are located along the major street in these communities.

The Chief of Abola Apiame, Nii Tackie Oblie II, in an interview with the Ghana News Agency (GNA) expressed worry about the emergence of sports betting facilities which he feared will increase social vices in the community.

'The community has a youthful population who are unemployed and engage in fishing as the major occupation, but since these betting centers came into the area, most of the youth have abandoned the little jobs they were doing and have resorted to betting with the aim of making some quick money instead of engaging in meaningful jobs. If they are not working and they want money how and where are they going to get it? The only means is for them to steal', he emphasized.

Nii Tackie appealed to the government, stakeholders and NGO's to provide support for the establishment of a vocational training institution to reduce the rate of unemployment within the community.

'My chiefs and I have realized that one way by which we can also help to reduce the rate of social vices is to create job opportunities for them. We are ready to provide land for any individual or organisation that would want to offer any form of assistance'', he said.

The Assembly member for the Kinka Electoral Area, Mr. Emmanuel Botchway on his part, attributed the situation to poor supervision by the proprietors of those centres. 'We at the Assembly have seen that the owners do not control the activities well; we are therefore mapping out strategies to address the problem. Sports betting is one of the issues that will be tabled before members at our next meeting', he stated.

He pledged the Assembly's continuous support for the community to improve the level of education especially at the basic level despite the challenges confronting it.

A teacher at the Sempe 1and 2 cluster of schools told the GNA that the poor academic performance of some of the students and the increasing rate of school dropouts in those communities could be attributed to sports betting.

'We have found some students sleeping in class several times and our checks revealed they stayed late into the night at the betting centres. We had brilliant students who stopped attending school because they wanted quick cash and believed that sports betting will provide the solution', she said.

A parent noted that these facilities provided an avenue for them to watch their favourite International matches but it has taken a different turn which is influencing their children negatively.

'We were all happy when they started but our children are not staying at home to help us in any way as they spend most of the time gambling. I don't know what to do now'', she lamented.

Under the Gaming Act 2006, Act 721, the Gaming Commission of Ghana (GCG) is the main body responsible for regulating, controlling, monitoring and supervising the operations of games of chance in the country. The Commission also has the mandate of licensing casinos and other games of chance.

An official of the Commission who pleaded anonymity told the GNA in an interview that there were rules and guidelines governing the operations of the sports betting facilities in the country, and stressed that any company interested in establishing one would have to comply with those rules to ensure that people engaged in descent and legal gambling.

On the issue of patronage by minors, the GCG official emphasized that as a basic requirement the companies were expected to provide security personnel at the entrance to ensure that minors did not participate.

'We have asked the companies to provide a bouncer who would ensure that children below 18 years don't enter. We have an inspection team that visits the communities quarterly to ensure they do the right thing as far as the guidelines are concerned.

The Commission indicated, however, that the betting companies had not committed any offence by establishing more than one betting facility within any given community, so long as they did not operate contrary to the rules spelt out in the Act.

'We have no problem with more than one sport betting facility located close to each other in a community, except when they operate near a school or do business without a license' the official explained.

He reiterated the Commission's preparedness to prosecute people who violate the rules, but added that like other public institutions the GCG faced some challenges which affected its supervisory function.

Akufo-Addo going to IMF is not victory, it's a day of sadnes...
24 minutes ago