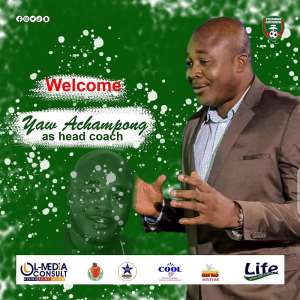 Techiman Eleven Wonders have unveiled veteran gaffer, Yaw Acheampong as their new head coach ahead of the new campaign.

The 47-year-old started last season with Elmina Sharks but left along the way to join the Mauves and Yellows as an assistant to Yaw Preko.

However, the pair were shown the exit after the season due to poor performance.

He is expected to take over the club's preseason sessions from next week in order to realise the ability of everyone heading into the new season including two experience players Abass Mohammed and Isaac Kwain who joined in the just-closed transfer window.

Eleven Wonders managed to survive relegation last season finishing 12th at the end of the season with 42 points.

The club also suffered a round 32 elimination from the league cup and will seek for a better of that in the 2021/22 season.