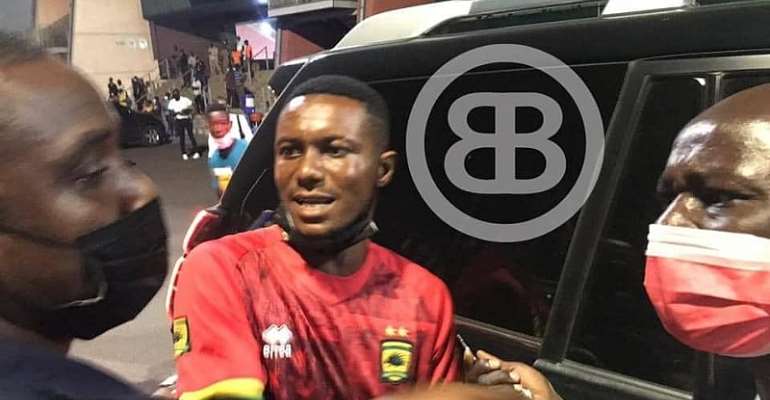 Asante Kotoko have arrested a supporter for wearing a fake Errea replica jersey.

An unnamed fan was arrested after the club’s 1-0 defeat to Aduana Stars on Sunday at the Accra Sports Stadium.

The Porcupine Warriors at the start of the 2020/21 football season announced a lucrative deal with Italian kit manufacturer, Errea.

However, the kits are yet to hit the Ghanaian market. In spite of that, some fans have already laid hands on the ‘fake’ version of the kit.

The club on December 28, 2020, Kotoko in a statement cautioned members of the public in trading or wearing pirated copies of the club’s jersey saying such persons will be prosecuted.

Kotoko in December released a press statement vowing to arrest and prosecute all those behind the ‘illegal production and sale’ of the yet to hit Ghanaian market jersey.

The statement read: "The attention of the Management of Asante Kotoko has been drawn to unauthorised and illegal production and marketing of its Errea replica jerseys by unknown persons. Any persons found wearing or selling the pirated jerseys would be arrested and prosecuted accordingly.

"We entreat supporters not to patronize the said pirated jerseys as they do not emanate from Errea Sports S.p. A; the only authorized entity mandated to produce replica jerseys for the Club

"The original replica jerseys for the Club would be available for purchase on or before 30th January 2021. A notice shall be circulated to the public indicating the availability of the jerseys and the sales outlets as soon as they are ready.”

The arrested fan is currently in police custody assisting with investigations which could lead to possible arrest of many other culprits.