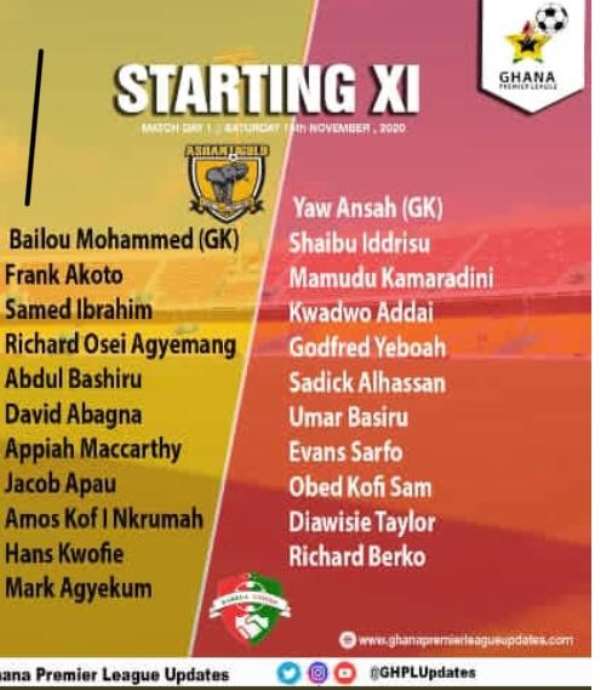 After what had promised to be an entertaining game in the new season of the Ghana premier league in the match week one certainly lived up to the billing specifically the match between Ashanti Gold versus Karela United, which was played in Obuasi (Len clay) on Sunday 15th November, 2020.

The match officials were Gabriel O. Arhin with two assistants, Patrick Papala and Fuseini Mumuni, fourth referee Mohammed Misbau and the match commissioner Augustine Asante. Both had made some decent signings going into the season.

The likes of Hans Kwofie, Stephen Owusu Banahene, Ampem Dacosta, and Stephen Bentil just to mention few were signed by Ashgold and on the other hand, Karela United also had the likes of Umar Bashiru, Saddick Alhassan and the rest just to ameliorate the squad after placing 17th on the truncated league. The Serbian tactician Milovan Cirkovic on the part of Ashgold started with 4-2-3-1, that was, Bailou Mohammed, Frank Akoto, Samed Ibrahim, Richard Osei Agyemang, Abdul Bashiru, David Abagna, Appiah MacCarthy, Amos K. Nkrumah, Hans Kwofie and Mark Agyekum.

This control of the ball in the early part of the game got Karela United their first goal in the 4th minutes through their talisman Diawisie Taylor who found space between the defenders with an exquisite pass from Evans Sarfo which deflected slightly on Richard Osei Agyemang before it got to Diawisie Taylor who took two touches into the penalty box and shot it pass Mohammed Bailou straight into the back of the net with the ball taking a little bit of swerve. Ashgold came in strong to equalize thereby taking the possession with Karela United changing to 4-2-3-1 with only Diawisie Taylor left upfront.

With possession been taken over by David Abagna, Appiah MacCarthy and Mark Agyemang, Ashgold got themselves a free kick some few metres to the eighteen yard box. Appiah MacCarthy got behind the ball, curled it only to be deflected on Umar Bashiru (who turned when jumping) which went staright to the corner with Yaw Ansah doing nothing. That was an equalizer from Ashgold in the 23rd minutes.

As if that was not enough, a quick transition pass to Abdul Bashiru by Appiah MacCarthy winning the ball in their half who saw an out of position Kamaradini and placed a passed to Abdul Bashiru on the left who without much pressure crossed the ball with precision to locate the captain of the day Hans Kwofie who ran between Godfred and Kwadwo Addai to head the ball in the back of the net in the 45th minutes. Ashgold led 2-1 at half time. The second half started with intensity from Ashgold who got a counter attack on the 46th minutes after dispossessing Karela United in the middle.

Good linkage between Appiah MacCarthy and Hans Kwofie who found Amos K. Nkrumah right in the box who tries to curl to the far corner of Yaw Ansah but was deflected to corner kick. On the 51st minutes saw a great save Yaw Ansah who had a one versus one with Jacob Appau after some sweet one –two passes from Ashgold.

Karela United brought in Samuel Ofori who scored on the 59th minutes after a lovely pass from Umar Bashiru to him in the box with his marker closer to him but finds his way to beat Mohammed Bailou (2-2). On the 70th minutes, coach Augustine Evans Adotey seems ti be content with the draw and opted to sit back and hit Ashgold on a counter. He took off Richard Berko and brought in a defender in the shape of Nurudeen Abdulai just to manage the game. It all ended 2-2 with the point being shared.

Coach Evans Adotey will be happy to salvage draw and look forward to their next game which they play against Iner Allies at home. Milovan Cirkovic will be crestfallen with the draw looking at the chances they missed but will take consolation in how they reacted when they conceded the first goal and work on the rest. The Miners will be playing the Phobians away in Accra; we hope to see a thrilling game.

There's no disquiet among us over Akufo-Addo 'luxury' trips,...
15 minutes ago