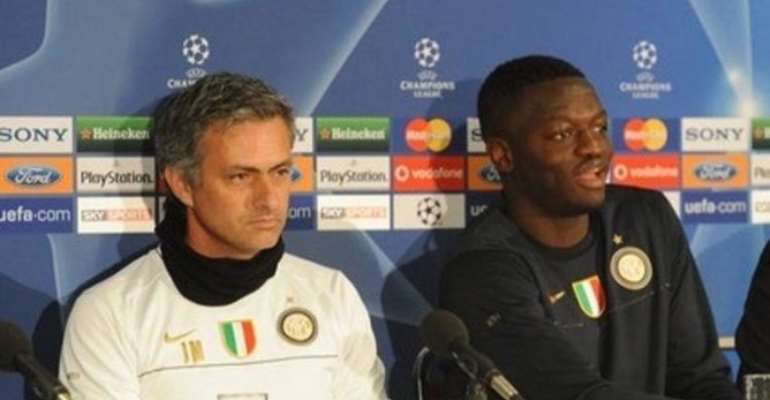 Former Inter Milan midfielder Sulley Muntari has jumped to the defence of former coach Jose Mourinho over the Portuguese’s style of play which has been largely described as ‘negative football’.

Mourinho, currently in charge of Tottenham Hotspur, is widely known for his defensive philosophy, a system during his time as manager of Chelsea and Inter, with whom he won the Champions League in 2010.

Muntari played under the former Real Madrid boss at Inter from 2008 to 2010.

“I really don’t buy it because I know who we are talking about here,” the Black Stars told Metro FM.

“He is the leader and you need to obey what your coach tells you, and that’s what he wants from his side. So if he wants them to defend in a certain way, they have to do it.

“Every coach has his style of play and that’s the way he wants his team to play, that’s his choice.

“For instance, when he was our coach, he didn’t say anything during matches because we know what he wanted. We knew where we wanted to be, we knew we wanted to win trophies.”

Without a doubt, Muntari and Mourinho’s biggest accomplishment together remains the 2010 Champions League success where they beat Bayern Munich 2-0 in the final.

“It was amazing, we still keep in touch as I speak, and we have a chat group which has the squad that won the triple at Inter Milan so we keep in touch,” Muntari said.

“It was always fun around him. He is a very principled man, he is an amazing coach. He gives you all the attention in other to perform. He doesn’t accept if you are not in good shape, you should be in good shape the whole year.

“So that’s what he gets from his players and everybody is loyal to him because he is loyal. He is very amazing.”

Former Udinese and Portsmouth ace Muntari went on to play for AC Milan and Pescara in Italy, Spanish side Deportivo La Coruna and Ittihad in Saudi Arabia after his Inter adventure.

The 35-year-old is currently on the search for a new club since ending a short spell with Spanish second division fold Albacete last year.

You have no authority to banish, kill anyone for being gay; ...
30 minutes ago