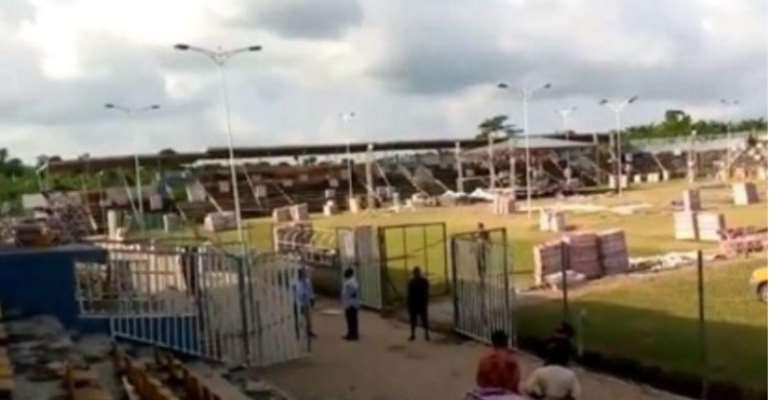 Members of the Asante Kotoko Board, Friday, embarked on a physical inspection of the Anane Stadium at Abrankese near Kuntenase in the Bosomtwe District of Ashanti Region.

The 12,000 capacity facility, Footy-Ghana.com gathers, is being considered by the Porcupines’ directors for use by the team as a temporary training facility when work begins on the Adako-Jachie centre soon.

The Dr. Kwame Kyei-led board has as its foremost task, upgrading Kotoko’s current training centre to one befitting of their status.

At the inauguration of the Board early June, Chief of Staff of the Manhyia Palace, in an address on behalf of life patron and sole owner, the Asantehene Otumfuo Osei Tutu II, stated:

“Your first order is to develop the Adako-Jachie field into the best sports complex in the sub-region to contain a giant soccer academy and the best training facility complete a first-class gym, medical and nutritional and all the auxiliary things needed for such a facility.”

The Kotoko Board, which has had three reinforcements, soaring up the composition to 12 members, held its fourth meeting on Friday. Dr. Kyei, after the meeting, led the board to inspect some key properties of the club – Secretariat, Adako-Jachie Training Centre and one abandoned Club House at Odiom.

After Adako-Jachice, the board proceeded to Abrankese to have firsthand knowledge about the state of the Anane Boateng Stadium which used to be home grounds for Kessben FC (now Medeama SC after a change of ownership). The stadium which was opened in 2007 has almost over the past decade mostly been used for religious activities.

It is understood that the idea of adopting the Abrankese grounds or possibly acquiring it outright came up not long before the new Kotoko board was formed. The facility belongs to former board member Mr. Kwabena Kesse of Kessben Group of Companies fame.