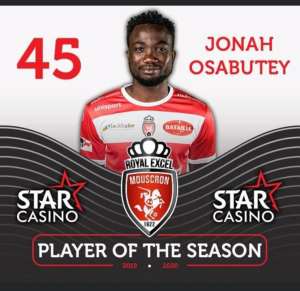 Ghanaian international, Jonah Osabutey has indicated that his ‘Player of the Season' award at Royal Excel Mouscron is a motivation to continue working hard.

Throughout the campaign, he displayed his talent in exciting fashion and scored 5 goals while chipping in with 3 assists on the back of 23 appearances.

Assessing the performance of players at the end of the season, Jonah Osabutey has been voted as the Player of the Season at Royal Excel Mouscron.

In an interview after receiving the honour, the attacker has expressed his delight as he emphasizes that it will push him to continue working hard.

“It feels great to win this special award in my first season here.it is a loan move and I have enjoyed every bit of the atmosphere here”, Jonah Osabutey told Platinum TV.

He added, “Winning the club's player of the season is a huge motivation for me to keep working hard. Thanks to my teammates and the entire squad for the support”.