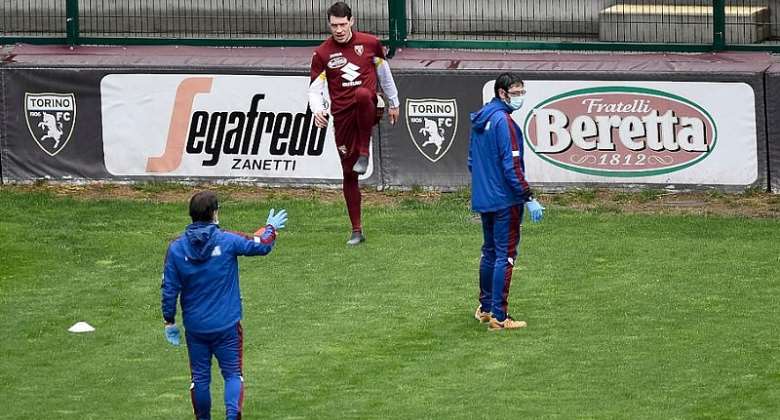 The start of full training at Italy's professional soccer clubs has been postponed from Monday as they continue to wrangle over the government's medical rules for dealing with the coronavirus.

The Gazzetta dello Sport, state broadcaster Rai and other media all said that the government's technical-scientific committee had not ratified the rules which were announced last week but then questioned by the Serie A clubs and the Italian Football Federation (FIGC).

Several clubs had already decided either to continue with individual training or, at the most, divide players into small groups which would respect social distancing measures.

Serie A clubs hope to resume the league, which has been suspended since March 9, on June 13 but have been locked in to-and-fro discussions with the government over how to do so safely.

The main sticking-point is the government's insistence that, if a player tests positive, the whole squad must go into quarantine for 14 days. The clubs argue that isolating the player involved would be sufficient.

"It is obvious that this would not allow us to finish the championship by August because, if there were 2-3 infected in one or two teams, everything would be systematically blocked for a couple of weeks," Cagliari president Tommaso Giulini told Radio Super Sound.

"Since this has a good chance of happening, it would mean that 80 per cent to 90 per cent of us would not be able to finish by August 2... We are trying, we need less rigidity and within the next few days we will know something more."

The clubs are also opposed to the stipulation that each squad, including coaching and backup staff, undergo a training camp in complete isolation before the league restarts. They said this would create huge logistical problems.

Udinese's technical director Pierpaolo Marino said the uncertainty had made the June 13 start date unrealistic and that more training time was needed.

"It would be madness for footballers and clubs," he told Rai.

"We still don't know if from tomorrow we can train in groups or individually, as the current guidelines are not fully applicable. If the league resumes on 13 June, there will be a very high risk of injury.

"The German championship restarted yesterday after seven weeks of training and several players have already been injured."

Earlier, Inter Milan said that the entire squad and staff had given negative results in the most recent round of tests.

"All of the results from Friday's medical tests on the club's players, coaching staff, management staff and the remainder of the team group have returned as negative," the club said.