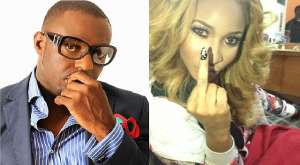 This is very painful and we are about crying for Nollywood actor, Jim Iyke.

That's because it's seven days already since he took part in the ALS Ice Bucket Challenge and nominated Tonto Dikeh...and guess what? Tonto is yet to respond to his call!

That's sad...does it mean his words doesn't hold waters in the industry?

Jim took part in the challenge today Thursday, September 11 and donated to the cause, after which he uploaded the video on his Instagram and wrote;

Tonto and the other two he nominated are yet to respond...

Common PokoLee...you don't wanna fall your brother's hand in public, do you?

EXCLUSIVE: I Am Not Running For Senate In 2015—Yemi Solade Tells Nollywoodgists.com

Efe Omorogbe, Other COSON Directors Use Our Money To Build Houses—African China