From Accra To Kumasi And Back, The Plight Of The Kayayei Under Coronavirus 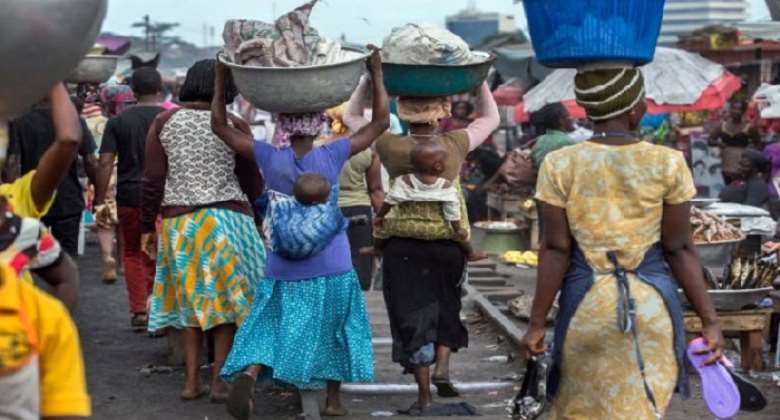 It all started when President Nana Akufo-Addo on Friday (27th March 2020) evening announced restrictions in movements in some urban areas of the country. The lockdown was to start from Monday 30th of March and was expected to last the next two weeks. The move was part of efforts to control the spread of the Coronavirus.

The flu causing virus had announced its presence in Ghana on the 12 of March with two confirmed cases in the Greater Accra Region. By the time of the President's announcement of a lockdown, the virus had killed four persons, infected over one hundred persons across six regions of the country.

Hours before the lockdown, female head porters, popularly referred to as ‘Kayayei’, who travelled to cities in southern Ghana from the northern parts of the country in search of non-existing jobs, decided to travel back home.

A toad, they say does not run in daylight for anything. Coronavirus has claimed lives all over the world, the rich, poor, black and white, all suffered death in the hands of coronavirus. The development created considerable fear and panic across the world, and kaayayes, one of Ghana's most vulnerable groups, were no exception.

According to available data, Accra, Tema, Kasoa, and Kumasi, have recorded significant numbers of infections. Our elders say it is only a fool who does not change his/her mind. Since there was no immediate ban on traveling between the day of the announcement and midnight of Monday 30th March 2020, everyone could travel out from the four cities. It was therefore not surprising to see a lot of the kayayei leaving Accra, Tema, Kasoa and Kumasi where they render their services. Although I disagree with those who argue there was nothing wrong with the state allowing people to leave.

Several news outlets reported of the arrest of tracks loaded with kayayei heading to the north. One of such reports claimed “About 171 head porters, popularly known as ‘kayayei’, who were disguised as cargo, have been intercepted by the Nkawkaw District Police Command”

Meanwhile Municipal Chief Executive for Ejisu, Beatrice Serwaa Derkyi has directed the police to send the trucks with all passengers on board back to Accra.“If the cars are coming, you should stop them for them to go back to Accra or wherever they are coming from but they [the two cargo trucks] have been able to cross Ejisu,” reported by another portal.

I wonder why an appointee of the state will decide that Kayayei be returned in the same cargo track with their children. Two wrongs they say do not make a right.

In desperation, Kayayes opted to travel in cargo tracks meant for transporting foodstuffs and animals.

According to them, there were not enough buses to send them to their home towns although they had paid. The Municipal Chief Executive had many options and resources under her disposal which she could have used to support these poor girls and their children.

According to government officials, over 1,030 Ghanaians who travelled to foreign countries and returned on the 12th of March were quarantined in the best hotels in Ghana. Most of these people came in first-class, others in economy class yet the state did not ask that they foot their bills. Why? Because it is in the best interest of the good people of Ghana.

My worry is that the state hosted these well-to-do 1,030 Ghanaians because the state wants to prevent the spread of the virus yet the same state could not provide a means of transport to send these poor girls back to their home towns.

Couldn’t the MCE have asked to be quarantined in a hostel, primary or any of the numerous secondary schools within her jurisdiction? They could have been sent to their destinations with security escort without this humiliation they were subjected to.

If we think they were going to spread the virus in their villages or in Ejisu, we could have housed them in schools while in their villages for the 14 days mandatory quarantine with the support of their respective District Assemblies through the department of Social Welfare providing needed support before they are made to rejoin their families after testing them just as we did to the 1030 Ghanaians.

If there is anything Coronavirus has thought us as a people it is the fact that, we are all equal.

There is no animal farm when it comes to coronavirus. The poor, the rich, the Prime Ministers, Prince, Minsters, and Prophets etc have been infected while some have passed on.

Move all homeless people to the schools.

The idea to provide “one hot meal” to the poor including the kayayei who were returned to Accra is a laudable one. However, watching them on TV makes me wonder whether we are serious as a people. What are the schools (Junior and Senior High) for? Can’t we move them to the schools? Yes, a place has been created for the kayayei to help them observe social distancing. What of the general homeless or even those living in slums. There are lots of people who are homeless, should the virus spread to any of these street dwellers then we are in serious trouble as a nation.

That is why I hold the view that housing all the homeless in our schools and providing them with food is the appropriate thing to do now. There is a need to make use of social workers in the operations. For Social workers are trained to handle psychosocial needs and contact tracing.

Medical Social Workers in Ghana have played this role judiciously and are prepared to bring their expertise to bear in this challenging moment of our time.

Let us handle the poor as we have done to the “rich” through whom we got coronavirus into the country. Discriminating against the poor at this very moment is dangerous and can escalate the infection rate if the spread gets to the street.

Remember with coronavirus, there is neither rich nor poor, minister or laborer, military general or watchman we are all vulnerable. Let us stay home or help the homeless to get a place to stay so that our campaign on stay home can materialize.