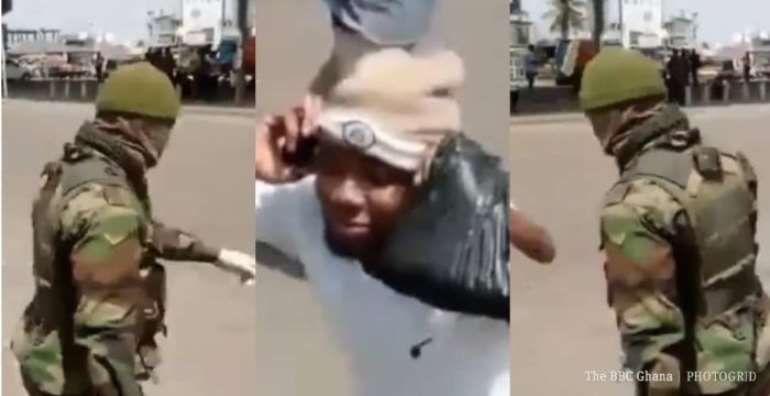 Few days into the partial lockdown of the Greater Accra, Kumasi and Tema has affirmed the exclamation mark that the Ghanaian security personnel are not ready to change from their antiquated methods of enforcing law and order in the country. There have been several reports in the media on the use of brute force by some security personnel on civilians who broke the lockdown orders.

In an interview with a radio station in Accra, a nurse (name withheld) recounted how some police at a checkpoint along the Kasoa-Accra road ordered a passenger van back to Kasoa regardless of the presence of essential service providers in the vehicle. Identity cards shown by the nurse buttressed with incessant pleading were not enough to be allowed to go to work and save lives for which this very lockdown was imposed.

Other videos which went viral on social media revealed how some security officers inflicted dehumanizing punishments such as squatting, crawling, slapping amidst verbal assaults on poor civilians deemed to have broken the lockdown rules. The case of a 63-year-old widow who was manhandled by strong and merciless security men for going out to buy food tells it all.

The conduct of some of these security personnels have triggered some five Non-Governmental Organizations (NGOs) to call on government to "call the security operatives to order and stop them from brutalizing citizens including women and children whom they are to protect". These NGOs include Global Coalition against Infectious Diseases, Global Media Foundation, World Evangelical Alliance Business Coalition Ghana, Indigenous Women Empowerment Network and Citizen Watch Ghana.

The Commission for Human Rights and Administrative Justice(CHRAJ) in a press release on 2nd April, 2020, signed by the Commissioner, Mr. Joseph Whittal, advised the security taskforce to exercise restraint in dealing offenders of the lockdown rules and ensure that their human dignity is not curtailed as enshrined in Article 15(2) of our Constitution. The statement further advised the high command of the security services " to take the necessary steps to strengthen the professional standards and behaviour of the security personnel to ensure that they operate within the ambit of the Constitution".

Again, the content of their curriculum should also be reviewed to include Sociology, Psychology, Work ethics and Education and Law. Much emphasis should be placed on cognitive training because their training over the years has been too physical which make them tend to unleash these physicalities on poor civilians.

It seems security personnel who break the law are usually softly dealt with, in many instances, let off the hook. It was, therefore, not surprising that Brigadier General Yeboah Nsiah, the Commanding Officer of the Southern Command of the Ghana Armed Forces, vehemently denied in CitiNews the assault cases levelled against his men. This seem to spur them on with their atrocities with impunity. It is about time leadership stopped shielding personnel and made them face the music for their offences. This would forestall the long lost confidence civilians had in them.

If teachers are banned from caning pupils in Ghanaian schools, then why are Ghanaian leaders loudly silent on these brutalities visited on civilians by our security personnel?