Why I Have Confidence In Joel Savage Than Any Ghanaian Writer 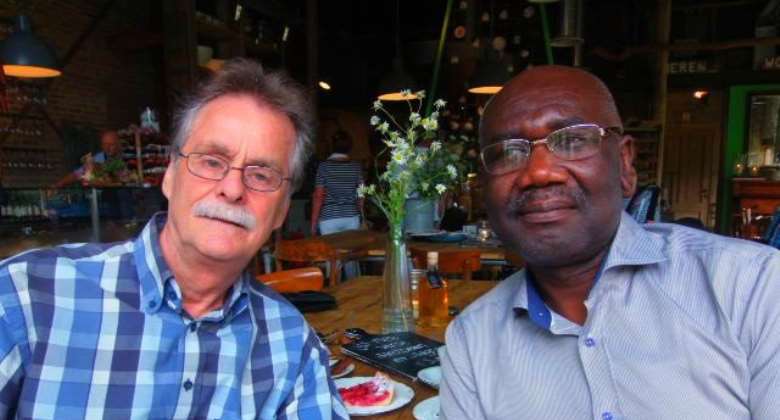 Some trust in chariots, in horses, guns, and others in money but apart from the creator of the universe, whom I don’t see and my wife, who has been with me throughout my happiness and pain, as a scientist, the next person, I will always trust and believe in him is the Ghanaian writer called Joel Savage. This article will unfold the reason.

Education is the action of developing a body of knowledge, moral, physical, intellectual, and scientific values, however, it doesn’t matter to be a president, an engineer, a professor at the university, a journalist, a pilot or whatever profession, what matters most is the moment you are on this earth, what you achieved and the legacies you left behind, after your departure from the surface of this earth.

“Everyone wants to go up to heaven but nobody wants to die,” this is a statement often made by Joel Savage, and I asked my friend about it and he told me that it is part of a lyrics of a song by a Jamaican reggae star, called Peter Tosh. That short statement has an enormous truth.

It was during the time I needed an African journalist most to help spread the message that actually, no primates, mammals or any monkey or bats are responsible for Aids and Ebola but they were engineered by the US government as biological weapons, I clearly understood that in this world, you will always stand alone and lose all your friends when you follow the truth.

This is what many fear will happen to them and it’s one of the reasons that there is no truth in this world. The world now lies in the hands of the devil or Satan, which are real human beings. The superpowers, the liars and destroyers of the world, will deny the poor money and everything that makes life comfortable, so that the poor, often called the third world, will follow their devilish activities.

After losing my job, as a lecturer at the University of Maastricht, Holland, just because I have written two books to tell the world that Aids and Ebola are biological weapons by the US government to take control of Africa’s resources, reduce the population and destabilize the continent’s economy, that wasn’t strong enough to prevent me from looking for a genuine and brave African journalist to spread the message.

I don’t find it only a shame but the biggest crime against humanity for the US government, the World Health Organization (WHO) and the Centers for Disease Control (CDC) to tell such lies that monkeys brought from the Philippines to the United States were responsible for Aids and bats are responsible for Ebola, while the two diseases were man-made.

It’s even more dangerous to the world that we are still working with the same World Health Organization, Centers for Disease Control and the US government, those responsible for heinous medical crimes against humanity.

I am not going to tell you or the world of what it is at the moment because; sometimes, it doesn’t even worth sacrificing your precious time or life for ungrateful human beings. Some Africans, including Ghanaians, are really ungrateful.

These Africans, often show their cruelty fighting and killing one another but behind that bloodshed and unnecessary violence is a pure cowardness, meanwhile, African leaders continue to promote and support the lies of WHO, CDC, and the American government, yet, they claim cared about the suffering masses.

I nearly gave up in my search for an African journalist or writer, until one day, whether it’s a miracle or by chance, I stumbled upon an article about an African writer living in Antwerp, Belgium.

The article reveals about the first African journalist to go into the establishment of the Stuivenberg Hospital in Antwerp, to investigate the high abnormal death rate of Africans that visit the hospital. Later, I got to know from the writer that some Albanians also demonstrated in Antwerp against the same accusation.

I thought this was an opportunity to meet this writer. Luckily enough, he was also a member of one of the biggest and prudential social media, LinkedIn. I tried my best to see Joel Savage and every necessary arrangement was made to meet me in Holland and it went through.

When we met, the first question I asked him was: How on earth did you enter Stuivenberg Hospital for such an investigation?

I will never forget the answer he gave me, "If a country like Belgium can commit such a heinous crime against humanity in Africa, yet build statues and named streets after the perpetrator, King Leopold II, then you must believe what some of the Africans are saying that the hospital deliberately kill them for their body parts."

From slavery to Apartheid and colonialism, many European countries and the United States of America have committed serious crimes in Africa with impunity, yet they hate any intelligent African journalists or writers who try to investigate them.

People should, therefore, understand why many hate this brave writer, Mr. Savage, even though he hasn’t committed any crime.

It wasn’t long, when a medical doctor, who appeared to be the writer of the book “Aids, Origin, Spread, And Healing,” the German Dr. Wolff Geisler, also saw Joel Savage’s work and quickly invited him to Cologne in Germany.

It was through Dr. Wolff Geisler, Mr. Savage deeply believed in my research that Aids and Ebola are indeed biological weapons by the US government after Dr. Geisler also gave Mr. Savage vital documents pertaining to the same medical crimes.

Mr. Savage then quickly called me at the residence of Dr. Geisler to get the opportunity to talk with this man I have read his book but never communicated with him.

After joining the ModernGhana news columnists, Mr. Savage continued persuading me to join as well and I obliged because he also agreed to work with me.

American leaders, such as Barack Obama and the Microsoft founder, Bill Gates, continue to praise African journalists fighting and exposing their leaders in corruption scandals, yet they are not interested in African journalists who expose the evil they do in Africa, do you call that a wonderful or beautiful world?

Politics, like always, full of lies and hypocrisy but what goes around always comes around, unfortunately, the poor masses are those that receive the wages of the crime committed by their leaders.

Sometimes, we just have to let things go, but before they go, we must give the truth a chance in whatever we do. The truth must find its foundation in Africa, through the leaders the suffering people vote for, yes, without the people's vote, there will not be any leader.

I issued a challenge to the US government, the World Health Organization and the Centers for Disease Control last year, if they are brave, they must prove me wrong if Aids and Ebola are not biological weapons or simple twist their tail under their belly like a scared coward dog and shut up.

I can’t give respect or honor to liars or killers in white-collar suits, except my only friend, Joel Savage, who will remain my friend forever because he has a genuine heart that takes the suffering of Africans into consideration. If you can’t be him, please, don’t be jealous.