The African clawed frog can be found on five continents. And it doesn't travel alone

By Anneke Lincoln Schoeman - The Conversation 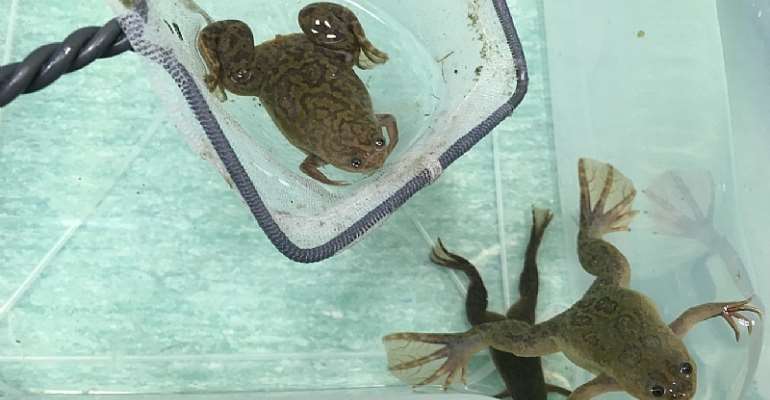 African clawed frogs are very easy to keep in the lab.They were readily adopted by scientists as a model research animal. - Source: Author supplied

The first description of the African clawed frog by Western naturalists was made in the early 1800s. Even back then scientists could immediately see that it was special . No one had seen anything like it before. It sported black claws on the hind legs, sensory organs on its sides (like a fish) and upward-facing eyes.

How did an odd-looking southern African frog become a denizen of the world? According to Sir John Gurdon, a Nobel Prize-winning scientist who dedicated his career to African clawed frog research, it has to do with a fortuitous combination of the

specific histories of empire and of endocrinology.

The African clawed frog has morphed into an antihero of sorts. It's very successful as an invasive species: each of its feral populations across five continents has a unique invasion history. It's clear that they are capable of surviving in very different environmental conditions.

That's why we chose this odd amphibian for our study into whether the frogs keep, discard or attract new parasites in their new environments. We looked at 20 invasive and 27 native sites in five countries and on three continents.

Our comparisons resulted in some fascinating and previously unknown insights. We confirmed that the frog lost some parasites during its travels, which partly explains its phenomenal success at establishing new populations. But we also found that some parasites remained tenaciously loyal, staying with the amphibian through multiple geographic changes and becoming invasive species themselves.

Knowing what makes invasive animals and plants successful is an important step in understanding how to mitigate their impact .

The story starts in Cape Town, South Africa, with a pregnancy test. One of the oddities of the African clawed frog is that it can reliably detect pregnancy when it is injected with a woman's urine. If the woman is pregnant, the injected female frog will start laying eggs within 18 hours.

Hence the choice of the African clawed frog as the world's very first rapid pregnancy test in the 1930s.

With it came a plethora of research, catapulting this frog into the top spot as the most widely used model amphibian . Breeding facilities sprang up everywhere and unique mutants – such as the albino variety in China – served both as model animals in research and as pets .

But every success story has a dark side. Frogs escaped from breeding facilities and invaded regions with a Mediterranean climate. Today, the African clawed frog is a model invader in Japan, Chile, the USA and France, among others. This polystome worm, called Protopolystoma xenopodis, is one of the most common accompanying parasites of the African clawed frog. It was found in Portugal, France, California and the United Kingdom. Author supplied

Its invasiveness is an ecological tragedy. But its worldwide distribution can be seen as a natural experiment of sorts. It is perfect for testing long-standing theories , similar to how a scientist would test a theory in the lab.

Parasites lost, but is that all?

The idea that an animal invading a new environment will have fewer natural enemies, such as parasites, is intuitive. Yet we simply don't have the scientific evidence to make that claim. Our study provides some.

Every time the African clawed frog invades a new area, most of its parasites are left behind. Most – but not all.

First, a note about the hypothesis we used. The Enemy Release Hypothesis proposes that an animal in a new environment will thrive because it has left some or all of its natural enemies behind. These include predators, pathogens and parasites.

This might seem logical, but the idea is not really backed up by evidence. Loss of parasites in invading frogs, for example, has been investigated only twice (in Puerto Rican and Cuban tree frogs) and only in Central America. We simply don't know for sure whether parasite loss will happen every time a frog invades a new environment.

Our results confirm the long-standing suspicion held by biologists. This frog always has fewer kinds of parasites in the invasive populations in Europe or America than it has in its native Africa.

On top of this, a smaller proportion of frogs are infected with parasites in the invasive range than their counterparts in Africa. So these invasive frogs are relieved of many of their natural enemies. And even with the enemies that remain, their encounters are less frequent. This means that they can allocate more resources to producing the next generation and invading new territories.

But having fewer parasites is not the same as having none at all.

We realised that there isn't just one global invader in this story, but three.

We noticed that two kinds of parasites, namely a polystome and a tapeworm , almost never lose sight of the African clawed frog, no matter where it travels. These parasites are invaders in their own right.

Part of their life cycles takes place outside the frog, in streams and ponds. Here, they come into contact with other creatures and are capable of altering living conditions too.

Parasites as invaders slip under the radar. Yet pathogens and parasites are some of the biggest killers of frogs worldwide.

Yes, the African clawed frog is a notorious invader. But we shouldn't lose sight of its two loyal parasites and the damage they can do.