By Sofia Christensen and Africa bureaux 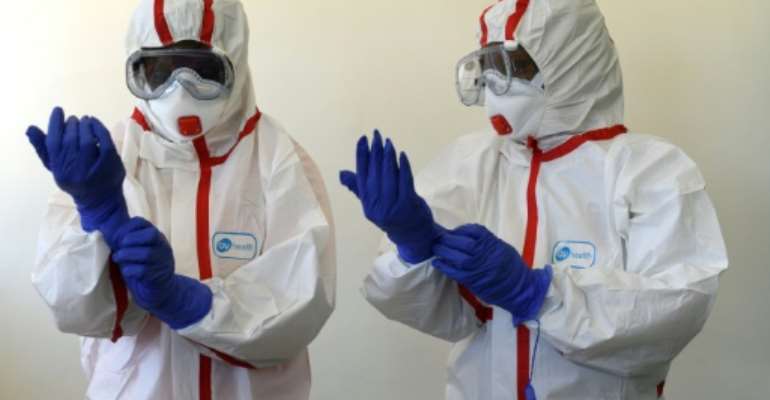 After escaping mostly unscathed by the coronavirus pandemic, sub-Saharan Africa is bracing for the worst after its first outbreaks of the illness that has already engulfed China and Italy and spread to other parts of the globe.

The region maintains one of the lowest rates of confirmed infections in the world, despite strong links to Europe and China -- the original epicentre of the pandemic.

Coronavirus has so far only been reported in thirteen sub-Saharan African countries and no deaths have yet been recorded.

Almost all of the region's 170-odd cases contracted COVID-19 abroad.

But African leaders are now preparing for the outbreak to spread as doctors and experts fear it could only be a matter of time before the virus spirals out of control.

South Africa's President Cyril Ramaphosa warned the outbreak could turn into a "national crisis" after the country confirmed its first case earlier this month. 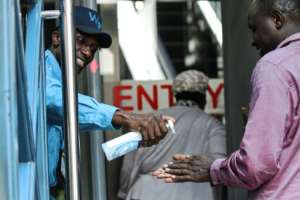 A security guard gives hand disinfectant for visitors to building in Nairobi, Kenya as eastern Africa reports its first cases. By - (AFP)

"We are going to be hit badly," said Kenya's tourism minister Najib Balala, who has set aside 500 million Kenyan Shillings ($4.9 million) for a "post-coronavirus" marketing campaign.

More than 130,000 people have been infected and 5,000 killed by the novel virus since it was first detected in the Chinese city of Wuhan late last year.

Across the globe, governments have imposed travel restrictions and closed schools to help prevent the spread and world stock markets have plunged.

After a slow start, the number of coronavirus cases in Africa is creeping up.

A Kenyan national tested positive for the virus this week after returning from the United States via London, bringing the first case of COVID-19 to East Africa. 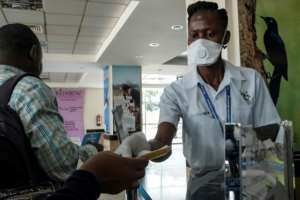 Guinea also detected its first case in a Belgian woman who recently arrived to the country.

Five more people tested positive in Senegal, the worst-affected country in West Africa. All were family members of a man who is normally resident in Italy.

Several African countries have been rolling out measures to prevent further contamination.

Conferences, sporting events and concerts are being suspended one after the other.

Kenya has temporarily banned major public gatherings and prison visits and stopped its national airline from flying to Rome.

South Sudan suspended all direct flights to affected countries and Gabon is denying access to travellers coming from China, Italy and South Korea.

In Rwanda, washing basins with soap and sanitiser have been placed on streets for commuters to use before boarding buses.

Some schools were temporarily closed in Chad and Gabon.

Places of worship have remained open for the time being, as well as most restaurants, bars and entertainment precincts.

"We are at this very early phase where it is critically important that we contain the virus," said Richard Friedland, head of South Africa's largest private healthcare provider Netcare.

"The key issue is with people living in informal settlements, in shacks... that (are) very difficult to self isolate," he told AFP, warning that a spread to such areas could be "catastrophic" for the continent. 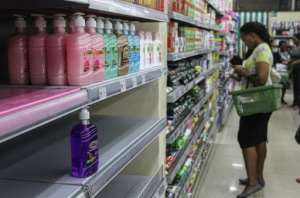 News of the first case in Kenya sent middle-class shoppers hunting for supplies. By - (AFP)

To date South Africa is the only country in the region that has agreed to repatriate citizens from Wuhan, which has been placed under lockdown.

More than 120 South Africans are expected to fly back to the country this weekend. All will be quarantined in a remote resort before being allowed to rejoin their families.

South Africa, which has not yet imposed any restrictions, has detected 24 cases of coronavirus -- the highest in sub-Saharan Africa.

"There is currently no evidence to suggest that COVID-19 is widely circulating in the community," said South Africa's National Institute for Communicable Diseases.

"However, based on the experience in other parts of the world it is highly likely that the status of COVID-19 transmission will change."

The World Health Organization and the African Union's Centres for Disease Control have trained health workers and equiped more than 40 laboratories to test for the virus.

Some experts believe West Africa could also benefit from experience acquired by tackling the 2014-2016 Ebola outbreak, which killed some 11,300 people.

But many countries on the continent are already crippled by ailing medical facilities and struggle to deliver basic healthcare.

"The system itself is overstretched and inadequate to deal with a coronavirus epidemic," said Zimbabwean doctor Norman Matara.

He told AFP there were only eight functioning intensive care and two isolation units in the whole of Zimbabwe.

"In the event of an epidemic, these are not enough to cater for all the country's ten provinces," Matara explained, adding that testing capacities were limited as materials were being kept in two cities.

Some have started preparing for the worst. In Kenya's capital Nairobi, panicked residents rushed to supermarkets after the first case was announced to stock their pantries.

"I call on all my African colleagues to act together," tweeted Senegal's President Macky Sall on Friday.

"Africa must not turn into a new hotbed for the illness."

Your Petition Is Opportunistic, Populist; We’re Already Prob...
1 hour ago