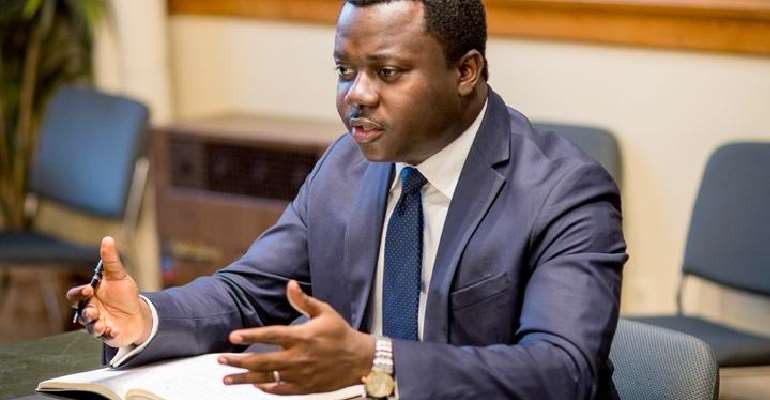 The Member of Parliament for the Assin South Constituency, Hon. John Ntim Fordjour has implored parliament to, as a matter of urgency, open an inquiry into the Airbus Bribery Scandal allegedly involving some Ghanaian government officials in the Military Aircraft Deal.

According to him, the highly reputed name of Ghana has been stained and brought into discredit against the background of the 31st of January, 2020, publication of rulings made by the Crown Court at Southwark, in the United Kingdom, between the Director of the Serious Fraud Office and Airbus SE.

The European multinational aerospace corporation had been fined the sum of $3.9 billion for the payment of bribes to secure deals in five countries, including Ghana.

He was addressing Parliament on the floor on Friday.

"In corroboration of the same case, reference was made to the indictment of some Ghanaian officials who allegedly were recipients of bribes admitted by Airbus SE to have paid, as contained in the Deferred Prosecution Agreement of the United States District Court for the District of Columbia, published on the 31st of January 2020; the case involving the United States of America versus Airbus SE," he said.

Here is the full address of the Assin South MP

Mr. Speaker, thank you very much for the privilege of audience to make this important statement expatiating the urgent need for Parliamentary Inquiry into the Airbus SE bribery scandal allegedly involving Ghana Government officials in the Military Aircraft Deal, which has become a matter of serious concern by the general public and in particular, the good people of Assin South Constituency, whom I humbly represent.

The highly reputed name of our beloved country Ghana was in no doubt brought into discredit on the 31st of January, 2020, following publication of rulings made by the Crown Court at Southwark, in the United Kingdom, between the Director of the Serious Fraud Office and Airbus SE, in which the European multinational aerospace corporation had been fined the sum of $3.9 billion for the payment of bribes to secure deals in five countries, including Ghana. In corroboration of the same case, reference was made to the indictment of some Ghanaian officials who allegedly were recipients of bribes admitted by Airbus SE to have paid, as contained in the Deferred Prosecution Agreement of the United States District Court for the District of Columbia, published on the 31st of January 2020; the case involving the United States of America versus Airbus SE.

Mr. Speaker, the rather disturbing revelations contained in the Deferred Prosecution Agreement and Statement of Facts on the case reveal inter alia that, some officials of Airbus SE between 2009 and 2015 made or promised success based commission payments of approximately five million euros to Intermediary 5, who is alleged to be a close relative of a high ranking elected Ghanaian Government official (Government Official 1). Furthermore, Government Official 1 was said to be a key decision maker in respect of Government of Ghana aircraft orders. The Statement of Facts further revealed that the payments to Intermediary 5 by officials of Airbus SE were thus, intended to induce or reward improper favor by Government Official 1 over the purchase of three (3) C-295 military transport aircraft and that out of the five million euros promised Intermediary 5, 3.85 million euros was paid between March 2012 and February 2014.

Similarly, facts presented by the United States Department of Justice to the District Court for the District of Columbia stated that “Individual 1” who was alleged to be an elected Ghanaian government official who was in office from 2009 to 2016, made direct contact with the management of Airbus SE in respect of the purchase of the aircraft a few months after he took office. Mr Speaker, let me crave your indulgence to refer to a statement contained in the Deferred Prosecution Agreement which mentioned the role Parliament played in approving the purchase of the aircraft:

Mr. Speaker, the House may recall that in the exercise of the Constitutional mandate of the Parliament of Ghana as stipulated in Article 75 and Article 181 of the 1992 Constitution, during a sitting of the 6th Parliament, on July 20, 2011 the Chairman for the Parliamentary Select Committee on Finance moved the House for an adoption of the Reports of the Joint Committee on Finance/Defence and Interior on the:

Financing agreement between the Government of the Republic of Ghana and Brazilian Development Bank (BNDES) for an amount of $105,370,177.09 to finance the purchase of one (1) Embraer 190 Aircraft integrated logistics support and the construction of one (1) Hangar for the Ghana Armed Forces.

Credit Agreement between the Government of Ghana and the Deutsche Bank Sociedad Anonima Espanola (Spain) for an amount of (€60,034,636.00) for the Ghana Armed Forces.

Credit Agreement between the Government of Ghana and the Fidelity Bank Ghana Limited for an amount of (€11,750,000.00) (Ghana Cedis equivalent) to finance the Acquisition of two (2) DA 42 MMP Guardian Surveillance Aircraft for the Ghana Armed Forces.

During the debate of the motion, the Hansard accurately captures the consistent cautions and suspicion of impropriety in respect of both the acquisition procedure and financial transaction that were strongly and unequivocally expressed by the Minority in Parliament and in particular, the tenable arguments put forth by the Honorable Member for Suame, Hon Osei Kyei-Mensah-Bonsu, the then Minority Leader, describing the process of acquisition as unacceptable.

Mr. Speaker, I crave your indulgence to make specific reference to the Hansard, brief portions of some of the arguments cogently advanced by the Honourable Member for Suame, Hon Osei Kyei-Mensah-Bonsu in respect of the Airbus SE military aircraft deal on July 20, 2011;

Mr. Speaker, it is on record that the NPP Minority Group at the time, assertively opposed the motion, on the grounds of potential financial impropriety, cost inflation, and disregard for value for money considerations, on the part of the Government Officials who spearheaded the procurement of Embraer 190 from Brazil and CASA 295 from Spain.

Mr. Speaker, despite the bold cautions and misgivings raised by the NPP Minority pointing to potential financial impropriety, cost inflation, and disregard for value for money considerations associated with the acquisition of the military aircraft, the NDC Majority overwhelmingly debated in favor of the motion and eventually got the agreements ratified.

Unrelentingly, the NPP Minority Caucus, led by the venerable legislator Hon Osei Kyei-Mensah-Bonsu, the then Minority Leader and currently the Majority Leader of Parliament, on July 22, 2011, barely two (2) days upon the majoritarian parliamentary approval of the motion that culminated in the purchase of Embraer 190 and CASA 295, held a press conference on the ‘Procurement of five (5) Aircraft and one Hangar by the Ministry of Defence’ and expatiated on the stance the Minority Group took during the debate preceding the parliamentary approval of the five (5) aircraft.

Again Mr. Speaker, for the purpose of precision, respectfully indulge me to refer to some specific statements which found expression in the NPP Minority’s press conference on July 22, 2011:

“…Our worry and complaint is in respect of the pricing for the Embraer 190 and CASA 295. We proceed to demonstrate what we consider to be astronomical and incredible over invoicing or inflation... Notably the total basic purchase price of the Embraer 190 together with the cost of one (1) Hangar does not add up to the loan amount of $105,370.177.09. There is an unaccountable difference of $4,270,179. The question is what accounts for the difference?” (Page 3)

“It is therefore noteworthy that a diligent research undertaken by members of the Minority Group revealed that the prices of the Aircraft, in particular, that of the Embraer 190 from Brazil and CASA 295 from Spain had ridiculously been increased or inflated. The world market unit cost of a new Embraer 190 for the year 2011 is $35 million approximately as opposed to the unit price of $55,264,000 proffered by Atta Mills/Mahama administration; and, with regard to the CASA 295, the world market unit cost of a new one is $22 million approximately as compared to the cost of €24,522,000 proposed by the Atta Mills/Mahama led administration. The question to be asked is what is the basis of this inexplicable difference in the unit price cost price between the world market and the prices proffered by the Ministry of Defence? A thorough search at website further indicates that there is no disclaimer in relation to that $32 million standard unit price quoted on the website.” (page 4)

Nearly a decade afterwards, the tenable misgivings raised by the NPP Minority at the time, which were utterly glossed over, have proven beyond all reasonable doubts, to hold substance at the judgment proffered by the UK and USA Courts, which reference is aforementioned. The Parliament of Ghana as an institution, ought to be seen as a strong and effective arm of government that exercises credible oversight over the executive, holding the executive and government officials past or present, accountable for their actions and inactions, particularly in circumstances where such actions and inactions hold serious repercussions for the country.

Mr. Speaker, I take serious view of the judgment passed by the Crown Court, Southwark in the UK and the Deferred Prosecution Agreement by the United States District Court for the District of Columbia in which Airbus SE is alleged to have admitted to paying bribes to some Ghanaian Government officials following an agreement duly ratified by the House. The judgment is of serious concern to the people of Assin South Constituency and the general public who strongly abhor bribery and corruption as a phenomenon.

To my mind, it must equally be of great concern to the House to invoke its accountability and oversight powers to initiate a well-coordinated inquiry into naming and shaming the few miscreants who may have been shielded as Government Official 1, Individual 1, Intermediary 5 as well as any other persons culpable within our jurisdiction, relative to the infamous Airbus SE bribery scandal which is fast threatening to erode the good name of the Republic of Ghana, if fast remedial actions are not taken.

Without prejudice to the outcome of the Parliamentary Inquiry which I so propose, if it is determined upon the Inquiry that no complicity exists on the part of the persons so referred to in the judgment of the Crown Court, UK and the Deferred Prosecution Agreement by the United States District Court for the District of Columbia, the name of Ghanaian government officials in general, past or present, would have been effectively purged.

On the other hand, if complicity is established on the part of any such persons, the law of the Republic of Ghana would take its course accordingly, and in either way, the confidence reposed in the Parliament of Ghana as an independent, credible institution which upholds the values of probity, accountability, transparency and integrity, would have been well and truly consolidated.

In conclusion, Mr. Speaker, with due regard for the diligent commitment exhibited by President Akufo-Addo in respect of the judgment by the UK and USA courts in relation to the Airbus SE bribery scandal, as demonstrated by promptly charging the Office of the Special Prosecutor to collaborate with its UK counterpart to conduct inquiry into determining the complicity or otherwise of any Ghanaian government official, past or present and to take the necessary action required by Ghanaian law, I, in the spirit of patriotism, do accordingly implore the House to explore our legitimate option fortified by Order 191 of the Standing Orders of the Parliament of Ghana, to conduct inquiry into the matter, as an independent institution, to establish complicity or otherwise of Ghanaian government officials, past or present, relative to this Airbus bribery scandal.

Thank you, Mr. Speaker, I am indeed grateful.