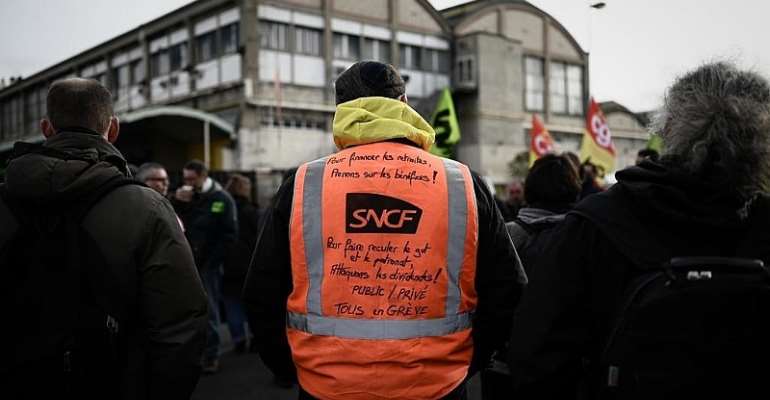 The French rail company is under fire for paying handsome bonuses to employees who refused to join the national strike against pension reform. Commuters affected by the strikes are entitled to compensation. But on Friday, the website for them to claim a refund crashed within hours of its launch.

"In the battle against pension reform, bosses are using company means to serve government policy. And afterwards, we're told off for being partisan," Laurent Brun, secretary general of the hard-left CGT union tweeted on Thursday.

The controversy erupted after a CGT union member tweeted that state operator SNCF had awarded non-strikers a bonus of between 300 to 1500 euros.

In his tweet, Berenger Cernon copied a letter sent to him by a rail worker who was awarded "an exceptional bonus of 500 euros" on his January pay to thank him for his "professionalism and availability".

The worker in question is said to have donated his bonus to a strike fund donation.

Dirty tricks
Left unions have slammed the bonuses as an "illegal and discriminatory practice" and are threatening to take legal action.

France's New Anti-Capitalist Party condemned what it called "dirty tricks" and pledged its support to the RATP and SNCF workers.

The industrial action that began on 5 December has petered out in recent weeks although another inter union demonstration is planned for next Thursday 6 February.

Public transport has more or less returned to normal and the head of the RATP operator Catherine Guillouard announced this week that the unending strike is “behind us."

Faulty refund site
Unions may have something to say about that, and for Paris commuters affected by the travel chaos, they are still waiting for compensation.

A website for them to claim a refund on their transport costs for December crashed  within hours of its launch on Friday, leaving many users frustrated.

Meanwhile the hunt to find the necessary funds to pay for France's new pension system continues, with talks on Thursday between unions and government ministers.

They have three months to balance the books and meet President Emmanuel Macron's plea to streamline the country's pension systems and rules into a universal pension.