Seal The Hole On The Road In front Of CHRAJ: An Open Letter To The AMA Boss 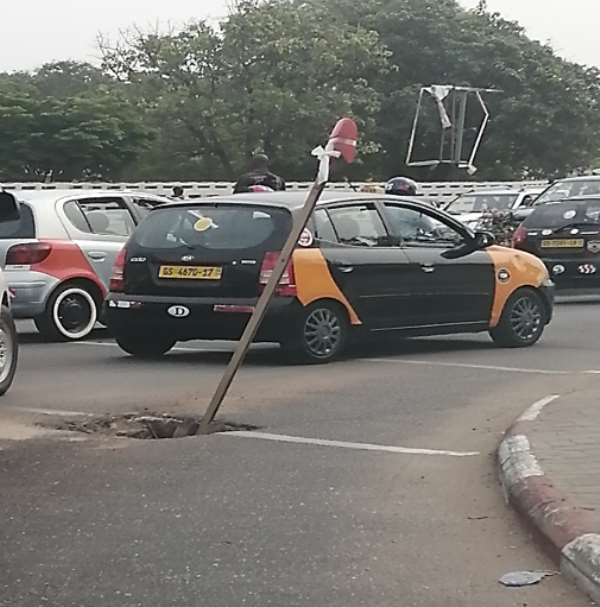 Dear Hon. Mohammed Adjei Sowah, AMA Boss
Admittedly, Mr. Sowah, I have been very hesitant in writing this letter to you, mindful of the reality that your office is just a stone throw from CHRAJ where the problem of concern is and due to the fact that your city guards (Abaayie) are normally directing traffic in the area. Even yesterday I saw the Abaayie at that spot. The essence of this open letter is not to dis you but to draw your attention to the problem.

What then is the problem? The problem is this, that for about two (2) weeks now, there is a part of the road (JEA Mills High Street) that has caved in right in front of Commission on Human Rights and Administrative Justice (CHRAJ) at the traffic lights. The hole on the road is very close to the intersection that takes vehicular traffics from Tema Station (Hockey Pitch Area), from National Lottery Authority Area and from Ussher area going to either Tema Station or Osu/ Ministries.

Even though this road is a dual carriage way and the portion that caved is a double lane, the hole has virtually reduced the lane to one, with some motorists being compelled to step two tyres in the hole and move carefully. The traffic becomes so thick and almost static at that portion, Mr. Sowah.

Hon. Metropolitan Chief Executive, having realized the danger the hole posts to motorists on this heavily used highway in the heart of the city for which you are the proud Mayor, your men or perhaps safety-oriented minds placed a stick with a red object atop the stick in the hole to warn motorists of danger.

Mr. Sowah, this lack of maintenance culture in Ghana is worrisome but it is more worrisome in cases of this nature whereby the lack of maintenance or repair can cause physical harm or death to the citizenry. You would agree with me, Honourable Sowah, that we have children, pregnant women, visually impaired persons and many other vulnerable people in society who are likely to fall into such holes on our roads in the city.

It is therefore surprising and a bit sad that for about two weeks now the Road Maintenance Directorate of the Accra Metropolitan Assembly (AMA) has not been able to seal this hole on the road at the CHRAJ traffic lights. Even if the AMA team does not have the capacity to seal the hole, the good thing to do is to liaise with the Department of Urbans Roads to do the needful. Much as we aim to make Accra the cleanest city in Africa, we should also aim highly to make it the safest in Africa. May I take this opportunity to also indicate that the high street including but not limited to AMA office near Bank of Ghana is dark at night and it is necessary that you work on this one too.

Undoubtedly Honourable Sowah, I know you know that if this hole in the road were to occur in other jurisdictions that safety is a matter of priority, the maintenance team would have repaired it with dispatch at night. In our neck of the woods, we see things like this to be no danger at all to warrant a swift remedial intervention by the city authorities.

The AMA is one of the big District Assemblies and as a local government entity, I am sure it benefits from the District Assemblies Common Fund (DACF), aside the direct taxes the AMA collects within the city. As such, sealing a small but dangerous hole on the road for the comfort of motorists should not have been a problem at all.

To this end, I hope eagerly that this correspondence will get to your attention and if it does, kindly sanction the needful to be done. Thank you for the good work you are doing and I wish you well in office.

Avoid greed, dishonesty and hypocrisy in galamsey fight – As...
49 minutes ago